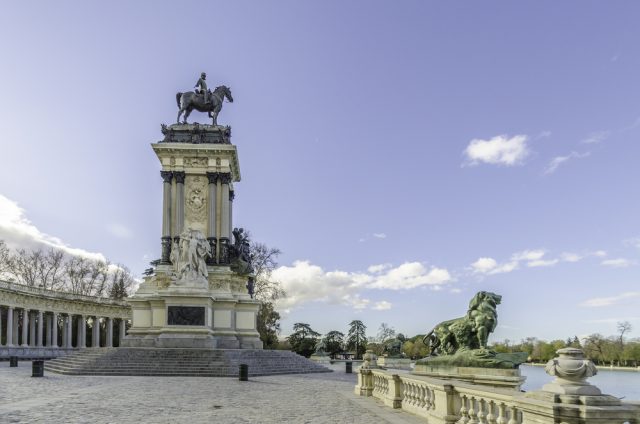 Spain has had its share of sculptors among its so many distinguished artists over the centuries. But even the most famous, like Eduardo Chillida and Juli González, are pikers when it comes to the number of people who’ve seen the work of a predecessor whom relatively few (and outside Spain, likely next to no) people these days have even heard of. Allow me to introduce you to Mariano Benlliure y Gil, Madrid‘s public sculptor par excellence.

If you’ve visited Spain’s capital, you’ve definitely seen the work of the 19th century’s last and arguably all-time greatest maestro of realistic sculpture, who became famous enough that he was even depicted on a national banknote in the 1950s. Born in Valencia in 1862, by 1887 Benlluire had set up shop permanently to Madrid, where he died 50 years later After starting out as a painter like his two brothers, a visit to Rome brought him into contact with the sublime work of Michelangelo Buonarroti, which sealed his vocation as sculptor.

And thanks to his talent, Benlluire did achieve his own considerable reknown, certainly within Spain but also beyond, in Europe (he wont the Medal of Honour at the 1900 Paris World’s Fair) and even to an extent across the pond in Latin America. His highest-profile and best known work is the 1928 equestrian statue of King Alfonso XII that’s the centrepiece of the grand monument crowning the pond in Madrid’s Retiro Park.  Very nearby in the park, he was also responsible for another equestrian statue, depicting General Martínez Campos, leader of the coup d’état which put Alfonso on the throne by overthrowing Spain’s short-lived first republic in 1874.

Outside but near Retiro Park there are several more Benlliure statues. Just across from the park’s western edge, across from the Casón del Buen Retiro (a research annex of the Prado Museum) is his statue of early 19th-century ruler María Cristina, and just a hop and a skip away, one of the painter Francisco de Goya, right outside the Prado’s north entrance. 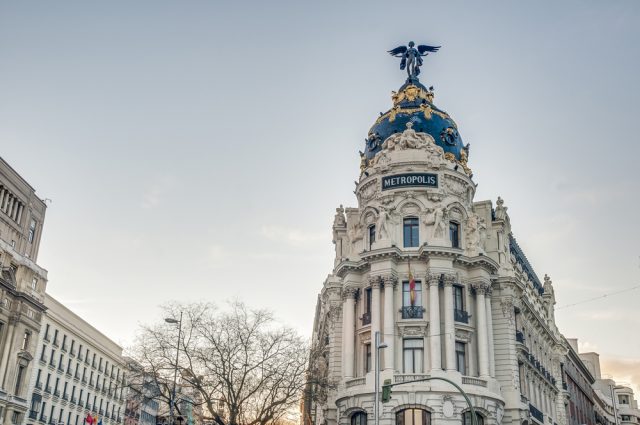 Next to the Basilica of Our Lady of Atocha, its onetime convent became the Pantheon of Illustrious Men around the turn of the 20th century, and among the illustrious tombs are three by Benlliure, of 19th-century politicians José Canalejas, Eduardo Dato, and Mateo Sagasta.

Just a five-minute stroll to the west of here, one of the city’s most iconic street corners is that of Gran Vía – the Broadway of Madrid – with Alcalá Street. Crowning the Metropolis Building (above), an elaborate 1911 Beaux-Arts affair housing a major Spanish insurance company, is a dome adorned with a number of statues, the main grouping of which is “Protection Against Fire and Assistance to the Labour World”, three figures – one female, a stand-in (or rather, sit-in) for the family, and two males, representing fire and labour.

A bit farther along Alcalá, tucked above the display windows of the Topshop women’s wear emporium in the Puerta del Sol, you’ll spot a placque marking the spot where in 1912 the aforementioned José Canalejas, then prime minister, was assassinated. 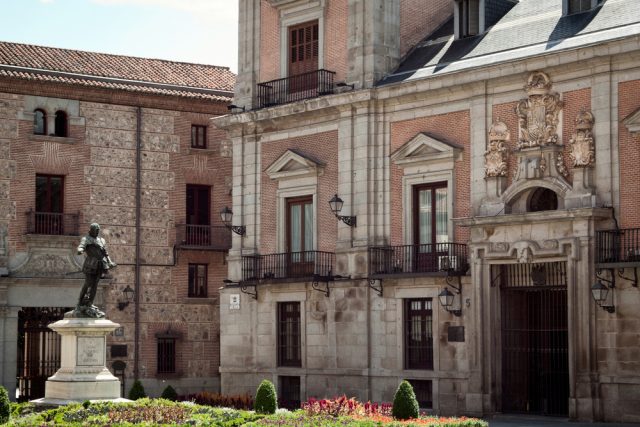 Just west of Puerta del Sol, the intimate Plaza de la Villa dates back to the 15th century and features several historic landmarks along with Benlliure’s 1888 depiction of Álvaro de Bazán (above), a distinguished 16th-century admiral who was never defeated in battle.

A few blocks from here, just north of Gran Vía in the lively Chueca district, the Plaza del Rey is a nice little square with pride of place given to a heroically posed 1891 statue of Leuitenant Jacinto Ruiz, a hero of the local uprising against the May 1808 invasion by the troops of Napoleon Bonaparte.

The last major stop on our tour is the royal Oriente Palace, whose extensive gardens out front star another prominent Benlliure work, an imposing monument to 22-year-old Corporal Luis Noval, who became a patriotic icon when he sacrificed himself during a 1909 uprising in Spain’s Morocco enclave Melilla.

All these only scratch the surface of this sculptor’s contribution to Madrid’s public art. You can find a complete itinerary here, although it’s in Spanish. And a final note: if you happen to be in the lovely Mediterranean city of Alacant (Alicante), not far from the sculptor’s hometown Valencia, a half hour inland in the town of Crevillente there’s a Mariano Benlliure Museum which displays some of his smaller works.