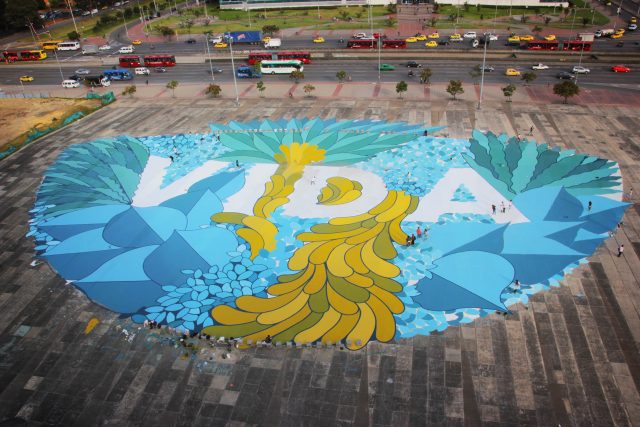 “Five heads, ten hands, one heart” – that’s how the group Boa Mistura (Portuguese for “good mix”) summed itself up when it was founded by a quintet of 15-year-old boys (yep!) in Madrid in 2001. And in the 17 years since, this multidisciplinary team of artists with street-graffitti roots has been spreading messages of peace, light, and colour not just in Spain but all across the planet.

Now the group has grown to seven (including one woman), and it sees its work these days “as a tool to transform the streets and create ties between people; we feel a responsibility for our cities and the time in which we live”. The aim is to surprise, inspire, and reach the hearts of everyone who sees their work, and their mission has taken them thus far to Algeria, Brazil, Chile, China, Colombia, Georgia, Kenya, Mexico, Norway, Panama, Serbia, South Africa, the UK, and the USA.

It was admittedly a bit rough going at first – including for example run-ins with authorities for “defacing public spaces”, but over the years, the powers that be in cities around the world as well as in the worlds of art, architecture, and urbanism have come to know and appreciate these talented young artists. They’ve developed projects with the United Nations, Oxfam, and the Red Cross; snagged exhibitions in modern art museums like Madrid‘s Reina Sofía Museum and Rome‘s MAXXI; and travelled the world not just creating their art but giving talks and symposia at universities and congresses.

And then there is Boa Mistura’s main canvas: the streets and buildings of the world. It started with various projects in their hometown Madrid, perhaps most notably La Cebada Market in the central La Latina quarter, transforming its dowdy exterior (a  1950s construction replacing the original historic market) into a gaily multihued bit of business built around the huge slogan Llena la Vida de Color (Fill Life With Colour).

And as mentioned above, they’ve very much taken their act on the international road, as well. Across the Mediterranean in the capital of Algeria, the Algiers old quarter may be a UNESCO World Heritage Site but these days is seriously run down. To help spruce up at least one corner of  the quarter, in 2012 Boa Mistura were invited down by the local Cervantes Institute (Spain’s version of the British Council) and created ALEGRÍA (JOY, above), incorporating friendly graffitti created by local residents.

Hopping across the pond, one of their favourite destinations is Colombia, where they’ve worked in Cali, Buenaventura, and Bogotá. Of particular note is Plaza de la Hoja in one of the capital’s housing estates for victims of the country’s long guerrilla war, since 2015 emblazoned with an 5,000-square-metre (more than 53,800-sq.-foot) design centred around the word VIDA (Life, top), meant to remind the 457 families who live here to embrace life and work together to build their futures. 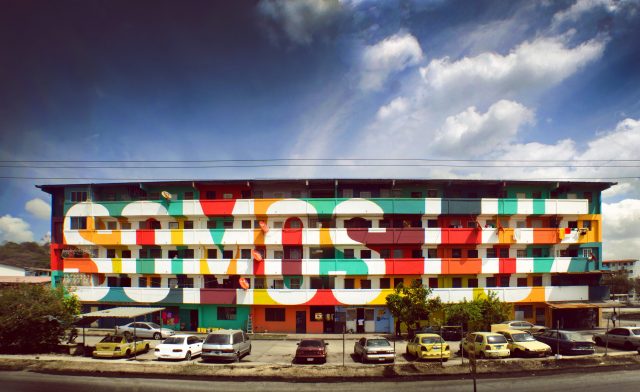 Heading to Colombia’s neighbour to the north, Panama, Somos Luz (We Are Light, above) is the 2,000-metre (6,560-ft.) message splashed across the Begonia I block of 50 flats in the poor El Chorrillo neighbourhood – painted with the help of the residents themselves and extending throughout the public areas of the building, to corridors and stairways, as well.

Colombia’s neighbour to the south also hosts several BM projects, such as the one in the São Paulo favela (slum) Vila Brâsilandia. Called Luz nas Vielas (Light in the Alleyways), it’s transformed various passageways from drab to cheerful, complete with uplifting one-word messages – MAGIC, BEAUTY, LOVE, PRIDE, and the like – readable only from a particular vantage point.

Boa Mistura plans to keep bringing its uplifting messages to cities around the world. Who knows – maybe the next one will be yours?