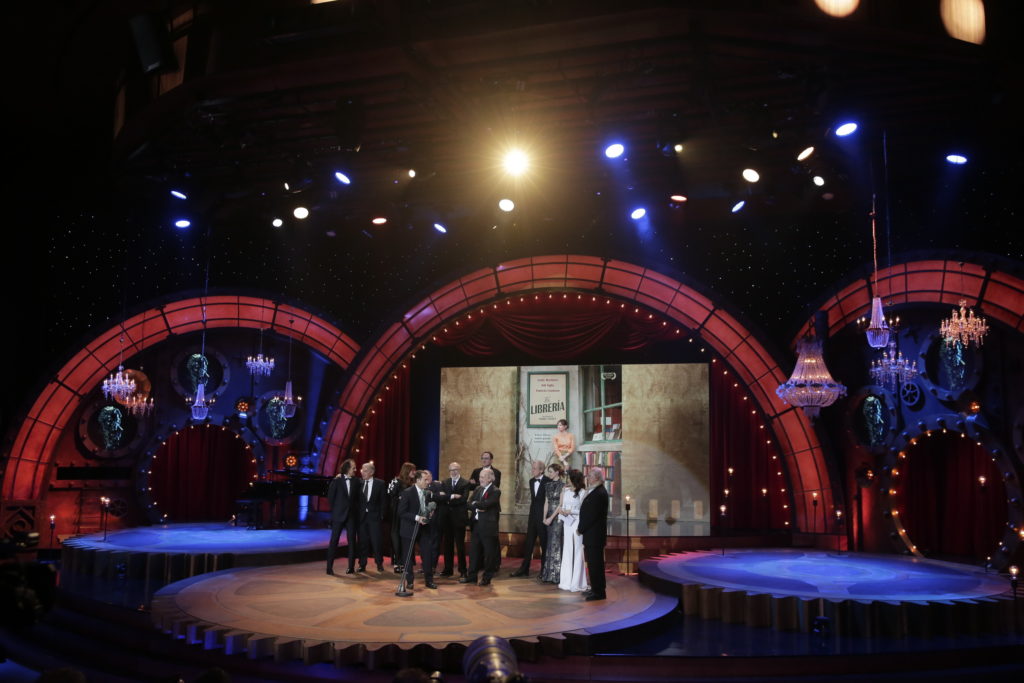 Curtain up, light the lights! This past Saturday, the Academy of the Cinema Arts and Sciences of Spain held its 32nd Premios Goya gala awards ceremony in Madrid (named after one of the country’s most famous artists) to honour the top achievements of 2017 in Spanish cinema, which has been marked by masterpieces for much of the late 20th century but especially in recent decades evolved into one of Europe’s – and indeed, the world’s – most dynamic and distinguished.

On the surface, it was a pretty high-profile night for women, for example including two female directors for Best Picture nominees (Isabel Coixet, who actually took Best Director as well as Best Picture, and Carla Simón, who ended up winning for Best New Director); the evening’s Honorary Goya presented to diva actress (and 2000-2003 Academy president) Marisa Paredes; and many attendees (and occasionally the TV screen itself) flashing red fans – oh là là, how very Spanish! –emblazoned with #MÁSMUJERES (More Women), following the example of the USA’s Golden Globes and #MeToo movement. On the other hand, plenty of commentators dismissed all that as hypocritical posturing, lip service, and empty slogans, given the relative dearth of presence – not to mention actress Goya nominees – of females in Spain’s film industry; comic actress Pepa Charro (loved her in Almodóvar’s zany I’m So Excited!) even delivered a pointed sobering lecture about the problem onstage.  Oh, and Best Animated Short was unironically and lovingly bestowed upon Woody & Woody, celebrating director Woody Allen, now again controversial for his own long history of #MeToo issues. Terrible timing, guys.

Be that all as it may, starting off with a gerbil joke (don’t ask), the glitzy three-hour affair was cutely emceed by a facetious pair of funnyman actors (above), touseled and on occasion charmingly potty-mouthed Joaquín Reyes and bespectacled Ernesto Sevilla (who saucily flashed a leg tattoo with the Spanish phrase for “you can’t get blood from a stone”), who in addition to mugging and goofing around the premises read out a few gigglesome tweets coming in from viewers – and finally, for viewers at home, ended up getting squashed by a huge cartoon foot, à la Monty Python.

In sum, the proceedings kept everyone both in the room and glued to the boob tube entertained with a review of last year’s cinematic highlights, personalities, and landmarks. We were also treated to shots of a handful of Spanish international celebs in the audience, most notably Bardem (a Best Actor nominee for Loving Pablo, about Colombian narco lord Pablo Escóbar) and Casas (up for Best Actress in the same movie). And OMG was I also chuffed to get another taste of comic actress Rossy de Palma – an old favourite of mine from Almodóvar’s long-ago comedy days – as co-presenter of Best Animated Film.

There were 29 quite diverse categories – wardrobe, cinematography, soundtrack, special effects, and so on – so obviously I can’t list them all, nor give the blow-by-blow, but the five top awards of the night, each walking away with a chunky grey bust of the great painter (man, that thing looks heavy!) were:

La Librería (The Bookshop) is a UK co-production based on the eponymous 1978 Penelope Fitzgerald novel The Bookshop, this made Goya history as the first English-language Best Picture. It’s the tale of an English widow who opens a bookshop in a coastal English town in 1959, and the very mixed reactions she engenders. The movie’s in English, stars a largely British cast, and of course was largely shot in England, though some filming was done in Barcelona. Helmed by Best Director Isabel Coixet, this garnered the second-highest number of Goya nominations. I found it especially eye-opening to witness the performance of Best Supporting Actor nominee Bill Nighy, whom I’d come to associate with creepy turns in the likes of Pirates of the Caribbean, Underworld, and I, Frankenstein. Nighy’s œuvre, though, is far more varied, with more than 60 films including Love, Actually and The Best Exotic Marigold Hotel, as well as plenty of distinguished theatre and television roles. 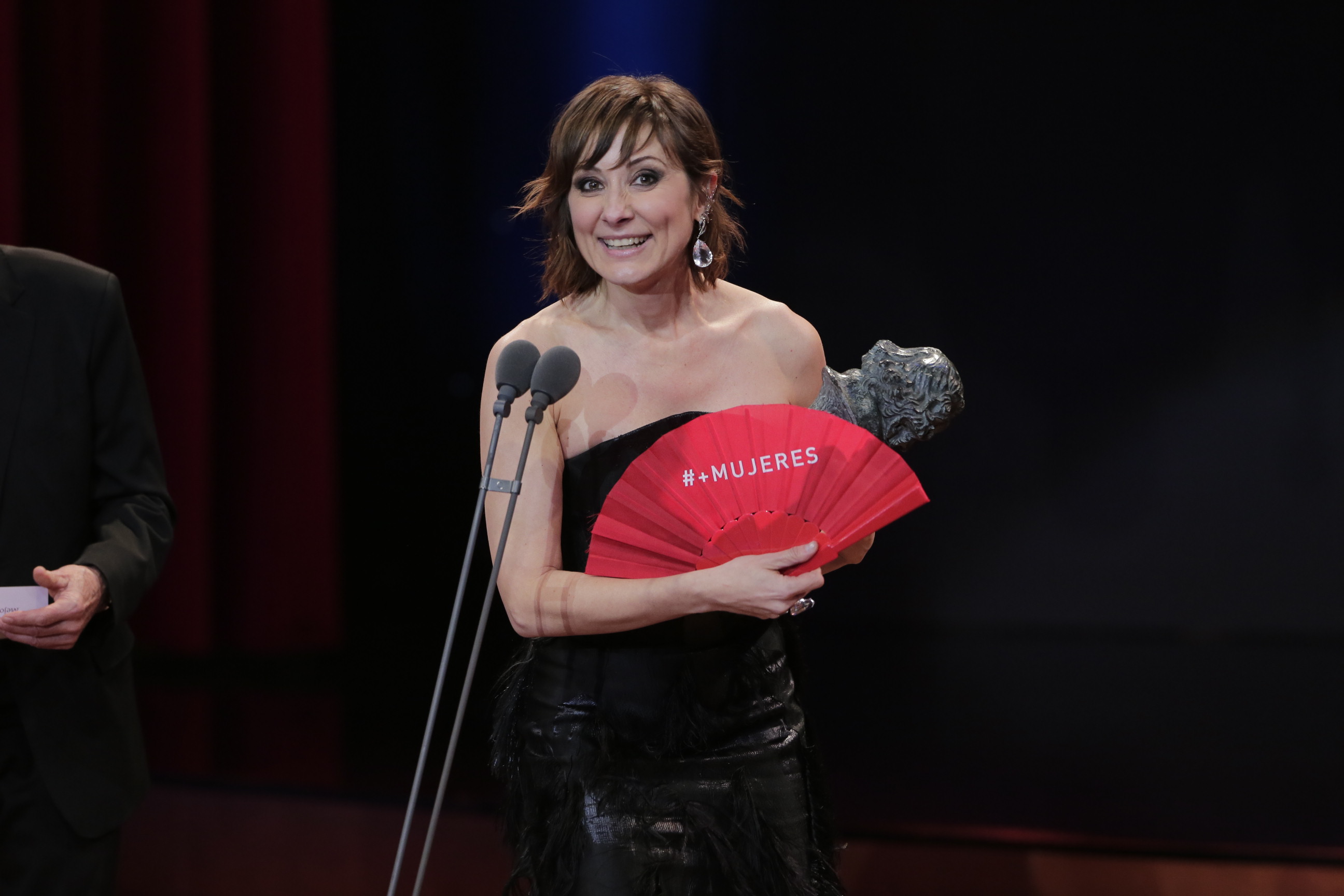 Madrid-born Nathalie Poza, 45, has been in the business for more than 20 years, and on Saturday grabbed the Goya for her emotionally charged role as a woman driving her dying father from Andalusia to Barcelona in a desperate attempt to find him life-saving treatment in No Sé Decir Adiós (Can’t Say Goodbye), which was also nominated for Best New Director and Best Supporting Actress. If you’re an Almodóvar fan, you may remember her powerful performance in 2016’s Julieta, about a woman reliving her checkered past. 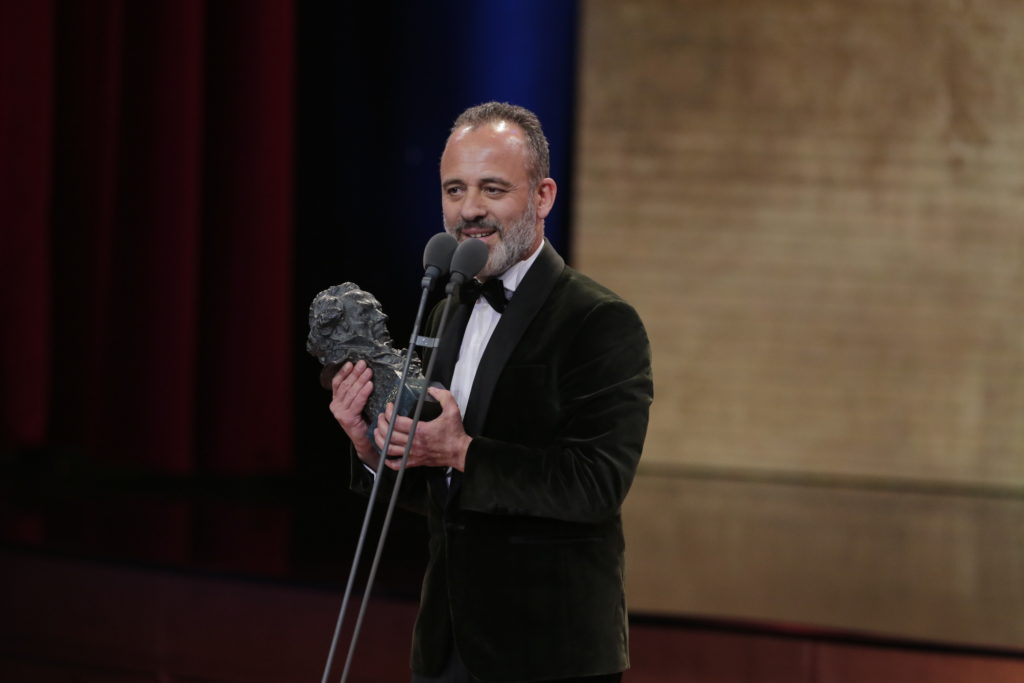 Hailing from Asturias in the north of Spain, bearded Javier Gutierrez took top honours for his portrayal of a beardless would-be writer in Seville who goes to unusual, even drastic lengths for inspiration in El Autor (The Author, see below). At age 47, Gutiérrez is a veteran of more than 50 films (including one I got a kick out of in 2016, the actioner Assassin’s Creed, based on a popular video game, in which he played the Spanish Inquisition’s top bad guy, the actual historical figure Friar Tomás de Torquemada). 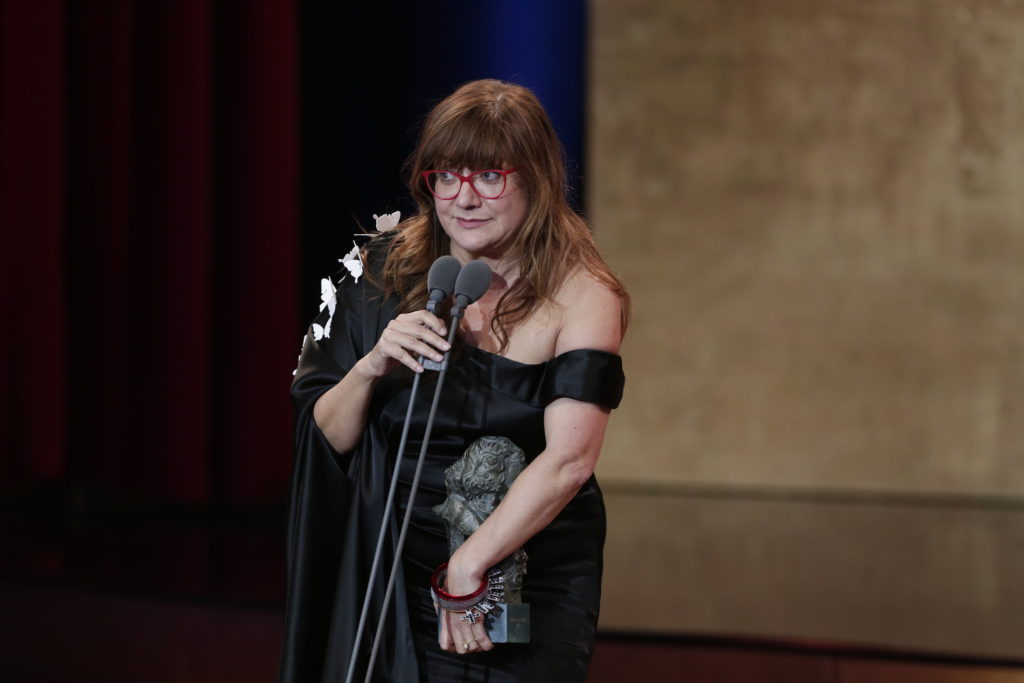 Winning for La Librería (see Best Picture, above), bespectacled Isabel Coixet is a 57-year-old from Barcelona who’s a multiple Goya laureate (including Best Director back in 2006) and has helmed nearly two dozen films since 1984, in recent years including several which like this one have been in English, directing distinguished actors such as Juliette Binoche, Gabriel Byrne, Geraldine Chaplin, Ben Kingsley, and Jonathan Rhys Meyers. Unsurprisingly, along the way she’s also been the recipient of many other awards and honours in the past 34 years, including France’s prestigious Order of Arts and Letters in 2015.

This was the most prominent of the awards for this year’s most nominated film, Handia, a quirky costume drama based on real early-19th-century events (see below for more details). Sharing credit are Basque screenwriters Aitor Arregi and Jon Garaño (above, both of whom were also nominated for Best Director), along with José Mari Goenaga and Andoni de Caños.

Finally, it’s also well worth taking a look at the four other outstanding Best Picture nominees:

Directed by Manuel Martín Cuenca, it’s the story of an untalented, frustrated would-be writer from Seville who resorts to inciting drama in those around him to be able to write about it (for the record, something I’ve never done, but hmmm, it’s not a half-bad idea!). El Autor garnered nine Goya nominations, including best director, and won two, the aforementioned Best Actor Javier Gutiérrez and Best Supporting Actress Adelfa Calvo.

This autobiographical Catalan-language film helmed by Best New Director winner Carla Simón is about the first summer of a six-year-old Barcelona girl in a small country town after being adopted by her uncle’s family after the death of her mum from AIDS. With eight nominations, it also won for Best Supporting Actor and Best New Actress – and was also nominated for best director and best original screenplay. It was Spain’s entry for Best Foreign Film at this year’s Academy Awards but didn’t make the cut. Nonetheless, it’s a bittersweet gem indeed.

The year’s most nominated film, with 13, this is an 1840s period drama based on real events, in which a man tours his giant younger brother (2.42-metres/7’9”) to crowds throughout Europe, as the Giant of Altzo, a town in the Basque Country province of Gipuzkoa, a half hour south of San Sebastián. The 24-year-old Basque who plays the giant, Eneko Sagardoy (also winner of the Goya for Best New Actor) is only 1.84 m (6 ft.) tall, which is one reason another of the film’s ten Goyas – besides the aforementioned Best Original Screenplay – was Best Special Effects (others included Best Original Score and Best Cinematography).

Ouija boards and demonic possession are central to this somewhay Hitchcockian mystery/horror movie based on real events in Madrid in the early 1990s, with 17-year-old Madrid-born actress Sandra Escacena in the title role and veteran Ana Torrent playing the psycologist who takes her case on. It’s directed by 45-year-old Valencian Paco Plaza, who in his 23-year career has made something of a speciality of horror films. Verónica got seven nominations and won for Best Sound – and after all, when it comes to scary movies, sound is as or more important than any other factor, right?

Whew, what a lineup – outstanding, every one of the talents nominated. And it all sure left me looking forward to 2019!