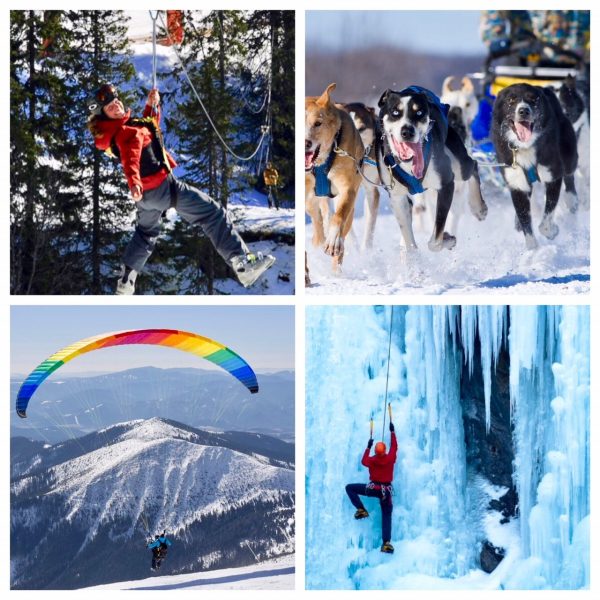 When it comes to winter activities, skiing and snowboarding (and to a lesser extent ice skating) understandably get most of the attention. But these days an increasing number of people are experiencing awesome winter holidays without sliding down a mountain on one or two planks. So if you’re a non skier/snowboarder, travelling with one, or just want to add some extra zing to your mountain fling, check out these nine thrilling alternatives – some of them fit for all ages – others a whole lot more challenging!

Invented in St. Moritz, Switzerland back in the late 19th century, hurtling down twisty, banked tracks in two- or four-person sleds at speeds of up to 150 kilometres per hour (93 miles per hour) is obviously not an activity that’s widely accessible, even at many winter resorts. The great exception is St. Moritz itself, along with former Winter Olympics facilities that still maintain their bobsleigh (also known as bobsled) tracks for public use; see below for examples. What a rush!

Where: In Europe, you can book bobsleigh rides in St. Moritz, and you might also consider Innsbrück, Austria, site of the 1976 games, where OlympiaWorld has a 1,270-metre (4,167-foot) track that operates in both winter and summer. Across the pond, folks can join the fun in Lake Placid, New York and Salt Lake City, Utah.

Mush! You can either snuggle under a layer of blankets and enjoy the ride, or stand at the back and take the reins. You’ll need a firm foot on the brake pedal which digs a steel prong into the snow – and off you go, driving a team of up to 16 enthusiastic dogs at up to 16-23 kph (10-14 mph).

Where: Top spots in Europe include Ariège in the French Pyrenees (includes a night in an igloo and snoe-shoeing), and across the pond, Snowy Owl near the winter resort of Fernie in the south of Canada’s British Columbia province, as well as several spots outside Quebec City.

Now here’s something especially challenging! You’ll need a mountain guide to belay you on ropes, but first of all ask him or her for advice and suggestions on the most suitable ice-climbing routes. Kit yourself out with climbing boots, crampons, two ice axes, a helmet, and a harness – all included at the venues below. You can also climb and abseil down frozen waterfalls or man-made ice towers.

Where: In France’s Trois Vallées area, check out Guides Courchevel; over in Italy’s Lombardy region, the Valtellina area is a great option, with man-made ice-climbing walls in the mountain resorts Livigno, Madesimo, Lanzada, and Aprica. And the Aosta Valley town of Cogne  boasts more than 150 frozen waterfalls (above) that attract climbers from all over.

Gateways: Courchevel is just over two hours from Geneva, 2½ from Lyon. From Milan, Valetillina and Cogne are 2½ to three hours.

You take the wheel of a car or handlebars of a motorcycle and careen around a dedicated circuit of sheet ice – though of course after training sessions, and in some cases accompanied by an instructor with dual controls. Besides the thrill of the circuit, you’ll also gain skills that will come in very handy if you have to drive winter roads at home! (A lower-key version of this is ice karting, with go karts.)

Where: Three great spots in France include Val d’Isere Ice Driving, or three hours north in Flaine at Circuit Glace or Ice Driving Val Thorens. This last is the highest circuit in Europe, sponsored by Formula One race driver Alain Prost.

Getting There: The area is three hours from Lyon and a little less than that from Geneva.

Meaning “ski driving” in Norwegian, skijoring is being pulled on cross-country skis by a galloping horse, large dogs, or snowmobile or motorbike – usually on a specially groomed track. It can be pretty intense, fast-paced and adrenaline packed.

Getting There: From Geneva, Mont-Blanc is about hour and Méribel a bit over two hours.

If you like the idea of skiing off a mountain, being whisked into the air and soaring over dramatic views, then this is a sport for you. The weather is all-important, and you’ll sometimes be prevented from going at the last minute or you’ll need to be prepared to fly at short notice. You start with a tandem flight with an instructor.

Where: Try this in Switzerland at Alpine Adventures Zermatt, or in France at Verbier Summits www.verbier-summits.com.

Getting There: Zermatt is 3½ hours from Zurich, Verbier is two from Geneva.

This is using a kite to turbo-charge your skiing (or more commonly, snowboarding), to speeds of sometimes more than 110 kph (68 mph) and including gnarly airborne moments. It’s the terrain that matters – you’ll need an open snowfield or a firmly frozen, snow-covered lake. A medium strength wind is best when you’re learning, but before you know it you’ll be jumping and travelling at speed. Remember to bring wind and waterproof clothing, as the wind chill can drop temps to -30ºC (-22ºF).

Where: In Europe, Scandinavia tops the list when it comes to venues. Norway’s Hardangervidda National Park near Geilo, northwest of Oslo, is one of the world’s top spots, with 3,422 square kilometres (1,321 sq. miles) of rideable terrain. Also try Snowkite Sweden at Härjedalen, north of Stockholm on the Norway border. There are a number of good snowkiting spots over in North America, as well, with many aficionadors pointing to Skyline Snowkite Complex (town of Fairview) up in Utah’s Wasatch Mountains as best for awesome snow, great wind, and fun terrain.

Getting There: Oslo, four hours from Geilo; for Härjedalen, Stockholm is seven hours by road, one hour by air. Skyline is 90 minutes south of Salt Lake City.

Appropriate and fun for young and old alike – even four-year-olds can slide down slopes in tubes that look like giant rubber rings or car-tyre inner tubes. To go up the mountain you hook the ring to a rope-tow lift and sit inside it (some operations have more elaborate set-ups such as “people movers”; as in Vail, Colorado, below). Zipping back down is as much fun as tobogganing!

Where: There are myriad snowtubing operations in various countries, and chances are you can find one at your favourite winter resorts. But two of my own favourite is the multilane tubing hill at Adventure Ridge in Vail, while the “funpark” Mille8 in the French Alps’ Les Arcs offers a variant for kids more akin to a mini-luge.

This exciting and increasingly popular activity, most of us already know, involves soaring between platforms built around forest trees on thick steel cables. It’s better known as a warm-weather destination draw, but is increasingly showing up at winter resorts – sometimes complete with heated platforms. Totally safe and fun for all ages!

Where: At 250 metres (820 feet) over the snow, the world’s highest zipline is La Tyrolienne (above), between Orelle and Val Thorens (near the legendary Méribel and Courchevel resorts, to which it’s linked). The 1,300m (4,265-ft.) takes just a minute 45 seconds, but at speeds of up to 105 kph (65 mph), it’s a frosty rush indeed! Another notable Euro winter zip is Sweden’s Camp Åre (top), part of one of Scandinavia’s foremost ski/snowboarding resorts. Across the pond, try Ziptrek Ecotours at Whistler in the Canadian Rockies. North America’s first zipline complex offers combination of 11 runs, including North America’s longest and another with a 30-storey drop!

Getting There: Get to Val Thorens via Geneva or Lyon (both around 2½ hours). From Stockholm, Camp Are is an hour’s flight, or more than six by train or road. Whistler is just over an hour and a half from Vancouver.