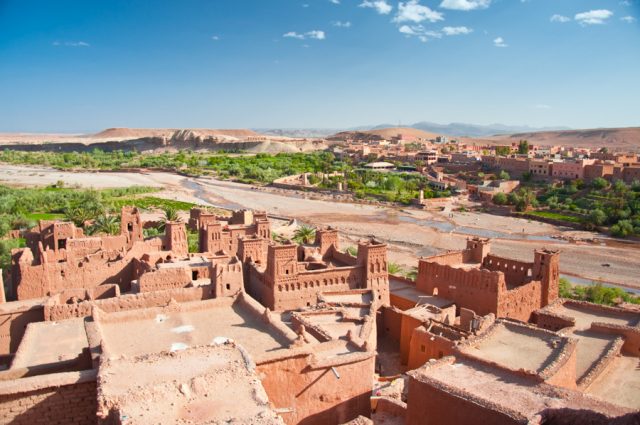 Just a half-hour ferry ride from Spain across the Strait of Gibraltar lies another exotically different world. The Kingdom of Morocco is a true cultural, culinary, and eco treasure trove, from Imperial Cities like Marrakesh, Fez, Meknes, and Rabat to huge, dynamic Casablanca to funky, historic ports such as Tangier and Essaouira. And for the even more adventurous, expeditions into Morocco’s hinterlands unlock what you might call the  deep essence” of this ancient land. Topping this list, I’d have to say, would be Morocco’s Berber gateways to the Sahara Desert: Aït-Ben-Haddou and Ouarzazate.

The journey southwest on National Highway A9 from Marrakesh to these atmospheric apparitions from the past will take 3½ to four hours, depending on speed and stops along the way, and can be done via all-day organised tour or a hired taxi – or for more flexibility and the possibility of an overnight stay, even driving yourself.

After two hours of driving through arid plains, you’ll start climbing into the hills until reaching Morocco’s highest major mountain pass (2,260 metres/7,415 feet), Tizi n’Tichka. Considered the actual “gateway to the Sahara”, it offers sweeping views as you come out the other side over the low, semi-desert hills and plains through which you’ll continue another hour and 20 minutes to Aït-Ben-Haddou (top).

As you approach this imposing collection of mud-brick buildings huddled together on a hill, perhaps you might have a sense of déjà-vu, or at least vague familiarity. For very good reason: this ksar (fortified village), dating back to the 17th century but reflecting traditional building forms from much earlier, is so uniquely atmospheric that it has been used as a backdrop for some two dozen films and TV shows. It started in 1962 with The Last Days of Sodom and Gemorrah, and its most recent appearance was as the slave cities of Yunkal and Pentos in Game of Thrones‘ third season; along the way, other have include Gladiator, Lawrence of Arabia, Babel, Kingdom of Heaven, and The Mummy.

It goes without saying that one of Morocco’s most special places is a UNESCO World Heritage Site, with notable landmarks including a granary at the top and a mausoleum at the bottom. Only a handful of families still live among these old buildings, with most opting for the better amenities of the adjacent modern village on the other side of a small river, but guides and handicrafts sellers are of course on hand to cater to visitors. 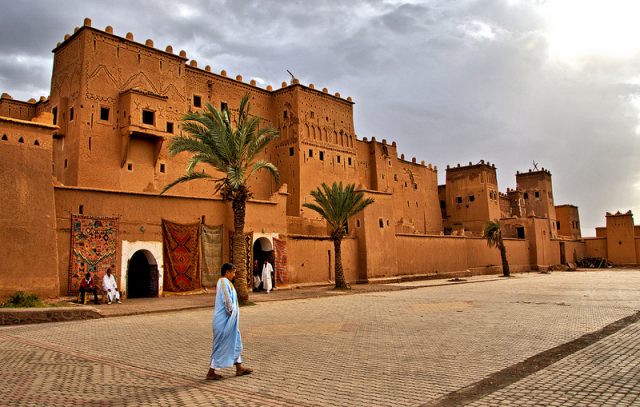 Just another half hour down the road, the old quarter of the provincial capital Ouarzazate (pop. 71,000) is another UNESCO site with a similarly mediaeval look, but on on a somewhat larger scale, with Taourirt Kasbah (above) at its core – abandoned but still open to visitors. A wander through the old Tassoumaat medina provides a look at a side of local life that still has the feel of a time capsule. Soak up the colourful atmosphere of the central market and the city’s central square, Place Al-Mouahidine.  The city also makes a great base for trekking excursions into the Sahara – on foot, camel, horse, or ATV.

But Ouarzazate’s main claim to fame lies elsewhere. Although Aït-Ben-Haddou has perhaps logged more screen time, it’s larger, better equipped Ouarzazate that has become the Hollywood of Morocco, home to Atlas Studios (actually on the outskirts), whose sets and facilities can be toured. Back in town, across from the Taourirt Kasbah you’ll find a small, 11-year-old Musée du Cinéma, with props, sets, equipment, and other displays covering the from the area’s more than half century of moviemaking history.

And that’s a wrap, to an amazing desert corner of an amazing country!