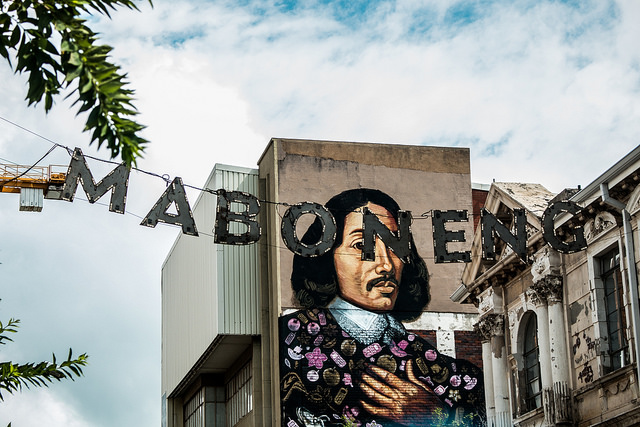 South Africa‘s capital is positively afroth these days in creativity and the arts, and one of its premier epicentres is Maboneng Precinct. Centred on Fox and Kruger Streets, a quick cab ride east from Johannesburg‘s Sandton business district and overlapping Jeppestown, another creative neighbourhood, this once shabby, no-go inner-city district has since the middle of the last decade been reinvigorated and made “cool” by artists, hipsters, and entrepreneurs, à la Brooklyn‘s Williamsburg, Shoreditch in London, and various other urban hotspots around the world. And if you visit Joberg, it’s a must.

The name means “Place of Lights” in the Sotho language, and Maboneng is now indeed a brilliant place, with a slew of public artworks, galleries, shops, eateries, and even accommodations. Folks both young and not so young here are unafraid of the new, and even small ideas can get turned into big deals.

William Kentridge and Jonathan Liebmann are prime examples. Kentridge, 62, is one of the city’s top artists, known for his prints, drawings, and animated films, and runs a pair of art-oriented centres here (one of which is whimsically called The Centre for the Less Good Idea, an arts incubator where you might expect just about anything). At age 33, Liebmann has been the area’s foremost property developer here for the past decade.

They and hundreds of other creative Johannesburgers have forged a remarkable, exciting destination that should be part of any visit to Jozie (as locals fondly dub their city). Here are eight highlights:

On Fox Street, the original project which jump-started the neighbourhood is a hip mix of art galleries, book shops, a restaurant called Canteen, and a popular Sunday marketplace.

Besides a theatre screening indie and classic films from South Africa and around the world, the Bioscope also boasts a restaurant and a terrace with an outdoor screen and special events such as barbecues – and offers some impressive urban views on top of it all.

A “design” hostel which in addition to private rooms, a bar, jacuzzi, and rooftop terrace also offers tours of the city.

Established in 2015 and last year expanded to the classic Cosmopolitan Hotel, built in 1899, as a complex including not just the gallery but the cool Sphere Monk restaurant and bar, and even a department store.

An innovative theatre with offerings including experimental works, storytelling, “immersive theatre”, and theatrical productions in various outdoor venues around the city.

Another cool accommodation, this arty bit of business offers 12 very affordable self-catering flats, each designed by a different local artist and usually themed on aspects of Johannesburg history.