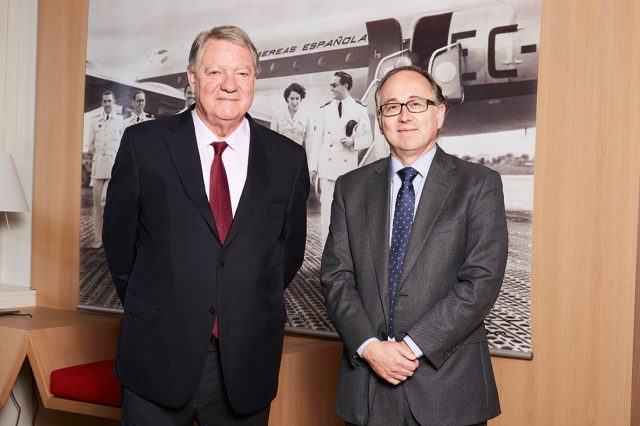 We round out our 90th anniversary year of Ronda Conversations between employees past and present – a look at where we’ve come from and where we’re going – with a chat with Xabier de Irala, Iberia’s president from 1996 to 2003, and current president and CEO Luis Gallego.  Past and present heads of an enterprise employing thousands, and of whom they speak with affection and great respect for the fine work our entire Iberia family has done and have yet to do.

Xabier was head of the airline when it was privatised in 1999, as well as when it became a founding member of the OneWorld alliance that same year. He was also there during the negotiations with British Airways to acquire a major interest in our company. His has been an absolutely key role in the recent history of Iberia.

Our president since 2013, Luis is in the cockpit at a transformative time for the highly competitive airline industry, confronting for example the challenges of the low-cost carriers, presiding over the increasing digitalisation of the company, and instituting productivity improvements which have helped immensely improve passenger satisfaction and make us the world’s most punctual airline.

And although these days change is the new normal, there’s one thing that remains constant: the passion for flying, for serving the people of Spain and the world, and transporting them for business and pleasure throughout the world.

Not to mention running a world-class business with a 90-year pedigree. And for that, comments Xabier, “the challenge is the same in all sectors: increase revenue, decrease costs, and surround yourself with the best people possible”.

You can read all of our Ronda Conversations, including this one, either by downloading this PDF or one by one here.