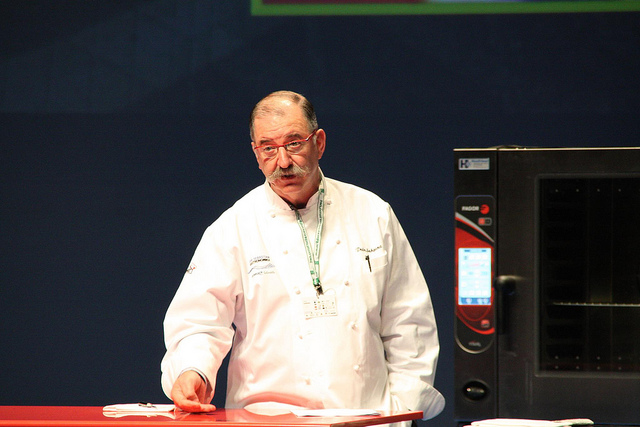 His folks wanted him to be a doctor. But growing up in San Sebastián in the 1950s, Pedro Subijana felt medicine wasn’t for him. And so when he was about to start medical school, and  friend encouraged him to apply instead to the Higher School of Hospitality and Tourism of Madrid, the die was set – perhaps thanks to that friend, the world lost a physician but gained one of its greatest living chefs.

In retrospect, it wasn’t all that surprising, really. Subijana did after all grow up with a gourmand for a granddad – an excellent cook and aficionado of the restaurants of the day. So that early culinary appreciation gave him a leg up at school, and that plus his skill at the stove and his irrepressibly outgoing, friendly personality afterward helped propel a meteoric career, and one marked by a great appreciation, too, for the Basque cuisine of his homeland.

After graduating, and attending another culinary institute, in the early 1970s Subijana worked in a number of restaurants, most prominently the famous three-star Madrid bastion of classical elegance Zalacaín.

It was in 1975 that he arrived at Akelarre, the restaurant in the town of Igeldo on the outskirts of San Sebastián, which was to become his home for the next 42 years and counting. Within five years he had not only become a co-owner but had moved to the forefront, with his great friend Juan Mari Arzak, of the emerging New Basque Cuisine movement, which under the influences of France‘s nouvelle cuisine was reinventing staid traditional fare in a lighter, less rustic, more refined way.

The restaurant and movement are both wild successes, with Akelarre garnering acclaim from restaurant critics and foodies alike, along with three Michelin stars, and jumping to the forefront of Spain’s fine dining restaurants. The innovations of Subijana and his colleagues also had ripple effects throughout Iberia, inspiring the likes of Ferrán Adriá and many others who have forged the reputation of Spanish gastronomy as an innovative leader on the global culinary scene.

To this day, Pedro is still directing the action at Akelarre, with its contemporary architecture in a bucolic setting (the name, by the way, means “witches’ sabbath” in Basque) with sweeping sea views. Kitchen classics include rice with snails and periwinkles in tomato/basil film, prawns cooked with french beans in flaming orujo (northern Spanish grape brandy), and cuttlefish roller with “rice crispies”.

And the newest chapter is still being written, with the opening just this past summer of the adjacent Hotel Akelarre, an exquisite, 22-room boutique property with a fantastic spa and another, more casual Subijana-directed restaurant called Oteiza – no doubt now firmly on Michelin’s radar as well. It’s a sign that we can expect continuing innovation from this towering master of modern Spanish cuisine.