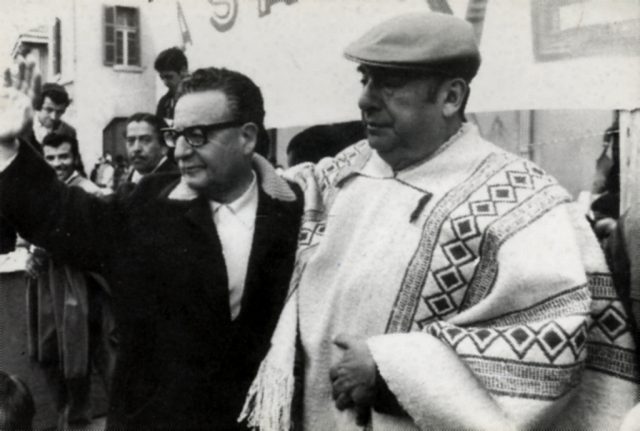 If Ricardo Eliécer Neftalí Reyes Basoalto (above with 1960s president Salvador Allende) were alive today – well, he’d be 113, but anyway he’d also be plenty bemused by the fact that so many visitors journey to Chile to experience the places he once inhabited and wrote of. This long, skinny country in South America‘s Southern Cone is packed with amazing attractions – vibrant cities; varied landscapes from Alpine to desert; winelands and mountains; and lovely beaches along an enormous coastline that stretched from the Tropic of Capricorn down to nearly the Antarctic. But when it comes to Chile cultural tourism, the man fellow Nobel literature laureate Gabriel García Márquez called “the greatest poet of the 20th century in any language”, Pablo Neruda, is in a class by himself.

Neruda (who, it was just very recently announced, did not die of cancer in 1973 as his death certificate stated, but may in fact have been murdered by the brand-new Pinochet régime he opposed) travelled a fair bit – thanks mostly to diplomatic postings in places like Spain, Argentina, Mexico, and France – but his heart and soul always remained in his native land, where visitors can experience his legacy – including former residences transformed into museums – in places like Santiago, Valparaíso, and Isla Negra.

Located in the Chilean capital’s increasingly hip Bellavista neighbourhood, this blue-and-yellow, multilevel house was built by Neruda in 1953 to hang out with his mistress Matilde Urrutia (the name is a Chilean expression meaning “uncombed’, referring to Matilde’s exuberant red hair). It was wrecked during the coup against Allende, and Matilde had it restored, as well as salvaging the items left by Neruda. The poet himself wrote of this abode:

The stone and the nails, the plank, the tile were joined:
here arose the house of Chascona with water that runs writing in its own language,
the brambles guarded the site with their bloody branches
until the scale and its walls knew their name.

As in Neruda’s other two houses (below), maritime themes also pervade La Chascona, and here, too you’ll find the author’s highest honour, the 1971 Nobel Prize for Literature. 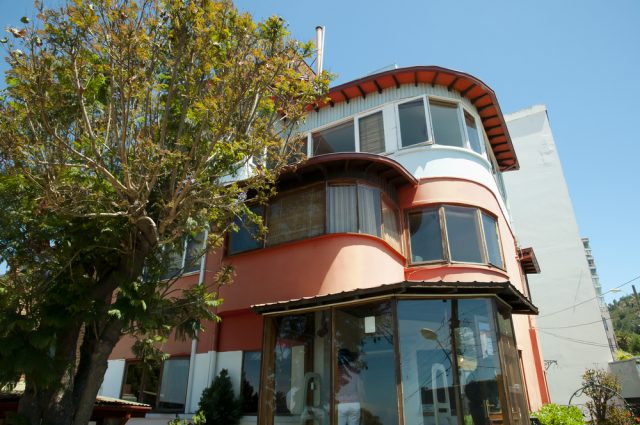 Amid the many colourful hills of this city on the coast an hour and a half from Santiago, this house on La Florida Hill was purchased by Neruda in 1959, and was his refuge when he spent longer periods of time in Chile. Also multi-level, it’s full of art (including a portrait of Walt Whitman) and eclectic mementos of his travels. Of it the poet rhapsodised:

The house grows and speaks,
it supports itself on its feet,
it has clothing hung on a scaffold,
and like springtime by the sea
swimming like a marine naiad
kisses the sand of Valparaíso,

let us think about it no more: this is the house:
all that is lacking will be blue,
what it needs is to flower.
And that is the job of springtime.

The house also fell into neglect after the Pinochet coup, until it was finally restored and opened to visitors in 1991; it was declared a national monument in 2012. 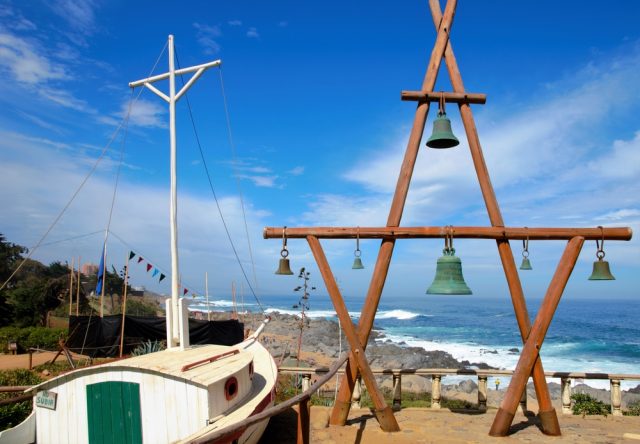 Down the coast just over an hour from Valparaíso, the holiday village and artists’ colony was the site of Neruda’s first house, a cabin on its rocky shoreline purchased in 1938 and expanded to over the years (including a wooden boat placed out front, above). With low ceilings, rough wooden floors, and narrow hallways, this rustic spot embodied for the poet one of the central symbols in his work: the sea. Here you’ll find many of the memorabilia collected over the course of a lifetime, especially maritime-related. From one of his sonnets:

The great rain from the south falls over Isla Negra
Like a single drop, transparent and heavy,
The sea opens its cold sheets and receives it,
The earth learns the humid destiny of a cup.

Neruda and his mistress Matilde used it as a hideaway, and after being expropriated by the Pinochet dictatorship it was subsequently returned to the family and today in addition to a museum is a cultural centre hosting exhibitions, conferences, and poetry recitals.