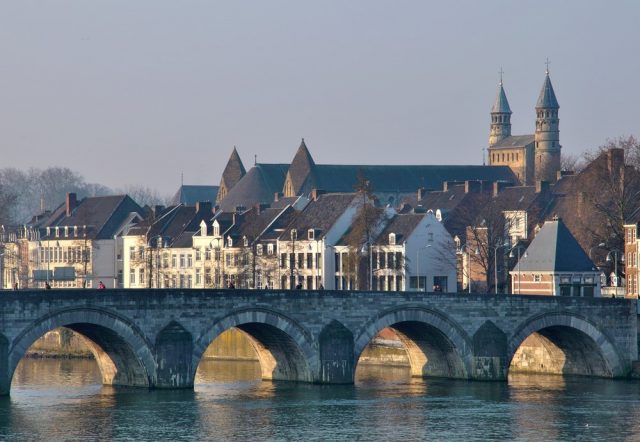 During a year when the European Union is commemorating the 25th anniverary of the momentous signing of the Maastricht Treaty which established the EU, no better time to take a look at this vibrant university city in the southeast Netherlands, on the border with Belgium and just over a couple of hours by train or car from Amsterdam.

With Holland‘s second highest number of national heritage sites after Amsterdam, this city of some 278,000 inhabitants (metro area 417,000) astride the Maas River can boast a history which stretches back to at least the Roman Empire, settlement of Mosae Trajectam, with extant remains including a road, bridge, religious shrine, public baths, granary, houses, walls, and gates. 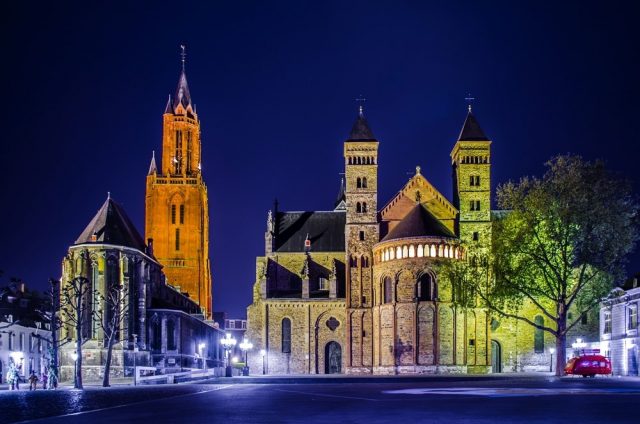 
The starting point for visitors is usually the Binnenstad, the old historic centre, anchored by the city’s largest square, Vrijthof (above), site of the 11th-century, mostly Romanesque Catholic Basilica of St. Servatius, various restaurants and cafés (just a handful of the city’s 400 or so); next to it, the Protestant, early 13th-century Sint Janskerk; and the city’s oldest existing house (first mentioned in the early 14th century), the red Spanish Government (so called because it was home to the military governor during Spain’s rule of the Low Countries), now home to the Museum van het Vrijthof, which showcases historic Dutch art as well as Maastricht history. You can also catch a boxy, glass-enclosed sightseeing tram here through the old quarter (you can see it in the video below).

Other notable Binnenstad squares worth a visit include the Markt (Market Square), right alongside the Vrijthof, where along with more cafés and restaurants you’ll find the imposing 17th-century Staadhuis (City Hall), as well as, yes, an open-air street market, on Wednesdays and Fridays. Nearby, the Onze Lieve Vrouwplein (Square of Our Lady) is another restaurant-lined charmer named for its main landmark, a Romanesque basilica with a massive, castle-like stone façade and which dates back to at least the 11th century. And over on Dominikanerplein, you’ll find Boekhandel Dominicanen, a late-13th-century Gothic church transformed into a uniquely atmospheric bookshop. If you can get here in December, by the way, several of these squares host the Netherlands’ only organised annual Christmas markets (even including a skating rink on the Vrijthof).

The mediaeval vibe continues once you cross the arched, 13th-century Sint Servaasbrug across the river to the Wyck district. Its Oud Wyck section is home to charming galleries, restaurants, and quirky antiques and other shops. Another section of Wyck called Céramique was redeveloped in the last couple of decades around the site of a pottery factory (above). It includes flats, restaurants, shops, and cultural institutions such as the 133-year-old Bonnefantenmuseum, housed since 1995 at a stylishly refurbed factory site, its collection a mix of Dutch/Flemish and European art back to the 13th century, and a growing body of 20th- and 21st-century works. (Another neighbourhood worth visiting for art mavens, by the way, is elegant, historic Jekerkwartier, just south of the Binnenstad on the same side of the river. Here are some of the city’s most popular art galleries in the city.)

Another very cool (actually, also literally) side of the city well worth mentioning, by the way, is the 10-kilometre (seven-mile) subterranean labyrynth known as the Maastricht Underground, a mix of tunnels – the beginnings of which date back to the Romans – used for defense, storage, and hiding (both people and treasure, such as from the Nazis during World War II).

One special event particularly worth noting, by the way, is the pre-Lenten carnival that takes place in various countries (Rio de Janeiro’s and New Orleans’ being perhaps the most famous) in February or March, depending on the year. In 2018 celebrated February 11-13, it packs the streets and squares of the old town with colourful floats and crazily costumed revelers engaged in copious drinking.