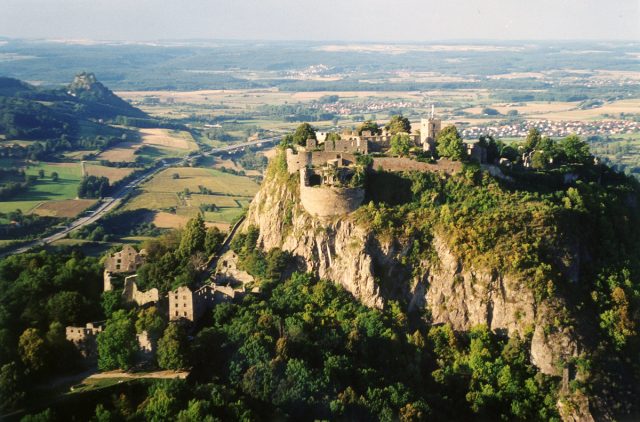 Anyone a fan of HGTV’s Castle Hunters, in which U.S. couples travel to Europe to find a stately pile to call their own? A Southwest Germany driving route known as the Burgenstrasse (Castles Road) will be right up your alley. But so it will be, too, if you’re a history buff, antiques and/or architecture aficionado, or gardens groupie. Because the state of Baden-Württemberg’s heritage preservation agency has 60 awesome estates, magnificent monasteries, and glorious gardens waiting for you to gawp at.

This area’s best known spots include Heidelburg, Lake Constance, Stuttgart, and Baden-Baden, and the half-dozen castles/gardens routes will take you to or near all of them. Flying into Düsseldorf, you can drive or take a train to their starting points in just over three hours or less, and route maps with plenty of supporting information are available to guide you on your journey of three to five days at a leisurely pace (more, of course, if you add side trips and attractions. Plus if you prefer to be more actively guided, there are also tour operators offering packages of varying lengths).

Having survived all manner wars, famines, plagues, and other vicissitudes of the passing centuries, these estates stand today as reminders of past emperors, kings and princes; of poets and thinkers; robber knights; and romantic tales of chivalry. Some provide atmospheric backdrops for open-air theater and concerts; for mediaeval banquets and romantic restaurants; lively costumed tours; and historical markets. Others are still occupied by aristocratic descendants or middle-class successors and are partially open to visitors. The oldest dates back to the 10th century, while the “newest” is a mere quarter-century old.

For a taste of all this magnificence, check out three of the most iconic and representative routes:

Start in the charming, ever-popular city of Heidelberg, whose beloved castle was the seat of the princes of the Palatinate; it dates back to the end of 13th century but was partially reconstructed after fires and centuries of decay at the tail end of the 19th. These days it also features Scharffs Schlossweinstube, a one-Michelin-star restaurant serving up elegant nouvel-European dining under the stars overlooking the city, its famous university, and the Neckar River.

Then, a mere 15 minutes southwest of Heidelberg, the lesser known, early-18th-century palace of Schwetzingen (right in the heart of German asparagus country!) was the summer palace of several Wittelsbach dynasty princes. The star here is one of Germany’s finest Baroque formal gardens, an enormous affair with straightaways, allées, rows of trees, a natural outdoor theatre, an indoor theater, and yummy eats at both its restaurant and courtyard café.

Just over a half hour south of here, the small city of Bruchsal is Europe’s largest asparagus producer as well as site of the 50-building, early-18th-century palace complex of the local prince-bishops, faithfully rebuilt after its near destruction in World War II and housing two museums, one devoted to a magnificent collection of porcelain, hunting weapons, and gold objects, the other to self-playing music devices including clocks, pianos, and organs.

Push onward some 40 minutes southward to yet another early-17th-century masterpiece, Rastatt Residential Palace. Modeled after Versailles, it’s one of this country’s largest Baroque castles with original Baroque interiors, including an extraordinary ancestral portrait gallery; a huge porcelain collection; a military history museum; and another devoted to various German freedom movements from the 18th century through the resistance in Communist East Germany.

This route then has three more stops, including the late-11th-century Alpirsbach Monastery and former boys’ boarding school, in the Black Forest; the marvelously atmospheric hilltop ruins of Hohentwiel Fortress, dating back to 914;and Burg Meersburg, looming over the eponymous Meersburg , a picturesque mediaeval gem on the shores of Lake Constance; sources differ as to whether the Burg was built circa 630 or in the early 12th century.

A variation on the first route, this one also covers Heidelberg, Schwetzingen and Bruchsal, then veers off about a half hour southeast to take in the UNESCO World Heritage Site of mid-12th-century Cistercian Maulbronn Monastery, one of Europe’s best preserved mediaeval complexes, its many buildings enclosed by doughty turreted walls and towers. Highlights include the Romanesque church, the Gothic cloister, and the fountain house, named of course for its fountain.

The next stop, some 45 minutes southeast, is Ludwigsburg Residential Palace, one of the largest Baroque buildings on the continent to survive in its original condition. It boasts sumptuous interiors with rare period furnishings and accessories; a theater; a ceramics museum, and another showcasing clothing from the 18th to 20th centuries.

(And BTW if you’re so inclined, you could add this stretch to the first route by driving 2½ hours from Meersburg to Maulbronn.)

Our third route starts at 12th-century Weickersheim Palace,  in the middle of the eponymous town of the scenic Tauber Valley, nearly four hours from Düsseldorf and an hour 45 from Heidelburg. With a country-estate feel and lovely 18th-century gardens, it also features a Knights’ Hall dating from 1600 and famous for its vast paneled ceiling with colourful hunting scenes.

After Weickersheim, head to Schloss Solitude, a Rococco/Neoclassical affair built for a duke in the 1760s on what’s now the western edge of Stuttgart and presenting a magnificent view across the Württemberg lowlands. The interior of the palace radiates splendour, and its grounds are also home to an academy for young artists and a museum devoted to 20th-century Stuttgart sculptor Fritz von Graevenitz. Also pay a visit to the nearby Sepulchral Chapel on Württemberg Hill, which King Wilhelm I had built in the 1820s in memory of his beloved wife Katharina, who died at a young age. Also offering spectacular views over Stuttgart, this monument to eternal love is considered Baden-Württemberg’s most romantic spot.

This route then continues through the lovely countryside of the Swabian Alb an hour 20 minutes to the city of Ulm (Albert Einstein’s birthplace and site of many other historic/cultural landmarks). Its Benedictine Wiblingen Abbey was founded in 1093 and in the early 18th century expanded into a Baroque masterpiece; the stars here are the over-the-top Rococco church and library (so much for vows of poverty!).