The fourth largest/third smallest of the Canary Islands, Lanzarote is one of its drier, most volcanic-looking ones, wth golden-brown beaches populated by sand blown over from the relatively nearby Sahara desert (the African mainland being around 20 times closer than the Spanish one) and a landscape in places like something from the moon or Mars.

I’m here to explore some of that volcanic landscape in Mount Timanfaya National Park, a half hour west of island capital Arrecife. Relatively compact (51 square kilometres/20 sq. miles), it includes several volcanoes, only one of which is active, the eponymous Timanfaya. At the visitors’ centre, I listen a bit stunned to guide Adolfo López as he ejects a torrent of information about the island and its vulcanism. Extracting a mini torch from his backpack, he points out the three volcanoes we’ll visit in the park. And as he continues, in science made accessible for laypeople like me with references to household-name fizzy drinks, my early confusion melts away.

But first there’s a volcanic simulation to experience. We head down steep steps to the centre’s basement. The light goes out and the room starts to get as steamy as a sauna, with a whiff of sulphur and the bright lights mimicking the famed-and-fearsome eruptions of the 1730s.

And then we’re off, jumping into a 4×4 to see the island’s volcanic terrain at first hand. It’s a dramatic landscape we’ll explore both on four wheels and our own two feet on a small tour (five to ten people each) to minimise impact on the UNESCO-World-Heritage Biosphere which encompasses the entire island. 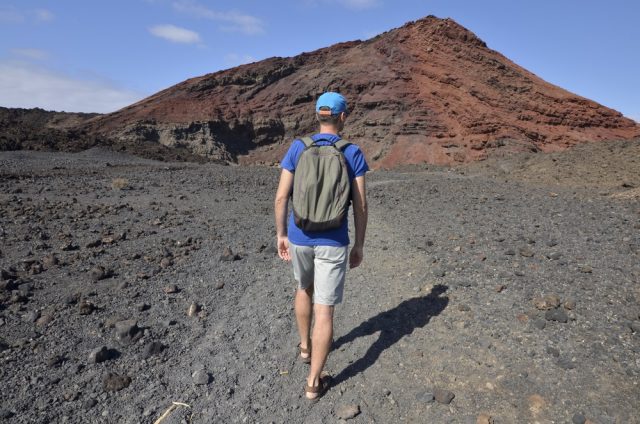 On this five-hour geological tour,  all around us is the malpais, the lava-field badlands which reward the efforts of active travelers – those who know that the best way to explore a new destination is by putting one foot in front of another rather than just remain horizontal on the beach/next to the pool.

First up is a circular tour of the Montaña Colorada (Red Mountain), a name which has also been used to describe the island as a whole, and I’m soon pumped up by guessing correctly that its colour’s due to iron. Whilst this volcano, formed during the major eruptions between 1730 and 1736, catches the eye; even more striking is La Bomba, a round spatter – a type of pyroclastic rock formed by the volcanoes’ projectile spewing of molten lava.

I’ve come dressed in shorts, T-shirt, hiking boots, and a veritable blanket of sun cream. But Alfredo’s trekking gear of hat, jacket, and trousers surprises me. Until I see he’s taken a tip from our north African neighbours, using clothing to protect against the sun and produce a light sweat which will cool you down as a stream trickles around your body.

So I’m starting to feel the heat by the time we arrive at our next volcano: El Cuervo (The Crow), which is certainly as black as the eponymous bird (although these days you’re more likely to spot barbary falcons, which nest nearby).

Fans of classic British sci-fi might recognize the interior of this collapsed volcano, which you can walk into, for it’s where two episodes of Doctor Who were filmed years ago. The acoustics are acclaimed, and legendary musician Brian Eno even played a concert here 16 years ago. 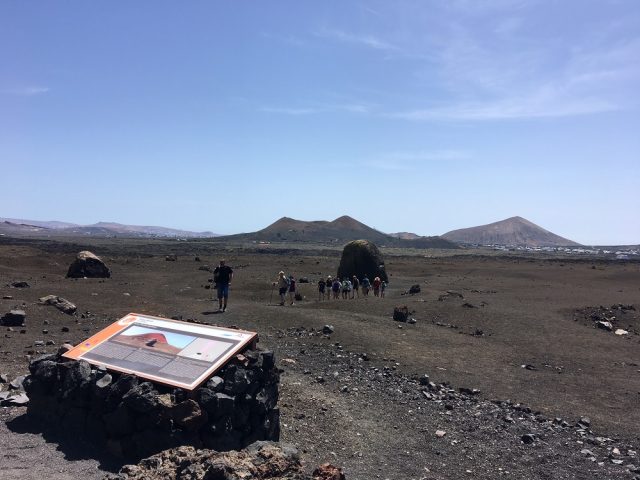 The third and final stop on our tour, a bowl of a volcano called La Rilla, involving some 40 minutes of moderately challenging hiking up to this bowl of a volcano which gave us a great view of it, along with a vista of Lanzarote’s coastline.

As part of our excursion, instead of the usual picnic lunch, we drive to a guachinche-style (a homely, family-run eatery) in the tiny hamlet of Conil, its interior walls decorated like a visitors’ book with black marker-pen comments. As well as Canarian classics such as papas arrugadas (“wrinkled potatoes”), there are house-made red and white wines, crafted from volcanic-soil-grown Malvasia grapes and ranging from quite sweet to rather dry.

A long, lovely lunch is sadly cut short when I have to leave to catch my return flight. Still, there is time for one last stop before the airport, an Italian-style deli in San Bartolomé with a Canarian twist, as everything is prepared with local sweet potato (“todo con batata”), including focaccia and gnocchi (where I was happy to stock up on goodies to take back to my family on Gran Canaria).

It was an invigorating, educating, eye-opening experience, with about seven kilometres (just over 4¼ miles) of easy to moderate walking. You can select from a variety of other tours, as well, including birdwatching, offshore islets, other areas of the island, and more. One thing is certain: you will not run out of memorable experiences on Lanzarote.