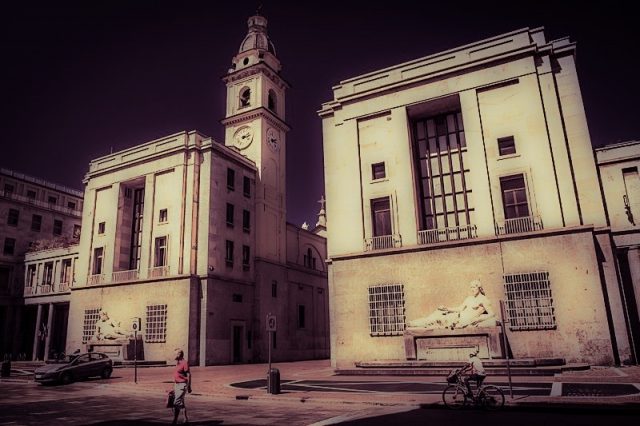 If you’re an aficionado of vintage European films, thrillers, or cheesy horror, you may know the work of director Dario Argento. Now aged 76, especially in the 1970s and 1980s, Argento was a maestro of the macabre, called “the Italian Hitchcock“, an influential virtuoso of stylish Italian mystery/suspense cinema (referred to as giallo because of the traditionally yellow covers of genre pulp novels in Italy). And he chose to set four of his opuses in Turin, the elegant northern city he considered “magical”.

Why might that be? Well, the capital of the Piemonte (Piedmont) region, pop. 2.2 million, was the site of the 2006 Winter Olympics and is known for its cuisine as well as its refined architecture, with major landmarks including main square Piazza Castello; the 17th-century Palazzo Carignano; the 16th-century Palazzo Reale; and the Palazzo Madama, which began as a 14th-century castle, then saw a variety of uses (including the senate of the 19th-century Kingdom of Italy), culminating in its housing today the city’s Museum of Ancient Art.

Furthermore, besides the following films/locations, there’s also another very good reason for film buffs to visit. The skyline’s most distinctive bit is the monumental, late-19th-century Mole Antonelliana, now home to the Museo Nazionale di Cinema, with fascinating exhibits and memorabilia relating not just to Italian cinema from its earliest years but also world cinema.

A blind former journalist (Karl Malden) helps a go-getting reporter (James Franciscus) solve a murder. In one of its key scenes, a car chase in an underground parking lot, was filmed in the diminutive C.L.N. Square (top) in Turin’s historic downtown, right behind the twin churches San Carlo and Santa Cristina on the much grander Piazza San Carlo. Named after the National Liberation Committee, formed late in World War II to oppose the Mussolini dictatorship and Nazi occupation, its main features a pair of neoclassical statues representing Piemonte’s Po and Dora Riparia rivers.

The soundtrack, by the way, was by the great Ennio Morricone, who would go on to score The Mission, spaghetti Westerns such as A Fistful of Dollars, and more recently the likes of The Martian and The Hateful Eight.

This has been praised by critics as the best giallo ever made, though its stars are relatively obscure compared to Malden and Franciscus. The plot revolves around a medium (Macha Meril) and an investigator (David Hemmings) or murders perpetrated by a mysterious character wearing black-leather gloves.

It’s set in Rome, but many scenes were shot here in Turin, starting with a paranormal symposium inside the 17th-century Teatro Carignano (one of Italy’s oldest remaining theatres), whose thick, deep red curtains set the tone for the entire picture. Shortly afterward, the plot takes us to the small Piazza C.L.N., where the investigator witnesses the murder of the medium.

For this one, Argento scouted locations for three months. The Black Forest city of Freiburg is the setting, but filming there wasn’t feasible, so he made do with a splendidly atmospheric, Baroque estate not far from the centre of Turin called the Villa Capriglio. Built in the mid-18th century, by the 1970s it was also abandoned, lending it that splendid air of decay integral to the movie’s atmosphere. Said (naturally!) to be haunted, it’s located on the Traforo di Pino Road, a 15-minute drive or 20-minute train ride from downtown

The director clearly had favourite locations, and 1975 years after Deep Red, and for Insomnio he returned to the velvet and shadows of the Teatro Carignano. Another of note is the Cimitero Monumentale di Torino on Corso Novara. Dating back to the 1820s, the cemetery is the city’s largest, and true to its name is monumental, featuring grand tombs and mausoleums that are works of art. In one scene, you can see the tower of the Mole Antonelliana – appropriately, now home to the national cinema museum.