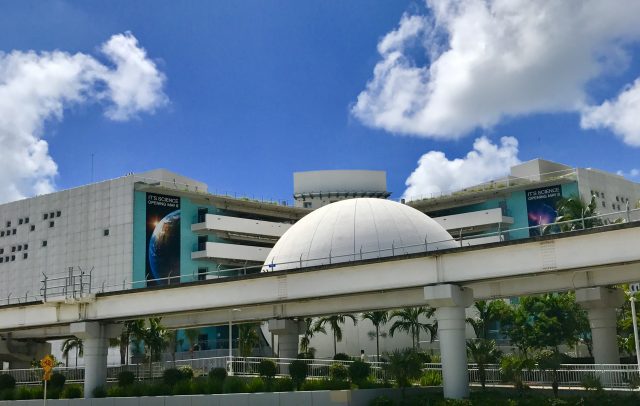 When my husband was just a little fella, he was also a little nerd (an adorable little nerd, it goes without saying!) who was always dragging his folks to the Miami Science Museum in Miami’s Coconut Grove district. And as adults, since moving down here 15 years ago, both he and I visited that museum several times.

So it was with huge excitement and anticipation that we awaited the opening of its successor, transferred to a prime spot in downtown Miami alongside the causeway to Miami Beach, which after much delay and Sturm und Drang finally opened this past May in a prime downtown Miami site right alongside the causeway over to Miami Beach. But our hopes were less than realized on three separate occasions. For all the glitz and hundreds of millions, and despite the fact that there are some parts I really like – even love – it amazingly has in many ways it hasn’t upped its game nearly enough from the old days.

Some of the upsides include the cutting-edge planetarium, with digital tech that produces eyepopping shows (we saw the so-so Asteroids, narrated by Sigourney Weaver, and the much more engaging Dynamic Earth, below, with Liam Neesom). And on the upper floors, the aquarium and other marine and Everglades exhibits are quite cool, too. 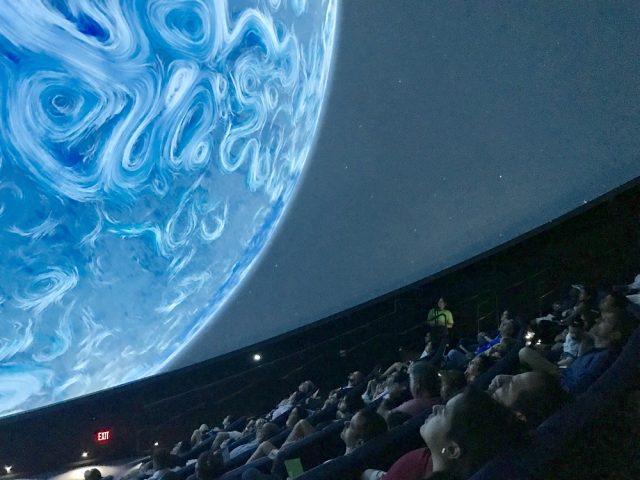 But as for the rest, though the buillding itself is certainly impressive (if not exacty attractive), many of the exhibits are pretty underwhelming. The biology section feels flat and minimally engaging, for example, as does an indoor exhibit on the Everglades and the permanent exhibition on flight. Meanwhile, a huge space was given over to some kind of laser contraption that was boring and slightly baffling. That’s a lotta meh for $200-plus million.

Things improved a bit with the first big temporary exhibition “Space: “An Out-of-Gravity Experience,” which did have some interesting exhibits, and especially of the interactive type (that’s me at left mugging behind a mock-up of a Mars environment suit – just the kind of thing to get imaginations, especially young ones, excited about the idea of travel to the Red Planet).

In addition to its shortcomings per se, I also have a major problem with Miami’s new science museum conceptually. This is a public museum, overwhelmingly financed with our taxpayer dollars. Yet because a tiny fraction of funding was kicked in by Miami’s very own Big Pharma baron Phil “the Pill” Frost (he of the criminally over-the-top Xanadu out on Star Island, one of the gated preserves of the rich and famous in the nearby bay, But for that the SOB nabbed naming rights and even the right to fire the board of directors at one point (a similar hijack was performed by developer Jorge Perez – a prime culprit in making Miami housing so unaffordable for regular people – at the next-door public Miami Art Museum). So I refuse to call this museum by its “official” name, except for once to tag it here: Phillip and Patricia Frost Museum of Science. Another increasingly prevalent example of the one percent hijacking our public space and taxpayer dollars. 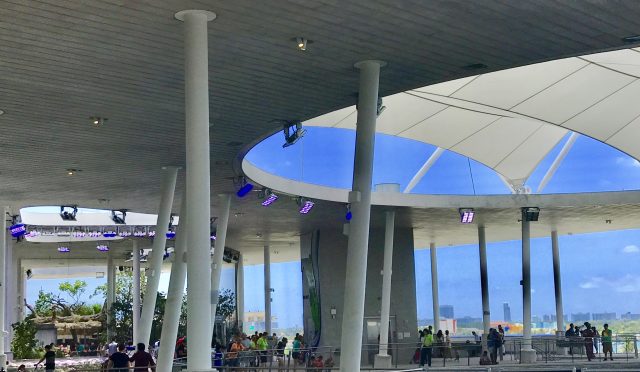 To add considerable insult to injury, this plutocrat is a prominent skeptic of climate change as man made – contrary, of course to the findings of every relevant scientist in the world (I wonder if Phillip Frost has even seen Dynamic Earth in the planetarium here, which does acknowledge the science of climate change as anthropogenic). That the scientists. educators, and public servants involved in this museum sold out to this for a few million dollars is to their enduring shame.

And speaking of money, this museum ain’t exactly cheap to visit, either – $27 pp ($24 for county residents); despite that, the joint was *packed*. I’m just waiting to see if they step up their game on content. 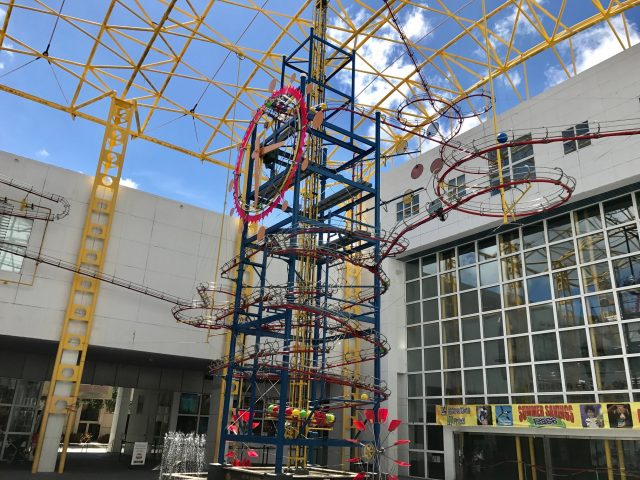 I also can’t help comparing it to Fort Lauderdale’s smaller Museum of Science and Discovery, which is in many ways far more modest, yet in others I feel far more engaging. I took a trip up to Broward County recently to reacquaint myself with this, the most visited museum in Florida, a private nonprofit founded in 1976 and occupying its current digs since 1992.

You enter through a courtyard centered around a huge, entertaining “gravity clock” (above, one of just three of its kind in the world), and proceed quickly to a series of cool displays – many if not most of them interactive. Some involve manipulating phenomena such as light and wind, while others are rides, like the mission to Mars, the Everglades airboat ride, and and airplane simulator. 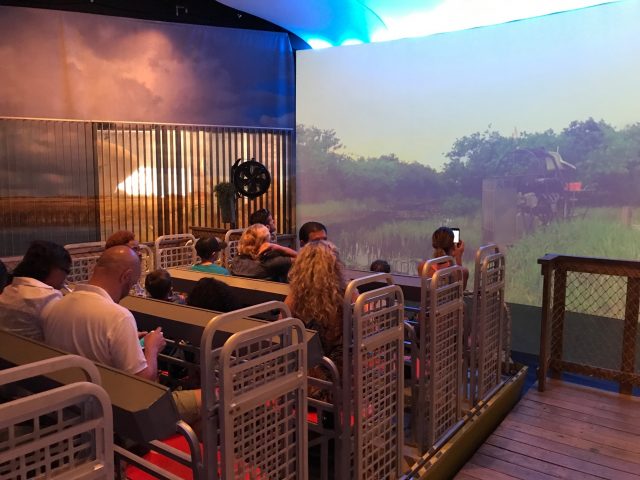 Among the other popular aspects here are the quantity and variety of Floridian animal species on display, letting visitors get quite close to animal life such as otters, baby alligators, turtles, and a sea turtle. There are also demonstrations including those centered on animals. And a discovery center aimed at ages 7 and under is great at keeping the littlest ones engaged (very little of that kind of thing in the Miami museum).

And while there’s no planetarium here, there is a 300-seat 3D IMAX theatre, which screens recent Hollywood releases along with such science-oriented fare as Dream Big 3D: Engineering Our World, Amazon Adventure 3D, and Voyage of Time. 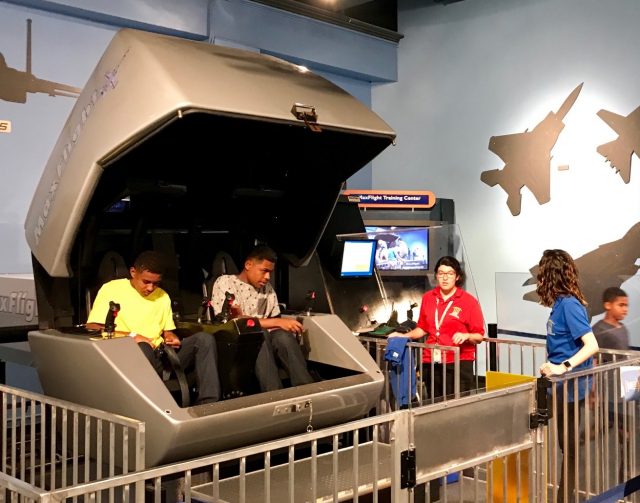 Temporary exhibitions like the current “Birds of Paradise” keep things fresh every season, but permanent exhibitions get renovated and added too. And beyond all that, in the works now is a Florida-oriented EcoDiscovery Center which will effectively double the museum’s public space, and a science theater and new classrooms for additional science programs.

So you might say the Museum of Science and Discovery is an oldie but goodie – and in my estimation possibly a better value for families than the big, overpriced vanity project 45 minutes south. Admission here is $16 for adults, $15 for seniors, an $13 for ages 2-12 as well as U.S. military service members. IMAX admission is $15 for adults, $12 for kids, seniors, and military.