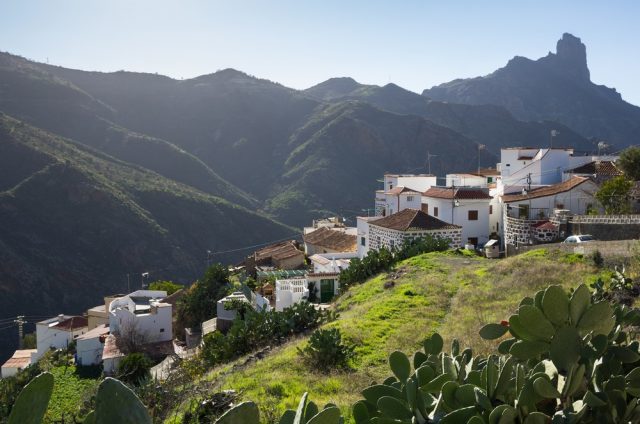 Looking at a map of Gran Canaria (the Canary Islands‘ third largest in size and largest in population), its shape reminds me of a seashell. So you could say that one of its towns which I explored recently, is like a pearl in the middle of that shell. Welcome, my friends, to diminutive, dreamy Tejeda.


There are of course many pretty towns and villages scattered across the Canaries, but nestled in the bosom of an old (and fortunately dead) volcanic caldera, and at the foot of the island’s highest mountain, the 1,949-metre (6,394-foot) Pico de las Nieves, this settlement of just over 2,000 souls is the only one that’s certified, so to speak, as a member of the Association of Spain’s Prettiest Towns. Also framed by two other impressive peaks, Roque Nublo (an iconic symbol of Gran Canaria, below) and Roque Bentayga, this comely collection of white houses and flame-red roofs pueblo is a vision of the tranquility of a bygone era. 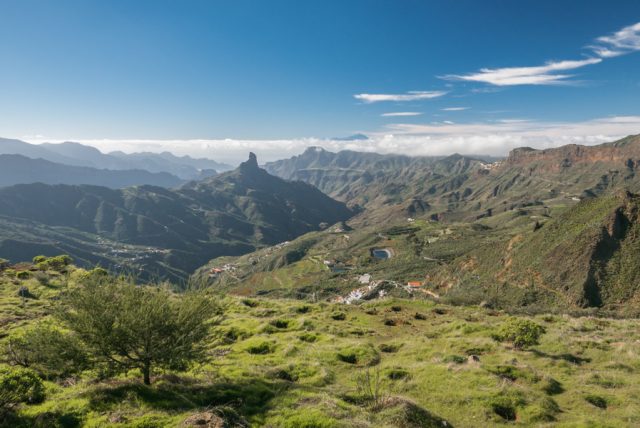 Tejeda is located about an hour’s highly scenic drive inland along winding mountain roads from island capital Las Palmas de Gran Canaria – not counting a stop or two you may want to make along the way, such as the Viera y Clavijo Botanical Garden (Spain’s largest, including 600 plants specifically endemic to these islands), and as you approach the town, the Mirador de Tejeda, an overlook which delivers breaktaking views of the whole valley (and on a clear day, the island of Tenerife, including Spain’s highest peak, majestic Teide). 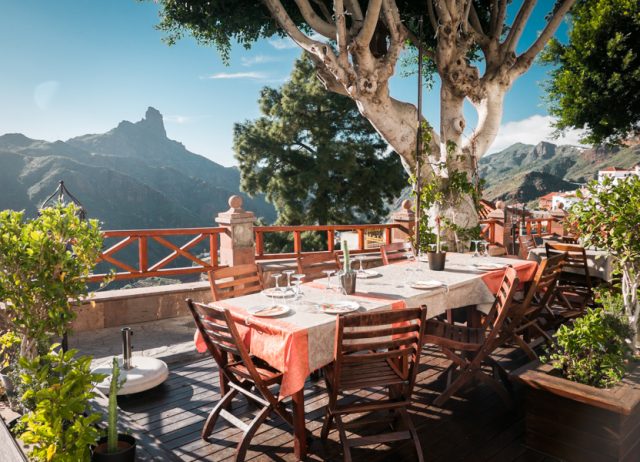 I found that there’s really not much in the way of “sights” in this compact mountain gem, but no matter; the charm of the place is all about strolling its narrow streets, observing, just taking in its easygoing vibe. That, and come lunchtime, having a seat on the terrace of one of its delightful outdoor restaurants (above) and drinking in the lovely views along with some delicious Canarian fare such as “wrinkled” potatoes with spicy sauce and some Flor de Guía mostly sheeps’-milk cheese, paired with a crisp, tart Agala Altitud 1318 white wine.

Then once you’ve done the town proper, in the afternoon drive out to one of the two iconic nearby peaks, Bentayga 15 minutes out of town (including caves and rock etchings by the ancient Guanche peoples, as well as a visitor centre) and Nublo a half hour (plus a 1.5-kilometre hike, just under a mile, from the road if you want to get even closer). Before heading back to La Palma or wherever else you may be staying on island, try to linger a bit to catch the sublime sunset as the great orange orb sinks behind the surrounding peaks.

And by the way, if you can make it here the first week of February, one of the highlights of the year is the Fiesta del Almendro en Flor, when locals celebrate the annual blossoming of the island’s almond trees by dressing up in traditional costumes, performing folk music and dances, and feasting on local delicacies. Tejeda is of course a bit atypical during this particular weekend, when the town’s population is multiplied ten times. But regardless of when you visit, Tejeda will leave you with gorgeous photos and fond memories.