To foodies, tiny Belgium is known foremost for two things: chocolate and beer. And the latter is what’s at centre stage today through Sunday at perhaps the most high-profile of this country’s dozens of annual beer festivals. Sponsored by the Belgian Brewers’ Association, and the Knighthood of the Brewers’ Paddle, along with the municipal/regional governments, the 19th annual Belgian Beer Weekend in capital Brussels fills the Old Town’s splendid Grand’ Place with a celebration of the country’s splendid suds and excellent eats. 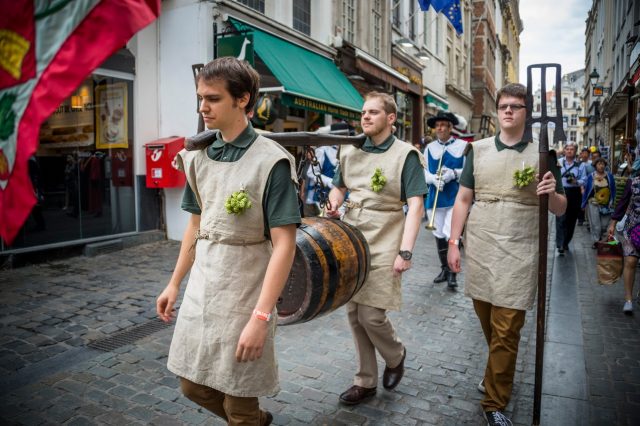 Opening to the public today at 6 to 9:45 pm, then tomorrow and Sunday 11 am to 7:45 pm, dozens of stands will serve up to all comers (who in recent years have numbered over 60,000) their fill of hundreds of kinds of Belgian beer and beer cocktails, and throughout the weekend (including the Trappist-monk-brewed ales such as the famous Chimay, as well as other small to large enterprises – my favourite name at least, being family-owned Brasserie Silly, based in the eponymous village a half hour southwest of Brussels). In addition, there’s live music, and the various brewers’ guilds and fraternities will stage various parades with their archaic finery and historical beer wagons.

And visitors who want to learn more about the country’s brews in addition to beermaking in general, the Beer Museum is steps away, at Grand’ Place 10 (also the site of the brewers’ association headquarters).