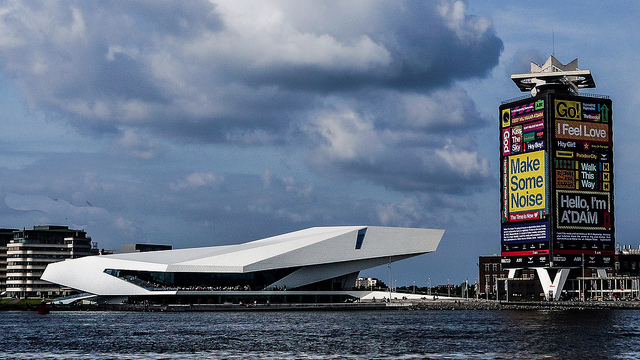 For all its sophistication and urban bustle, Amsterdam remains one of the most welcoming big cities in the world. It’s also one that admirably balances the historic and picturesque with the contemporary and cutting-edge.

And, as they say, a river runs through it. One of the areas where the city’s modernity has been particularly on display in the past decade is along the north banks of its river, the IJ (pronounced “eye”, and spelled that way because in Dutch that combination is taken as a separate letter). When it comes to water, the Venice of the North is of course famous for its quaint canals, but it’s the waterfront that has become an honest-to-goodness hotbed in recent years.

Along the south bank of the IJ is centre city, with all the familiar canals as well as the many sights and museums that have become famous and beloved especially in the past half century. To the north, however, is Amsterdam Noord, a once ignored, down-at-the-heels district which has become gentrified and these days is the city’s go-to destination for cool dining, nightlife, shopping, and culture – all accessible via free ferries that cross the IJ with great frequency. Three top examples:

Built in 1971 originally for Dutch petro-giant Shell and restored in 2016, this 22-storey tower (top right) across the river from Centraal Station offers plenty of pleasures for visitors: a rooftop observation deck; a swing ride that’s Europe’s highest; a revolving resaurant; a hotel; a swingin’ bar; and even a music school for underprivileged kids.  Overhoeksplein 1.

This is a community project that has built its reputation on sustainability, rehabilitating a once polluted shipyard into a complex with offices, a café, a floating bed and breakfast, and various events such as concerts, markets, and food trucks. Korte Papaverweg 2 t/m 6.

Founded in 2013, its architects nominated for the Mies van der Rohe Prize, this eye-catching cinematheque (top left) is a cutting-edge space with cutting-edge screening rooms showing a skillfully curated mix of current and classic. There’s also a restaurant and exhibitions (the current one is on Martin Scorcese). IJpromenade 1.