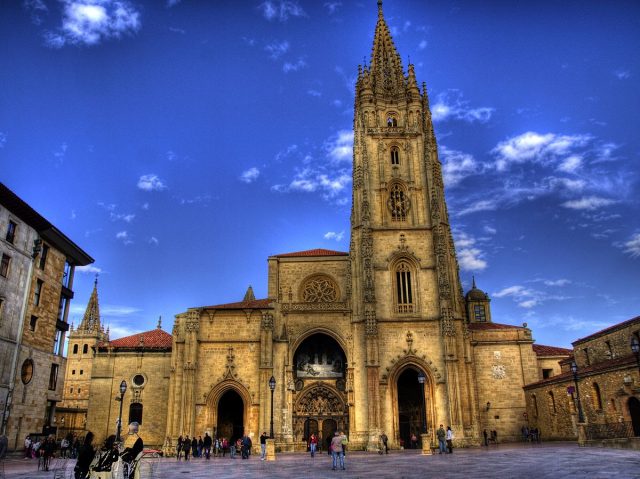 Spain’s green, delightful northern principality of Asturias is known for its bucolic, often spectacular landscapes; scrumptious food and drink (Asturian cider  is especially notable); and quaint small towns. The region’s three larger cities, though, are also definitely worth a visit, and none more so than its capital, Oviedo (Uviéu, in the local dialect Asturianu, similar but not identical to Spanish).

This city of around 221,000 is a true urban gem – an award-winner as one of the country’s cleanest, most liveable, and best-cared for, a city of fountains and appealing architecture from the cutting-edge (such as Santiago Calatrava‘s convention centre) to ancient. Not to mention, by the way, home town of Spain’s current queen, Letizia.

The place to start is along the cobblestone streets of the eminently walkable Casco Antiguo (Old Town), a mix of styles from mediaeval to Belle-Époque. You can still see its original 13th-century walls, but much else from that period was lost in a great fire, and so most of the architecture is from the 16th century onward. Several that have survived from the early Middle Ages include the 9th-century stone also 9th-century San Julián de los Prados has colour frescoes which are among the most important art of its era. Another is the also 9th-century Cámara Santa, a crypt and chapel under the otherwise largely 15th-century Gothic San Salvador Cathedral (top; in echoes of Turin, Italy, this “Holy Chambre” is home to a bloodstained relic called the Shroud of Oviedo, claimed to be the cloth wrapped around the head of Jesus Christ after the crucifixion). The cathedral, also has Romanesque elements, and is notable for its polychrome Flemish altarpiece and lovely cloister.

The main street of the Casco is Calle Cimadevilla, lined with charming shops, pubs, cider pubs, and restaurants, and leading into Plaza de la Constitución with its handsome city hall. A block away from that is another square Plaza 19 Octubre, which is home to the Mercado El Fontán, an Art Nouveau covered market building of cast iron, packed with local foodstuffs and other products; perhaps the real stars among the vendors here are the fishmongers, hawking a variety of painfully fresh catch from the nearby Bay of Biscay.

Other buildings worth a look include the mid-17th-century Casa Consistorial (City Hall), and the original building of the University of Oviedo, established in the early 17th century by the estate of the then head of the Spanish Inquisition; you can pop your head into its handsome arcaded courtyard. The university’s 27,000-plus students are a big part of what makes this city’s streets and nightlife so lively and appealing.

In addition to historic monuments and markets, you’ll also definitely want to set aside a bit of time for a pair of well curated museums. First and foremost, the Museum of Fine Arts housed in the 18th-century Velarde Palace and its modern annex, opened in 2015.  The 78 works here include some of Spain’s top Old Masters and modern artists, including Miquel Barceló, Salvador Dalí, Francisco Goya, El Greco, Joan Miró, Esteban Murillo, Pablo Picasso, José Ribera, Joaquín Sorolla, Antoni Tàpies, and Francisco de Zurbarán. There’s also the Archaeology Museum of Asturias, showcasing the history and ethnology of the region from prehistory through the Middle Ages and housed in the 8th-century Romanesque San Vicente de Oviedo monastery.

Heading out toward the ensanche (19th-century section of the city), a stroll through the leafy park Campo de San Francisco (above) is an atmospheric pleasure (don’t miss the whimsical statue of the beloved Argentine cartoon character Mafalda), as is window shopping and people watching along the main shopping street, Calle Uria. At a certain point on the east side of this street, where it intersects with the pedestrian street Calle Posada Herrera, you’ll spot a distinctive statue of – wait, Woody Allen?? Sure enough – the director’s 2008 film Vicky Cristina Barcelona was partly set here, and the locals were so thrilled they thanked him in bronze. Nearby on Plaza del Carbayón is the handsome, 19th-century Campoamor Theatre, which in addition to a regular cultural programme is also the site of the annual Princess of Asturias Awards, sort of like Spain’s Nobel Prize for the sciences, culture, and sport.

On the north side of the Casco Antiguo, don’t miss a visit to a little downward sloping street called Calle Gasconia. This perhaps more than anywhere else in town encapsulates Oviedo’s lively street life, lined as it is with apple cider pubs serving local specialities but most especially the distinctive pomaceous potions, poured by waiters into glasses from bottles held over their heads. A truly unique experience! 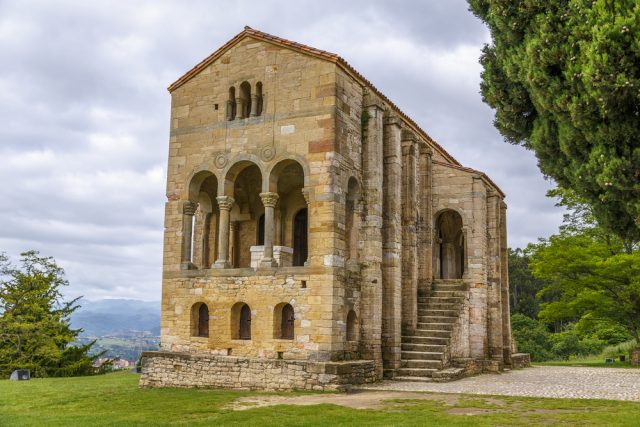 Finally, I’m saving for last what for me is in many ways the best. Above I told you about some remnants of the very early Middle Ages, when Oviedo was capital of the Kingdom of Asturias, the only Christian realm never conquered in the early 8th century by the Muslim emirs and caliphs of North Africa. This kingdom was ruled by the descendants of the Germanic Visigoths who ruled most of Iberia after the Roman Empire did, and up on Naranco Hill, just a 15- to 20-minute drive from the Casco Viejo, are two of the kingdom’s most evocative and complete pre-Romanesque monuments. One is San Miguel de Lillo, a stout, blocky church consecrated in 848, and the other (my favourite) is rectangular Santa Maria del Naranco a short stroll away, built that same year as a two-storey hunting lodge and recreational palace for King Ramiro I, and in the 13th century converted into a church. Exploring the crypt below and an open-sided hall above truly makes you feel like you’re on a set for Game of Thrones!

One final note: Oviedo makes not just a fantastic visit per se, but a great base for exploring the rest of Asturias, being an easy drive to many other fantastic places and experiences including charming seaside towns such as Cudillero, Llanes, and Ribadesella; the dynamic port city of Gijón; Covadonga, a church and grotto which marks the site of the epic 722 battle which launched the 450-year reconquest of Spain from the Muslims; Asturias ecotourism paradises like the Picos de Europa mountains, Muniellos Reserve, and other areas; adventure tourism centred around the towns of Arriondas and Cangas de Onís; agritourism all over the region; and so very much more!

Oviedo is a four-to-five-hour drive from Madrid, and can also be reached by air in just over an hour. More information in English: TurismodeAsturias.es, TurismoOviedo.es.