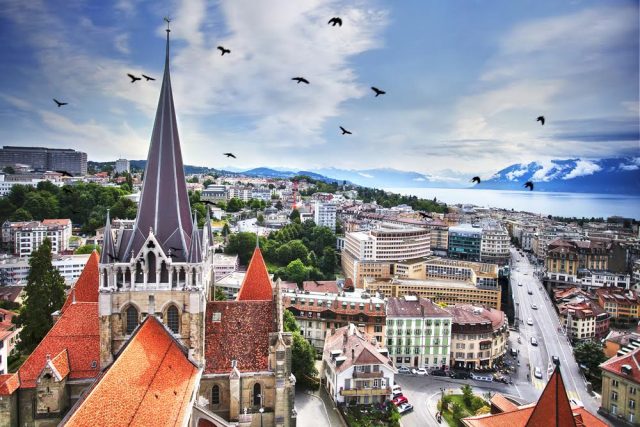 Before visiting Switzerland’s lovely, fourth largest city (pop. 146,000), I didn’t realise that Lausanne was built (beginning in the 5th century AD) on three big hills, and so it features lots of steep streets, narrow staircases and – if you’re lucky – the odd elevator. So I did get several blisters climbing up and down, but it’s worth a bit of pain to discover all the secret corners of this city’s charming Vieille Ville (Old Town), which is only possible on foot.

The best example of urban “mountaineering” here is the colourful Escaliers du Marché (below), a winding, wood stairway dating from the 13th century and connecting the cathedral with the town centre. You can catch a breath on the way up, though, because it’s also lined with quirky cafés and boutiques (the marché – market – alluded to in the name).

Begun in the 12th and 13th centuries, Cathedral of Notre Dame is a great place to start. Check out its unique, 7,000-pipe organ, designed by a former Ferrari engineer, and check the schedule for the many classical and modern concerts performed on it. Another interesting feature here is the night watchman, who every night uninterrupted since 1405 climbs the belltower to shout the hour between 10 pm and 2 am (the current one has been at it for 16 years). And here’s a fun fact: During the Middle Ages, the church was used as a short cut for wagons, and if you look closely at the rosettes in the nave, you will see faint marks of larger arches above the windows where the original opening was to accommodate wagons and horses. A “drive-through” cathedral, so to speak!

Below the cathedral, Flon is a key part of the historic core, once malodorous and packed with mills, tanneries, and warehouses. Beginning in the 1990s, the district was gentrified and is now full of flats, offices, cinemas, boutiques, restaurants, and bars, as well as home to Lausanne’s many year-round festivals.

Other spots very worth exploring in the city centre include the only other remaining medieaval church, late-13th-century St. François, whose otherwise rather bare interior these days hosts a permanent modern art installation which also includes huge, charred ladders and other relics from the great fire of 1368 and the 1538 ravages during the Protestant Reformation.

Follow nearby Rue du Bourg, you’ll find a spot of fashion shopping as well as some of Lausanne’s best chocolatiers, such as Blondel, famous for its truffles and pralines. That street will bring you to the cobblestone Place de la Palud, with its 17th-century Baroque Hôtel de Ville (city hall) – where by the way David Bowie and Iman were married in 1992. Out front there’s a pretty Renaissance fountain with a polychrome statue that’s a very Swiss version of the goddess of Justice, complete with dirndl and golden braids. Across the square is a huge “talking” clock, which every hour on the hour between 9 am and 7 pm sounds a carillon and sends animated figures in traditional costumes marching along, accompanied by a voice telling stories about Lausanne’s history. 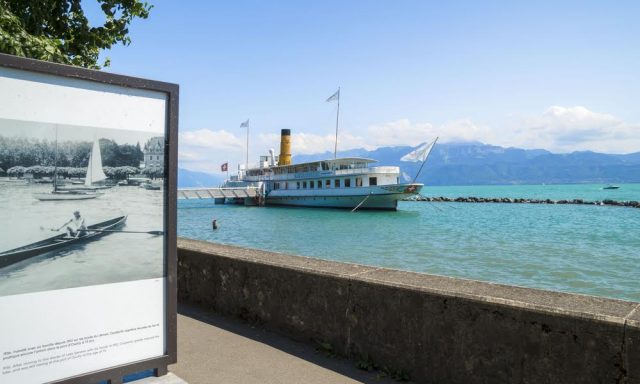 Then it’s time to head for the beautiful district of Ouchy, on the shore of Lake Geneva. Stroll  along the (thankfully flat) promenade past the piers with their lake cruises and ferries to Evian, Vevey, Monteux, and Geneva. You’ll find places to hire pedal boats, or to have a refreshing swim in the clean waters. Nearby, the late-12th-century Château d’Ouchy was once a bishops’ residence and since 1889 has been a luxury hotel.

Another upmarket hotel right next door is Lausanne’s most famous, the Beau-Rivage Palace, an epitome of Belle Époque elegance since 1861, and patronised by the rich and famous (Victor Hugo and Winston Churchill, to name just two). Outside by the lake you’ll see many photographs with scenes from the hotel’s illustrious history. (In the adjacent park, by the way, you’ll find a pet cemetery whose graves include that of the dog of fashion icon Coco Chanel, who’s also buried here in Lausanne.)

By all means do check out the nearby Musée Olympique, appropriately located here because Lausanne is the permanent “capital” of the Olympic Games as the seat of the International Olympic Committee. Its three interactive levels are packed with all manner of fascinating and often cool exhibits about the Olympics stretching back to their ancient Greek origins. You can spend hours playing around with the multimedia exhibits and have a coffee or light bit at the rooftop Tom Café, with a splendid view over the lake. 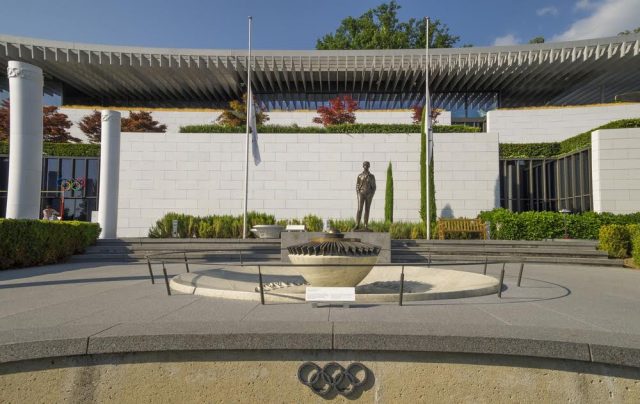 Before leaving Ouchy, top off the day with a sunset cruise on a refurbished paddle steamers which takes you out on a two-hour round-trip to Vevey and Montreux. You can opt for a nice sit-down dinner on the enclosed lower deck or the much livelier alternative of snacks and drinks at the bars on the two upper decks, sitting on lounge chairs or benches, listening to music and watching the stunning panorama of historical vineyards on one side and the Jura mountains on the other glide by whilst the sun is setting.

Speaking of museums, this city features no fewer than 20, the most extraordinary being the Collection de l’Art Brut, a private collection of more than 60,000 artworks done by prison or asylum inmates. A pair of other particularly outstanding example are the Musée de l’Elysée, exclusively dedicated to photography, and the Fondation de l’Hermitage, an elegant lakeside manse with marvelous temporary exhibitions (the current blockbuster, through October, showcases Impressionist masters including Cézanne, Manet, Monet, and Van Gogh).

A brief word about another kind of art, that of cuisine. Many are the fine restaurants here, as you might expect, but a must for traditional French Swiss cuisine – including raclette, fondue, and quiches – is the oldest restaurant in town (est. 1780) Pinte Besson, a petite spot with a charming, very historic feeling and cozy vault-roof dining room.

One great final note: all accommodations provide their guests with a Lausanne Transport Card, which gets you free use of the city’s metro and buses, as well as discounts on the cruise to Evian as well as various museums, shops, and activities. It’s quite a deal, in a city which like the rest of Switzerland can be pricey.

Getting here is a doddle, as well. Lausanne is a 50-minute direct train ride from the nearest airport (and Iberia) gateway, Geneva. So add the Olympic City to your bucket list! You’ll be glad you did.