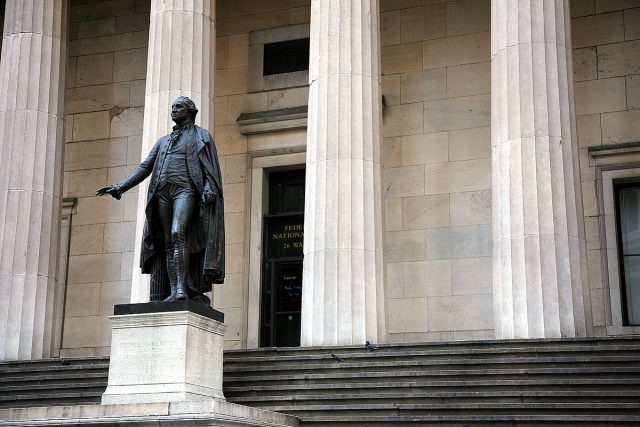 Back before, during, and after the American Revolution (1776-1983) and the years leading up to it, New York City was as now the largest and one of the most important cities of the nascent United States of America – and in fact even served as the independent country’s very first capital, from 1789 to 1790. So it goes without saying that the Big Apple is home to a number of military and political landmarks that were absolutely key to the beginning of this country’s national history. So on the 241st anniversary of its Declaration of Independence, here are a half dozen of the most evocative.

On Manhattan’s downtown Broadway in front of – wait for it – NYC’s City Hall – this petite park was one of the Revolution’s most significant local sites. New Yorkers protested Britain’s Stamp Act here in 1765, and a year later built a “Liberty Pole” to express their desire for independence (a 1921 replica stands nearby). The British forces who occupied New York during the war used the debtors’ prison here to house and execute POW’s – famously including 21-year-old Continental Army spy Nathan Hale (“I regret that I have only one life to lose for my country”), memorialised here by a statue. In 1776, George Washington read the Declaration of Independence to his troops here.

Right on Wall Street In the heart of Manhattan’s Financial District, this neoclassical building with its Greek columns and pediment (top) was once the very linchpin of the new nation. Washington was inaugurated as the first president in 1789 on its steps (his statue stands out front) and Congress sat here; the U.S. Congress met here for the first time (also in 1789, and ratified the Constitution’s Bill of Rights in 1791); and in fact was also the first home of the entire government, including the Executive Branch and Supreme Court. There’s a National Parks visitor centre to elucidate it all for you. 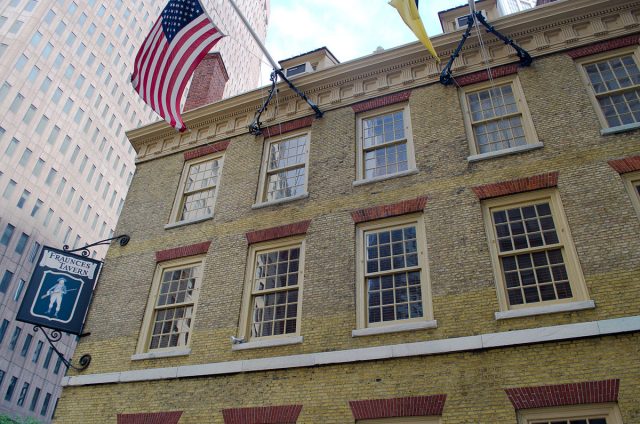 Celebrating its 300th anniversary in 2019, handsome brick building (above) in what’s now also Manhattan’s Financial District is still a tavern/restaurant popular among Wall Streeters. Originally built as an urban manse, in 1765 it was a pivotal meeting place during the tea crisis, and in the 1770s before and during the Revolutionary War was it was a meeting spot for the Sons of Liberty. Once the war was one and British troops left New York City in 1783, George Washington delivered his farewell in 1783 during a victory feast. Expanded over the years to five buildings and eight dining rooms, the colonial atmosphere is still evident today, and there’s a museum of the epoch as well.

Up in Manhattan’s Washington Heights (181st Street Station of subway line A), this park is built around a fort built in 1776 on the borough’s highest hill. It was the scene of one of the worst defeats of the colonies that same year, when 8,000 British troops overwhelmed more than 2,800 American soldiers, killing a few dozen and capturing the rest. The fort itself is gone, but there are a number of memorial markers, and the red lighthouse on the Hudson River (NYC’s only remaining lighthouse, in fact) is a major landmark here, with a autumn festival (this year, the afternoon of October 7) revolving around it. There’s also a Harvest Festival (also in October), as well as occasional Revolutionary War re-enactments. 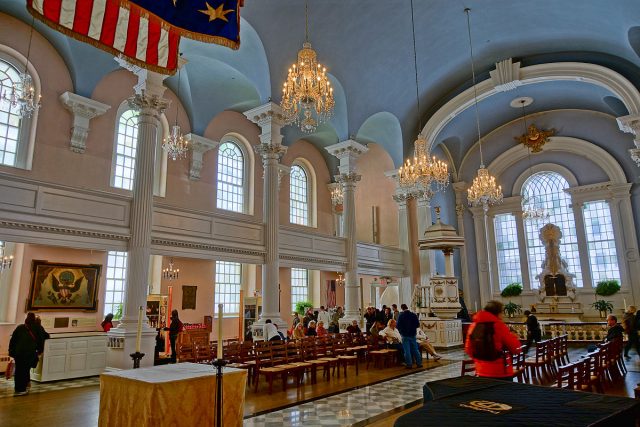 Also uptown in Washington Heights, in Roger Morris Park, Manhattan’s oldest remaining house (1765) is a petite neoclassical Federal-style affair (the result of an 1810 renovation) which was General Washington’s headquarters during the Battle of Harlem Heights in 1776, and then the HQ of the British along with Hessian mercenaries. As president, Washington returned here in 1790 to meet with members of his cabinet. In addition to visiting the interior with its original 19th-century furnishings and décor, there’s always something on here – music performances, art shows, tai chi classes, even a duel re-enactment! (Fun fact: the manse is supposedly haunted, and was the subject of an episode of the Ghost Adventures TV show.)

Down on Broadway in the Financial District, Manhattan’s oldest surviving church (1766) is where Washington attended services on his inauguration day as well as during the subsequent two years NYC was the U.S. capital. During the British wartime occupation, commanders William Howe and Lord Cornwallis also worshipped here. Also NYC’s oldest still functional building, the Episcopal church was renovated in 2016, and its elegant, blue-vaulted interior has a number of Revolutionary period highlights, such as Washington’s original pew; a 1777 monument to fallen General Richard Montgomery (also among the many Revolutionary War figures buried here); and a neo-Baroque altarpiece by Pierre L’Enfant, who designed the new capital Washington, D.C.