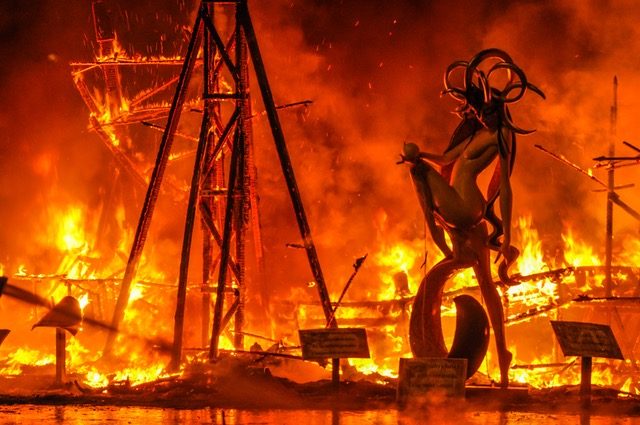 It’s an undeniable trait of the Spanish national character that most everyone loves a festival. You can safely say that approximately every other week (if not every week) there is a festival, feria, or fiesta somewhere in Spain – including copious music, food, drink, fireworks, firecrackers and general merrymaking.

And one of the biggest, colourful, most pyrotechnic of all is held every June in the Valencian Community city of Alicante (this year, June 20-24). Similar to the March falles of Valencia, the Fogueres de Sant Joan (in Valencian; Hogueras de San Juan in Spanish, St. John’s Bonfires in English) may be named for a Catholic saint but goes back way before Christianity, to the celebration of the summer solstice. Bonfires are lighted annually on St. John’s Eve in streets, fields, and on beaches all over Spain to dispel the bad ghosts and negative vibes of the past, to celebrate the end of the harvest and to greet the arrival of the new season.

The festival in its present shape and form dates from only 1928, when a clever businessman founded an association to promote Alicante tourism, and, seeing the commercial success of the falls instigated a vote among alcantinos to elevate the fogueres to a festival of traditional and touristic value.

Attracting tens of thousands of Spaniards and foreigners, the proceedings kick off (this year on June 20), with a literal bang, as masclets (pyrotechnic gewgaws combining fireworks and firecrackers), are set off non-stop until your ears are ringing (if you’re travelling with young children, you may want to leave them at the hotel or risk tears).

At midnight on this day you can watch the plantá, the famous processions of ninots created by fogueriles, the groups which drive the parades and other events. These ninots are enormous, colourful figures and set pieces put together from inflammable materials, which craftsmen spend the entire preceding year to create. Many of their themes are burlesque, making fun of politicians and other public figures, and there’s spirited great competition between the fogueriles. After having been displayed, admired, and judged for four days, the destiny of most these works of art tonight is the pyre (some, though, are saved by committees and popular vote, and retired for displayed in the small but beautiful Museu de Fogueres (more about that below). 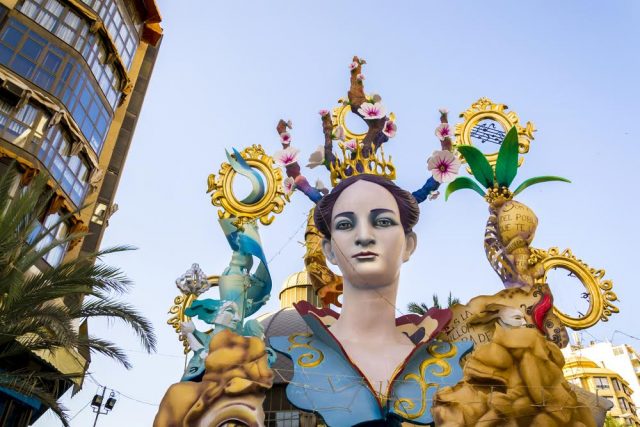 Female beauty also plays a great part in the festivities; each fogueril elects their own “queens”, one a woman and another a girl, wearing traditional costumes. Two days are dedicated to flower offering to the Virgin del Remedio, Catholic patroness of Alicante, and it’s one of the responsibilities of the queens to bring flowers to the cathedral and offer them to the Madonna.

More costumes, folklore, and music follow on the 23rd, as folklore groups in 18th-century Alicante costumes parade through the city, accompanied by musicians and interspersed with more parades of the ninots. Masclets, too – although of course not so many as not to drown out the music.

The highlight comes today, the 24th, when at midnight, an enormous firework display is launched from the highest point of Monte Benacantil  with the imposing Santa Barbara Castle looming above city and port. The display is of white lights only which form a huge palm leaf. And then it’s time for the cremà, the huge street bonfires in which the ninots are cremated. The biggest is in in Plaça de l’Ajuntament (City Hall Square), but others are spread throughout centre city as well – meaning the whole place is really going wild with noise and fire for a good several hours. To keep things from getting out of hand, the burning of the ninots is followed by the banyá, when city firemen douse the remaining flames – and yes, to a good extent plenty of spectators too, which is all part of the fun.

During these four days and nights, eating, drinking, drinking, and little sleep are all part of the show, and you really get to rub shoulders with the locals. Paellas, pinchos (meat skewers), and the great wines of the region will keep you going. Great fun is had by all

Should you miss the fogueres de Sant Joan themselves, you can still get a good sense of the whole thing at the central Museu de Fogueres, a small, pink building at Rambla Méndez Nuñes 29, which is easy to find. Here you can actually get a much better look at the great art of the ninots than by watching the street processions. Ninot craftsmen also display their work before the festival at the Llotja de Peix exhibition hall (Avinguda Conde de Vallellano 18), where you can see how they’re assembled.

The upper floor explains in detail the history of the fogueres of Alicante, exhibits posters of past festivals, portraits of the ‘queens’ and many other interesting details. Admission is free, you can take as many photos as you like, and as fireworks and mesclets are absent, feel free to bring the little ones!