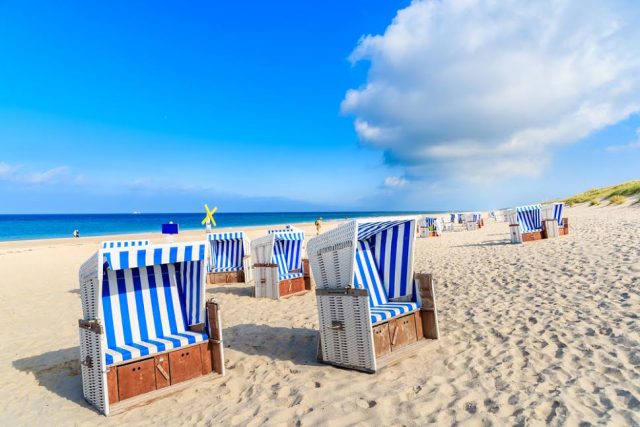 When thinking Europe beach holidays, Germany is quite likely far down or even off the list of countries that spring to mind. But as its North Sea coast warms up, its East Frisian and North Frisian Islands (21 of which are inhabited, and all of which are little known outside the country) become quite the sunsplashed beach, eco, and spa meccas. A few of them allow cars, while others do not, and many more are small, uninhabited islets that form part of Wadden Sea National Parks in three states, a UNESCO World Heritage Site. The nearest airport for all is Hamburg, about 2½ hours away.

Here’s an overview of Friesland’s seven most popular islands: 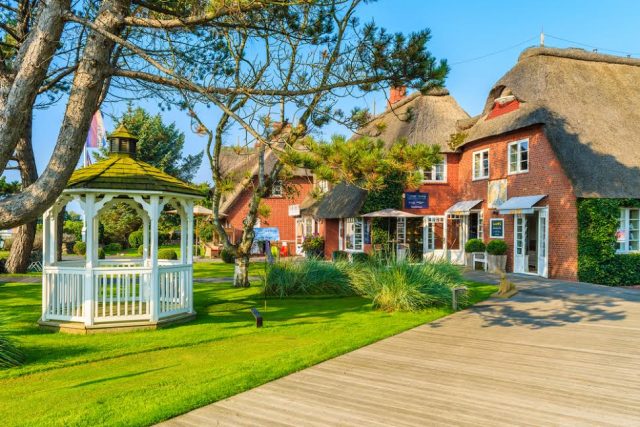 In the North Frisians, the largest (99 square km/38 sq. mi.) as well as priciest of all the islands was first transformed around a century ago from a modest fishing and farming village to coveted spa and holiday destination for well-heeled Germans, enticed by a lovely, sandy, 40-kilometre (25-mile) sand (top) a stimulating climate of salt-saturated air beneficial for asthmatics. And along with it came fancy resorts, dining, nightlife, and other amenities.

Over the generations, many bought second homes in the form of one of the traditional thatch-roof cottages (top) or flats in huge blocks which shot up like mushrooms. As a result, many islanders were even forced to move to the mainland due to high rents and prices.

So yes, these days it’s a bit on the pricey side, but delivers with a nature paradise combined with a good helping of glamour. Fortunately, much has been done to preserved the vast heather flats in the middle of the island, home to countless species of rare birds and butterflies, as well as guided walking tours right onto the Wadden Sea bed when the tide is out (many start in the villages of Keitum and Hoernum).

Besides those two villages, others include Westerland (whose outstanding attractions include a huge seawater pool and spa an aquarium, and four golf courses), Kampen (site of a nude beach at Bune 16! ;)) and Wenningstedt (golfers will be happy to find a fine 18-hole course and history buffs will love the Denghoog, a 5,000-year-old Neolithic burial chamber made up of 12 massive stone slabs).

Although the heyday of the major celebrities here such as Brigitte Bardot are long gone, there are still enough beautiful people for eye candy as you party the night away in clubs like Strand Oase, Sturmhaube, Club Rotes Cliff, and the legendary Pony. Sleep it all off the next day in one of beaches’ 10,000 emblematic rattan beach chairs called Strandkörben (top).

Sylt is the only one of these islands which can be reached by car, and only on a 30-minute car train across the causeway connecting the town of Niebuell (a 2½-hour drive from Hamburg along the B5 and A23) to Westerland. 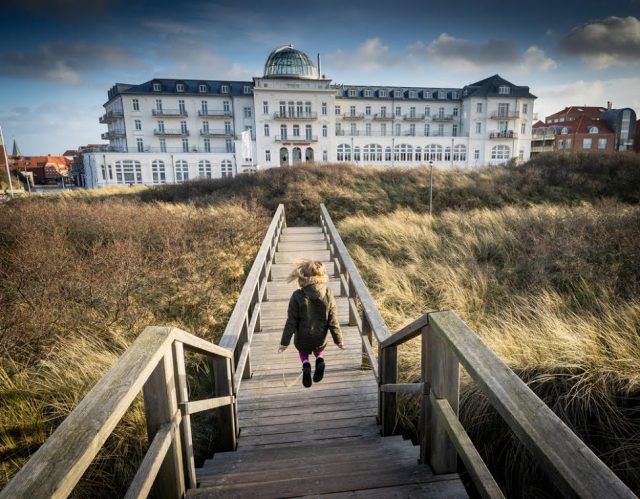 Off Lower Saxony, the East Frisian islands are smaller and more laid back. With a length of 17 km (11 mi.), family-friendly Juist is the longest, with no cars and no camping (you get around on foot, by bicycle or, more stylishly, in horse-drawn carriages). Highlights include the partly-grass-covered sand dunes, up to 22 m (72 ft.) high, and the beaches, again like Sylt, covered with those distinctive Strandkörben beach chairs. Its beginnings as a spa are reflected in Strandhotel Kurhouse Juist (above, aka the “White Castle by the Sea”), an Art Deco grande dame where the guests used to ‘take the waters’.

Right in the middle lies the islands’ only freshwater lake, the Hammersee, a paradise for birdwatching, and in an area called Bill you can have a look at a huge seal colony.  Other attractons include a huge pool and the whimsically named Doornkaatbuddle, a water tower which is the island’s oldest landmark (built in 1928 on the island’s highest dune). You’ll see why locals dub their charming home Töwerland – “magic land” in local dialect.

Juist can be reached by ferry from Norddeich Mole or via direct flight from Hamburg (easier, because the ferry depends on the tides). 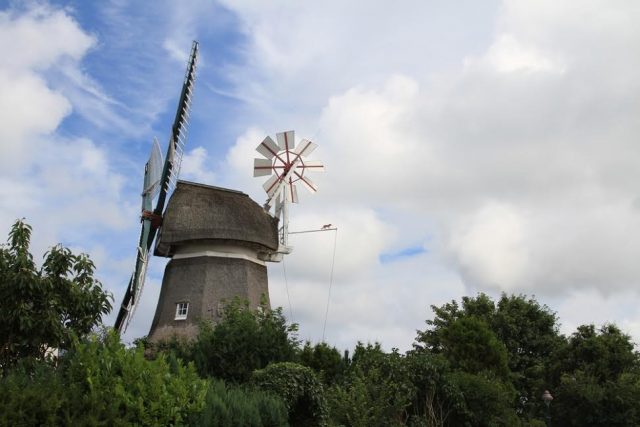 Both the 14-km-long (nine-mile) island and its town of the same name are home to Friesland’s oldest spa, the Königlich Preussische Seebadeanstalt (Royal Prussian Water Park), built in 1797, which was extremely popular with 19th-century royalty and aristocracy such who established their summer residences here. The tradition lives on in various installations offering thalasso (seawater) therapy and other spa treatments.

Cars are allowed on this tranquil island, but their use is restricted. Apart from spas, there are five sandy beaches, a seawater pool, riding paths, and plenty of hiking, biking, and birding opportunities (95 species breed here). Have a look at Selden Rüst, Lower Saxony’s only windmill (above), the lighthouse, and the Heimatmuseum (with exhibitions on the island’s life, times, and customs in decades and centuries past). Architecture buffs will enjoy the center of Norderney town, dominated by Art Deco buildings and the elegant high street, Kaiserstrasse. There are just two highrises with mostly holiday apartments have been built, but several four-star hotels also await visitors.

You bring your car by ferry from the town of Norddeich Mole. Norderney also has an airport with flights from Hamburg. 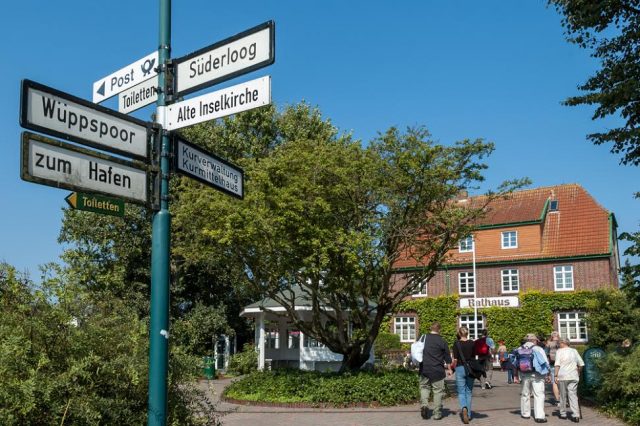 No aristocratic past (although in recent years several German presidents have holidayed on Spiekeroog), no party nights – go local and low-key on the three little sisters of Juist and Norderney. Cars are verboten on all three, and there’s no airport on Wangerooge. All are accessible by ferry, and not having a car is not biggie; you get around on foot or by bike, and Langeoog and Wangrooge also have vintage narrow-gauge trains.

Apart from long, lovely beaches and outsdoorsy activities on all three, the easternmost island, Wangerooge, also features thalasso spas; a modern and a vintage lighthouse; the Western Tower built in 1597. Langeoog highlights include a huge beech forest, a large silver seagull colony, and a maritime museum with large aquarium. Spiekeroog (above) boasts some of the islands’ oldest buildings; the Altes Inselhaus (Old Island House) dates from 1705 and is today a café and restaurant, while the Alte Inselkirchen (Old Island Church) was built in 1696 and boasts a Virgin Mary portrait supposedly from a stranded ship of the Spanish Armada. You’ll also find smaller-scale thalasso treatments, seawater pools, and other holiday amenities.

All are family-friendly and Wangeroog especially loves dogs; hotels and bed and breakfasts allow them and the island even has a special dog beach. Speaking of which, the properties on these islands tend to be smaller as well, but I highly recommend opting for one of the many bed and breakfasts in traditional thatched houses, with low ceilings and vast kitchens.

Finally, whichever island you end up on, be sure to try local Frisian cuisine specialities such as Rullfleesk, a long, rolled up slice of beef filled with bacon, mustard and pickled cucumber; Snirtjebraten, roast pork or beef shoulder served with vegetables and lavishly covered with gravy; and Räuchermakrele, smoked mackerel.

I also recommend having fun with crab shelling – you buy paper bags full of fresh, rather tiny crabs, then sit down and shell them, from fingers straight to mouth. The favourite locbeverage – and indeed, in all of Friesland – is tea (“Frisian tea culture” is actually a thing up here). Frisian tea is very strong and black, and drunk either with Kandis, a huge lump of crystal sugar and a dollop of cream, or a generous slug of potent local rum.

More info on these and other North Sea islands: Germany.travel; best fares to Hamburg from the USA, from Spain.

Inka Piegsa-Quischotte is an attorney turned travel writer/photographer, currently living in Alicante, Spain, whose work has appeared at GoNomad, GoWorldTravel, EuropeupClose, and BBC Travel. Her blog GlamourGrannyTravels.com is dedicated to female baby boomers who love to travel in style and comfort.