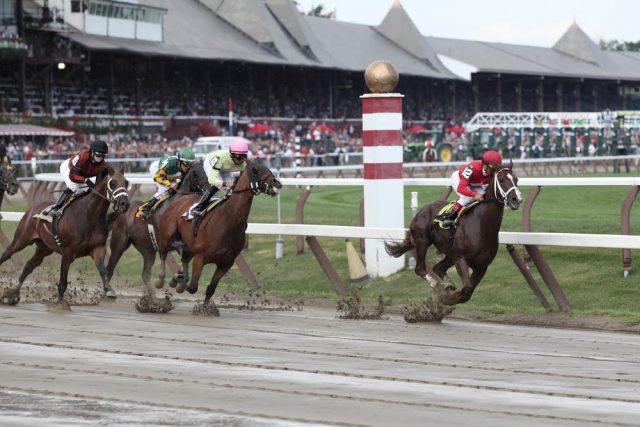 As the chap at the piano in the straw boater and seersucker suit jauntily belts out this equine ditty from the classic musical Guys and Dolls, he sure knows his audience well. The guys and dolls sipping champagne and nibbling shrimp cocktails and filet mignon at Siro’s, a classic local restaurant and watering hole right next to one of the USA’s most famous racecourses, are part of a summer scene that has dates back to the era following the U.S. Civil War, following the 1863 opening of the Saratoga Race Course to join the existing mineral-springs spa resorts to make this upstate New York town one of the country’s earliest holiday destinations.

Just over three hours’ drive from Boston and just over four from New York City, this delightful small city (pop. around 27,000) is for my money one of the most appealing in all of New York State. Quite apart from the summer season centring around “the Track”, the utterly charming, 19th-century Victorian architecture, combined with generous dollops of fascinating historic sites, compelling cultural offerings, and sophisticated shopping and dining make Saratoga Springs this state’s most engaging and multi-faceted magnet outside of NYC.

Starting at the very beginning, Fort Saratoga – named after the Algonquin Indian name for the area – was founded here in 1691, and a town around 1776. The Battle of Saratoga, fought 24 kilometres (15 miles) to the southeast in 1777, was a turning point of the U.S. Revolutionary War, and today you can visit the Saratoga National Historic Park, which also includes the nearby site of the British encampment during that fateful engagement.

Of course, it’s not history that draws most visitors up here, but rather the Track and the adjoining harness racing track, which start running races in June but whose peak season is July 21 through September 4. The historic grounds are a delight to wander, and the excitement is palpable, even if you don’t bet on the ponies (I’ll never forget how pumped I was as a youngster when I won $112 on a $2 bet – but I quit while I was ahead!). There are also several dining venues from informal to upmarket; a 45-minute walking tour available for just $3 ($10 for a family); and for those so inclined, a Las Vegas-style casino with electronic slot machines and table games.

Related to all this, the National Museum of Racing and Hall of Fame is just across the street, and another fascinating experience is a visit to the thoroughbred aucitions at the nearby Fasig-Tipton pavillion, held during the first half of August and in mid-October.

The city’s other historic draw of course comes from the very springs in its name, and most of the action is centred around the elegant Saratoga Spa State Park (above) a lovely spread of lawns and forestland laced with streams and studded with recreational facilities (such as the 19th-century Historic Victoria Pool) and of course spouting springs from which you can have a taste of the famous waters (an acquired taste, for sure – what with that classic rotten-eggs aroma and sulphurous flavour). You can take a quite interesting guided tour of the grounds, and for baths and treatments, you’ll want to book at the Roosevelt Baths at the historic Gideon Putnam Hotel. 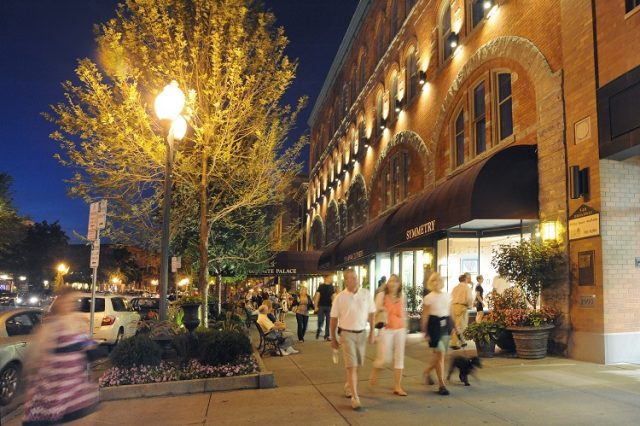 Quite apart from all that, I just love Saratoga’s late 19th-century downtown, centred along Broadway, with some really cool independent boutiques (including not one but two fancy hat shops!) and historic hotels. And plenty of eating and drinking, of course. Caroline Street is especially thick with watering holes, and in addition to classic restaurants like Sperry’s and pubs such as The Parting Glass, there are microbreweries and a bevy of other eateries, ranging from modest pizza joints and sandwich shops to world cuisines and cutting-edge contemporary. At downtown’s southern edge, Congress Park is wonderful for a ramble, with a duck pond; a vintage carousel; a couple of fountains spouting the famous spring waters; and the Saratoga Springs History Museum, ensconced in the handsome 1870s Canfield Casino.

Speaking of which, a handful of other museums well worth a visit here, depending on your interests, include the Saratoga Automobile Museum, the National Museum of Dance and Hall of Fame, and the New York State Military Museum, housed in a red-brick onetime armoury.

Performing arts also loom large in the Spa Little Theatre, as well as June through September as locals and visitors alike also flock in summer to SPAC (the nonprofit Saratoga Performing Arts Center) in Spa Park, with paid seating and free lawn seats for a diverse range of programming, especially ballet and symphonic (it’s the summer home of both the New York City Ballet and the Philadelphia Orchestra) but also including opera, musicals, jazz, modern dance, and pop (this summer, Dave Matthews, Sting, Goo Goo Dolls, and Nickelback are among the boldface names putting in appearances).

And by the way, despite plenty of well-heeled visitors and residents, it’s worth noting that downtown is also quite young-feeling, thanks especially to the presence of 114-year-old Skidmore College, which also presents a panoply of art, music, and stage events at its art gallery, Bernhardt Theatre and other venues (one its star performers this summer is Jon Baptiste and Stay Human, best known as the house band for The Late Show with Stephen Colbert).

Finally, while you’re here, it’s definitely worth the half-hour drive up to Lake George and its eponymous, also attractive and historic town. The lake is a huge and delightful affair where you can lie on a beach and cruise by boat (including an authentic old-timey paddlewheeler). A littler farther north still, at the southern tip of Lake Champlain, is another emblematic site of the American Revolution, Fort Ticonderoga (which was actually built by the French in the 1750s, during the colonial-era French and Indian Wars.