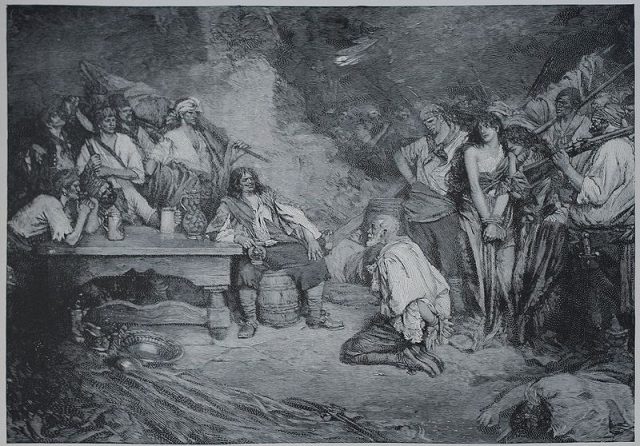 Howard Pyle/Buccaneers and Marooners of the Spanish Main”, Harper’s Magazine

In the fifth film of the Pirates of the Caribbean franchise, Dead Men Tell No Tales (aka Salazar’s Revenge), the eponymous evil and undead Spanish navy captain Armando Salázar (played by Gran-Canaria-born star Javier Bardem), leading a crew of similarly ghostly sailors plays a central role, and one with roots in authentic history (even if these particular movie locations were all in Australia this time around).

From the early 17th century through the 1830s (a goodly chunk of the reign of European empires in the Americas), Spain’s navy, shipping, and colonial settlements in what was known as the Spanish Main became the targets of pirates, privateers (pirates authorised by governments), corsairs, and bucaneers from France and later also England and the Netherlands. Bucaneer strongholds included Port Royal at the mouth of Jamaica’s Kingston Harbour; Tortuga Island off Haiti’s north coast; and the capital of today’s Bahamas, Nassau (at that time dubbed “the pirate republic”). And quite a few Iberia destinations have had their histories shaped by these actual pirates of the Caribbean. Here are a half dozen of the Spanish Main ones, me hearties… 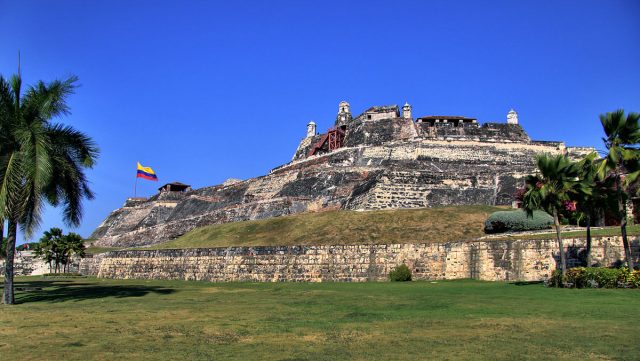 Founded in 1533, Cartagena de Indias was assaulted various times, including early on in 1551 when French pirate Robert Baal forced the local governor to flee but withdrew after being paid off in gold and silver, followed by another Frenchman, Martin Cote, in 1560, then the reknowned Sir Francis Drake in 1572. To defend against such depradations, the massive, still visitable San Felipe de Barajas Fortress (with no vertical walls and plenty of secret passageways) was built beginning in 1536; the smaller San Sebastián del Pastelillo in the mid-18th century (now part of the local Club de Pesca, Fishing Club); and the cannon- and turret-studded old town city walls, constructed over the course of centuries beginning after Drake in the 1570s and up to six metres (20 feet) thick. Cartagena’s Palace of the Inquisition Museum also houses artifacts, documents, and maps relating to piracy against the city.

One of the country’s oldest cities (and now its second largest), Santiago was also set upon numerous times, especially during the quarter century after 1538, by the likes of Jacques de Sores (aka “the Exterminating Angel”) and François Le Clerc (Jambe de Bois – Pegleg). Its 17th-century Morro Castle (below), is today home to a museum of piracy.

Havana, too, was victimised aplenty, for example by an unnamed French pirate whose forces went on a rampage here in 1527, and again in 1555 by de Sores after his fun with Santiago. As a result, various fortifications were built which can be visited today, including the fortresses of El Morro (1589) and La Cabaña (completed in 1774) across the harbour from Old Havana, and the much smaller Castillo de la Real Fuerza right in the old town which preceded them (completed in the 1570s, it now houses a naval museum which includes displays on defenses against piracy). So by 1668, when one of the most famous and successful privateers of the era, Henry Morgan, hoped to raid Havana, he found it too well defended and so settled for hitting inland Puerto Príncipe (now Camagüey), though the booty was apparently a disappointment.  (Final fun fact: one of Cuba’s contemporary beer brands is Bucanero, Buccaneer!) 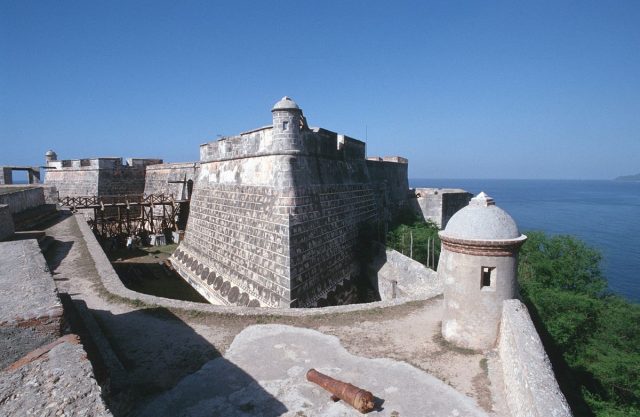 The DR’s capital (and the Caribbean’s oldest city) Santo Domingo was plundered and burned by Pegleg Le Clerc in 1553 and Drake in 1586. The defensive wall and bastions surrounding the lovely colonial old town; modest San Gil Fort, and Ozama Fortress, all erected in the early 16th century (all still visitable today), didn’t seem to do all that much to keep out marauders, perhaps partly because the harbour is configured in such a way that was particularly difficult to defend. And in any case, most of the economic and political mojo of the overseas empire shifted toward Mexico as the 16th century advanced, so military and piratical raiders found less here to interest them anyway.

On the more ersatz side, by the way, out east in the Punta Cana/Bávaro resort area there’s a cheesy but fun pirate tour on the “pirate ship” Hispaniola (though I’m pretty sure the rogues back in the day did not include snorkelling as a ship amenity J).

As the site of the mainland USA’s oldest European settlement, St. Augustine, founded by the Spaniards in 1565, the city and the surrounding northern Atlantic coast of Florida were a magnet for pirates for generations. The ubiquitous Drake burned the town down in 1586, and another famous sacking occurred at the hands of Jamaica-based Robert Searle in 1668. The impressive San Marcos Fortress became an important part of the region’s defense, even though it came along somewhat later, in the 1760s. And one of the world’s best pirate museums, Pirate Soul, is based here.

Elsewhere in the state, the Florida Keys were because of their tangle of mangrove-lined tangle of islands and islets a perfect hideout for pirates such as the escaped African slave Black Caesar.  Up on the Gulf of Mexico’s Florida Panhandle, the city of Pensacola grew from Spanish forts founded in 1698, which helped protect against pirate deparadations among other things; you can still visit its impressive Fort Barrancas. 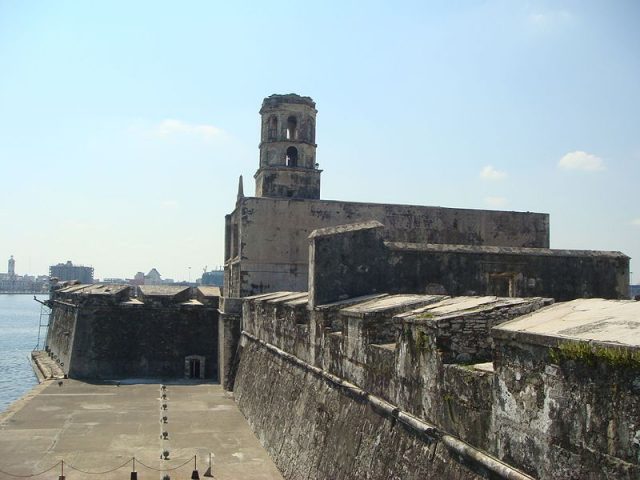 The main port of the Viceroyalty of New Spain was Veracruz, on its lower Gulf of Mexico coast, founded by the conquistador Hernán Cortes in 1519. As a major transatlantic departure point for Spanish treasure fleets and site of the empire’s colonial mint, this sultry port became at some points even wealthier than Mexico City – and so naturally attracted plenty of pirate luv over the centuries from the likes of Drake (of course) and John Hawkins, whose five-ship attack in 1568 ended in disaster for them. More than a century later, 1683, another famous joint attack under Dutchmen Laurens de Graaf and Nicholas van Hoorn along with Frenchman Michel de Grammont, left the city in ruins. Veracruz’ main defense was Castillo de San Juan de Ulúa (above), a good-size complex of fortresses, prisons and one former palace on an island overlooking the seaport, built in 1518, enlarged various times over the years, and still open to visitors today.

Back in those days, Panama was part of Colombia, and one of the most famous privateers of the era, the dreaded “Morgan the Terrible” in 1670 famously burnt Panama City to the ground, its residents murdered or forced to flee. This was a huge blow to Spanish power and pride in the Caribbean, and Morgan became a hero back in England, awarded a noble title and the lieutenant governership of Jamaica (and eventually even had a brand of spiced rum named for him!).

Another key site is the historic town of Portobelo, on the Caribbean coast about an hour’s drive up from the city of Colón. The bay was visited and named by Christopher Columbus, and in the 16th century a bustling port developed – one that was ransomed and/or sacked by Drake and Morgan (the latter considered a victory so famous it gave its name to London’s Portobello Road) and where you can visit several imposing fortresses built to fend off further attacks.

French corsairs such as Pegleg Le Clerc preyed on the island throughout the 16th century, with one particularly notable sacking of the historic port of San Germán in 1528. San Juan’s impressive San Felipe del Morro fortress (above) was built in the 1550s to help protect against them, fending off among other things an attack by Drake in 1559. In 1625, though, Dutchman Hendrijk Boudewijn’s crew did manage to sack the city. Nearly two centuries later, a homegrown, late-in-the-game swashbuckler was Roberto Cofresí, better known as el pirata Cofresí, who in 1818-25 attacked mostly United States shipping but was eventually captured and went before a firing squad in San Juan. (there’s a statue of him in his native town Cabo Rojo, and his fame was kept alive elsewhere in the Caribbean, too, such as a town named for him on the Dominican Republic’s north coast near Puerto Plata).

So avast and have at it!

This is the first in an occasional series of Love2Fly posts talking about key aspects of Spain’s ’s long and complex history, to provide at least a bit of context for our travel, food, and culture posts, as well as simply to help our non-Spanish passengers and friends learn more about our fascinating country. Next up: the ancient kingdoms that evolved into today’s Spain.