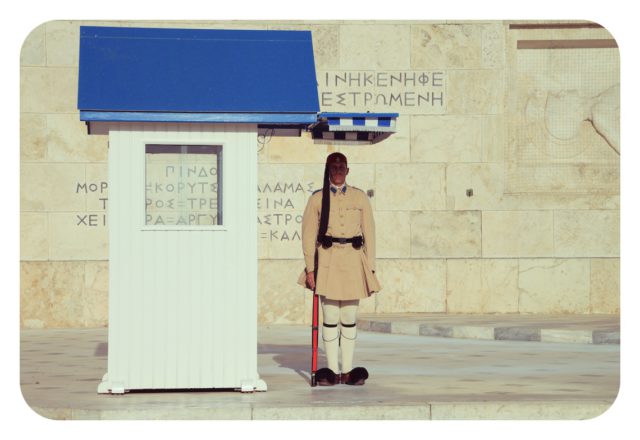 Greece‘s capital is like a box of assorted biscuits. It’s exciting to take the lid off, and you can spend hours and days rummaging through the attractive variety of reasons for devouring them down to the last crumb. Like the Parthenon, some are irresistible classic flavours, but there are other less obvious and highly creative ones. Let’s tuck in to 24 hours in the most contemporary side of Athens together and fill us up with so much art, design, and cuisine.

We’ll spend the morning in Athens between mouthfuls of art and design.

My recommendation of the day is the Benaki Museum (Koumpari 1) a wealthy man’s whim in the form of such a solidly built construction meant to pay homage to his father. The museum houses collections of all kinds of art imaginable – and also some I never imagined. Open on Monday, and admission is free of charge on Thursdays. In addition, the cafeteria in the main building has a terrace with views of the Acropolis.

As for art exhibitions and festivals for 2017, a new event on the schedule has to do with Documenta Kassel, the most groundbreaking and important art show on the planet will hold its 14th edition in Kassel, Germany from June to September this year, and has decided to split itself into two by holding its first edition in Athens. Those keen on art and cool ambiance will see the Greek capital during the bloom of its creativity, as we will walk round Athens during the mornings of April and June, and with a smile on our faces. We will be making history: for the first time in 60 years, the lighthouse that lights up the global artistic calendar every five years will be sharing its site and cultural wealth.

We’ll spend the afternoon taking avant-garde bites out of the city.

Before sinking your teeth into one of the most visited museums on the planet, I suggest paying homago to Hestia – the Greek goddess of cuisine, by looking for interesting restaurants near the Acropolis Museum (Dionysiou Areopagitou 15). A great and convenient option is the Kalamaki Bar (Dimitrakopoulou & Drakou 15), with excellent service, good prices, and tasty Greek delicacies such as souvlaki.

More big news: In 2017, it will be 1900 years since the Roman emperor Hadrian, ascended to the throne, which is why the Acropolis Museum is making the most of the event to pay tribute to the emperor.

Since the reopening of the Acropolis Museum in 2009, it has become one of the most innovative art centres in the world, and the new building is pure avant-garde architecture. 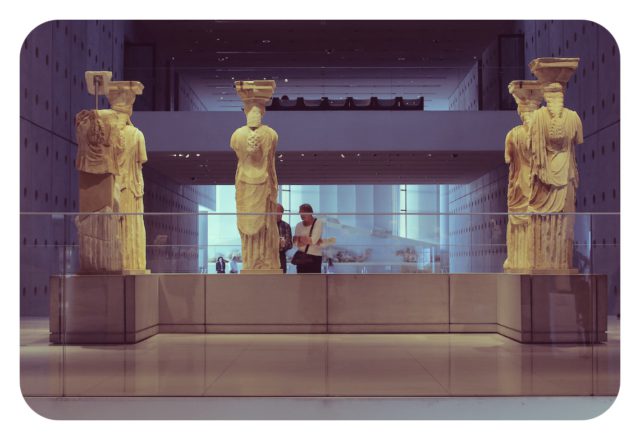 For alternative places in Athens, you have the Kunsthalle Athena. Kunsthalle Athena (Kerameikou 28), a place for art in the district of Metaxourgio and housed in a decadently beautiful neoclassic building with used furniture, which is almost magic and surreal – you get the feeling of an industrial revolution within these four walls.

From 2010, Kunsthalle Athena shed its skin to turn into an art gallery. Thanks to this transformation, nowadays we can surprise ourselves by contemporary visual exhibitions. Although admission is free of charge, donations are welcome.

We’ll spend the evening in Athens among the restaurants and trendy bars.

Funky Gourmet (13 Paramithias St., at Salaminos) achieves what it promises: creative cuisine that stimulates the senses. The two chefs, Georgianna Hiliadaki and Nick Roussos, are dedicated to making magical dishes with their ingredients, and since we’re already in the area, we’ll make the most of Gazi, the district next to the archaeological site of Keramikos, and possibly the best place in Athens for nightlife.

Hipster cocktails? A 15-minute walk from Funky Gourmet you’ll find TAF (The Art Foundation, Normanou 5). The secret of this place, tucked away between the alleys of Thission and Monastiraki, is that you can have a drink and enjoy the art in a real workshop of artists, hence the reason why it attracts bohemians to and keeps them entertained up to 3 am.

And what happens when the day is over? If Athens is characterised by something, it has to be the kindness of the people, at any time, and every day. We raise our glasses to those who keep Athens alive, and even though it’s one of the most ancient still inhabited cities in the world, the capital of Greece has a present and a future.