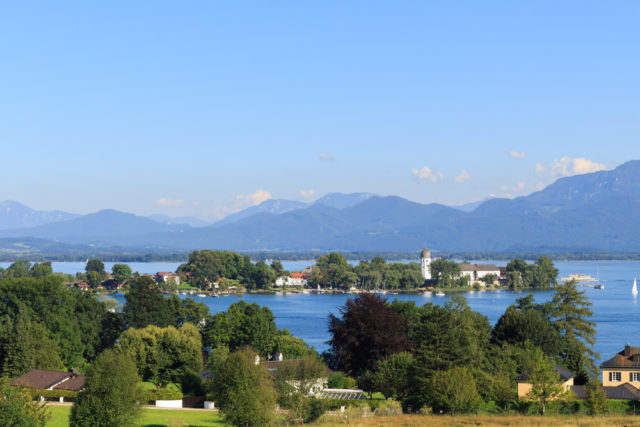 Just over an hour by car or train from Munich, you arrive at rural Bavaria at its best. The shimmering waters of the Chiemsee – 80 square kilometres (31 sq. miles) in size – reflect the surrounding Chiemgau Alps, sailboats dot the horizon and two islands with their own fascinating history wait for your visit.

It’s easy to see why Bavaria’s fairy-tale king Ludwig II chose this location to buy the Herreninsel and to build his last castle, modeled on Versailles and his hero and namesake Louis XIV. Until he ran out of money, at least, and had to leave the castle unfinished.

Your starting point is Prien am Chiemsee, an idyllic market town with a must see attraction: the Heimatmuseum. The building alone with its Lüftlmalerei façade is a little jewel. Inside are collections of richly embroidered traditional wedding dresses and hats (you are even allowed to try them on), the famous Kachelöfen, still made by hand on the Fraueninsel and gracing many a castle in Bavaria and scenes from the times when people made their living from agriculture and fishing. A vivid journey through local history, enhanced by an enthusiastic curator who is only too happy to talk to you (she even speaks English). 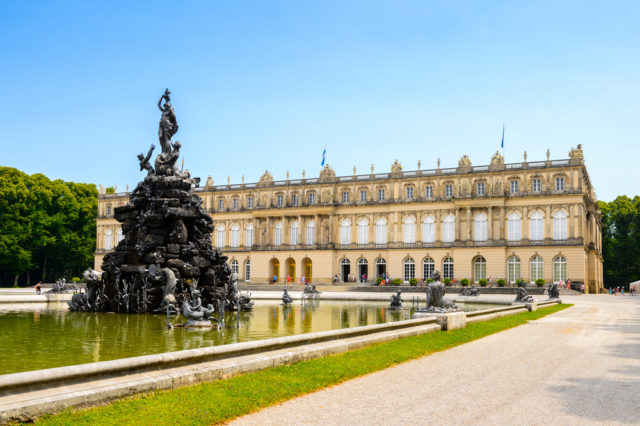 Hop on the green, whistle-blowing, vintage Chiemseebahn steam train and make your way to Prien-Stock, the port. Boats of the Kessler fleet wait for you take you on a journey around the lake with stops at two islands, Herreninsel and Fraueninsel. The ticket allows you to interrupt your journey and explore the islands at your leisure.

Disembark at the Herreninsel and stroll the path through the dense woods to the Herrenchiemsee Castle – or, if you like, hire a ride with a horse-drawn carriage. Curiously, this island is a sanctuary for bats, (and they especially like to hang out in the eaves of the castle), but you won’t see them during the day.

Ludwig started to make his dreams of a Versailles replica come true in 1878. The costs were enormous, but he also did good, because he acquired the island from the previous owner, a lumber company, which intended to cut down and use every last tree.

Join one of the guided tours and marvel at the staircase, the mirror gallery and Ludwig’s bedroom. Whereas the French Louis worshipped the sun, Ludwig adored the moon and its silver light, all of which is reflected in the lavish decorations. His deposition and subsequent mysterious death put an end to the construction in 1886. It’s an eerie feeling to pass from the opulent rooms to the bare cement walls of the unfinished part of the castle, among them a enormous, gaping indoor swimming pool. In front of the castle is a formal garden with sculptures and fountains and a few steps away you can admire deer in an enclosure.

The Herreninsel is also significant in modern history, as it was in the nearby convent that Germany’s current constitution was formulated by a committee from during two weeks in August 1948. The rooms are open to the public. 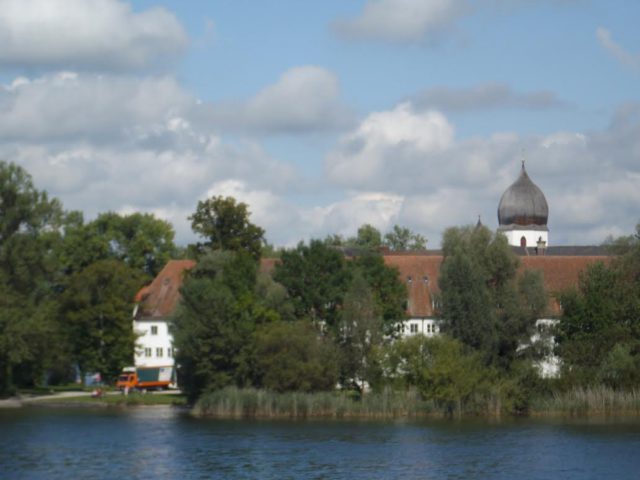 Next stop is the Fraueninsel, my personal favorite. A tiny island which you can walk around in a little over an hour, is dominated by Kloster Frauenwörth, a Benedictine convent founded in 782. King Ludwig II reopened the convent, which had suffered several destructions over the centuries for the nuns, under the condition that they dedicate themselves to education. They still do, but today they also run a thriving cottage industry of votive candles, potent Klosterschnaps (herbal liqueur) and marzipan. You can buy all these products in the lovely shop attached to the monastery, where sometimes even the nuns in their traditional habits act as salespersons.

Since the 1820s, attracted by the beautiful nature, great light and peaceful scenery, many artists settled in a artists’ colony. The tradition continues, and is the reason why I like the Fraueninsel best. On your walk around the island you come across countless galleries and workshops of painters and potters. The ceramic works they produce are fabulous but also quite expensive.  A must visit is to the Klampflüthner pottery workshop (below), in operation since 1609 (examples of their beautiful Kachelöfen can be found in the Hofbräuhaus in Munich and many other prestigious places). 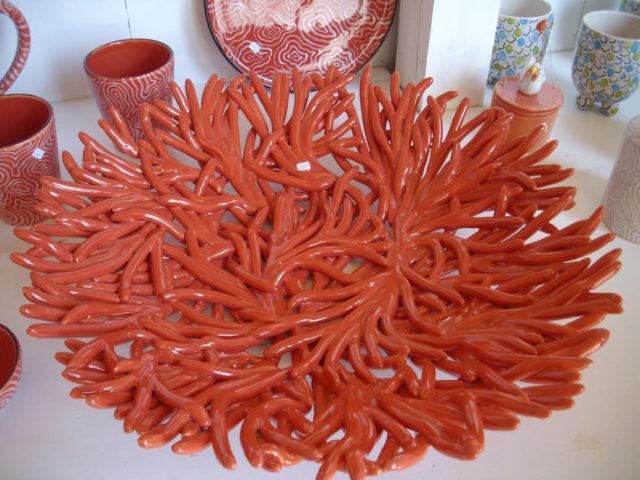 All that walking around will have made you hungry and thirsty, so it’s time for a snack of the local specialty, Renkenfilet. Renke is a fish related to salmon and lives in very deep lakes. The Chiemsee, 73 metres (240 feet) at its deepest point, is just such a lake, and the fishing for Renken has a long tradition in the Chiemgau. It’s smoked and filleted, served in a bun and enjoyed on the wooden benches of one of several smoke houses cum kiosks you’ll find along the way. Washed down with a local beer from the Chiemseebrau Grabenstatt, it will restore your energies in no time.

The round trip on the boat includes one other stop, Gstadt, a pretty town with views over the lake, the mountains and the islands. Then, back in Prien, if you have the time, you might want to spend an hour or two in the Prienavera leisure center. The elegant glass and steel structure offers indoor pools and an outdoor pool fed by hot thermal springs which allow you to swim in the open even in the coldest winter. Add to this saunas, at least 15 kinds of massage, and a relaxing café. It makes for a great end to a day trip full of fun and history away from the noise and hustle of the city.

More information: Tourismus.Prien.de. Best flights into Munich from the USA, from Spain

Inka Piegsa-Quischotte is an attorney turned travel writer/photographer, currently living in Alicante, Spain, whose work has appeared at GoNomad, GoWorldTravel, EuropeupClose, and BBC Travel. Her blog GlamourGrannyTravels.com is dedicated to female baby boomers who love to travel in style and comfort