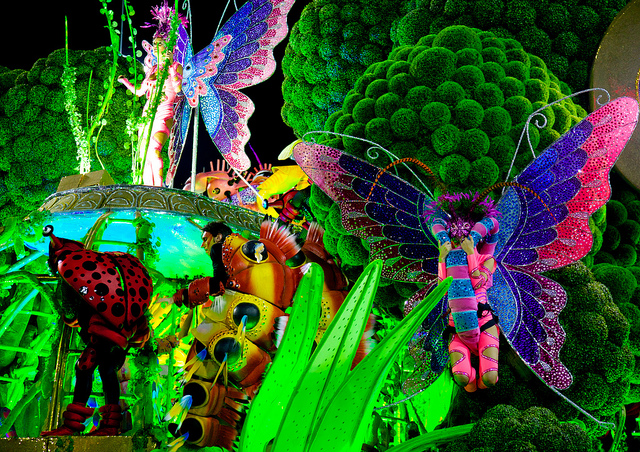 Rio de Janeiro‘s greatest and most famous festival is unquestionably one of the world’s, as well, an over-the-top extravaganza of samba schools parading their raucous music, dancing, and extravagant floats and costumes over several consecutive nights (this year, tomorrow through Sunday, March 5) in the “Sambodrome” designed by starchitect Oscar Niemeyer has to be experienced first hand to be fully believed.

Carnaval dates in some form back to the mid-17th century, but the samba schools just back to the 1920s. Most of the 26 schools are associated with particular neighbourhoods – many working-class or poor – and for many participants, at least half the year is spent in designing and rehearsing their schools’ Carnaval entries. It’s a daunting task, full of meticulous detail. There are floats to be built and costumes to be designed and sewn. Each of the schools performs a particular song, and it lyrics and music must be composed, and the dancing to that song choreographed.

Then, of course come months of once- or twice-weekly ensaios (rehearsals), usually from August through the week before Carnaval itself (many samba schools open theirs to the public, and serve food and drink during the proceedings).

In 2016, the winner of Carnaval was Mangueira, founded in 1928 in Morro da Mangueira, an area located near the neighborhood of Maracanã Stadium, for its production Maria Bethânia: The Girl With the Eyes of Oyá (Maria Bethânia is one of Brazil’s most beloved singers of the last half century, and Oyá is a goddess in candomblé, the Afro-Brazilian religion mixing African animism and Catholicism).

It’s said that Carnaval – not just in Rio but in Salvador and various other localities where the festivities are held not in a massive stadium but in the streets – is for Brazilians not just a symbol of identity and culture but a kind of emotional catharsis against the difficulties of life in a sometimes troubled country and world. It’s certainly inspiring to see such uninhibited joy set loose every summer (which it is here) around this time.

Get more information here; Best fares from the UK, from Spain.