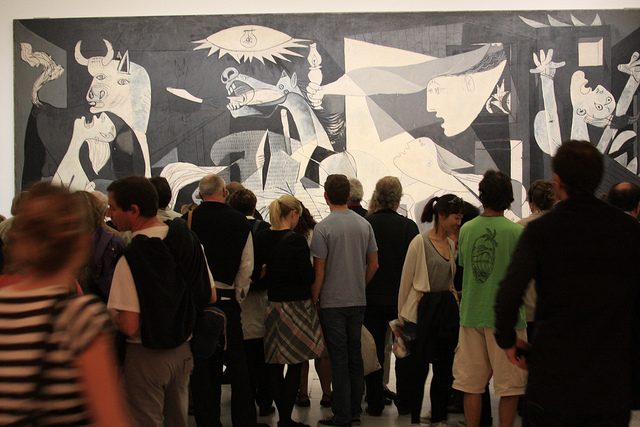 Along with its share of tumult and uncertainty, there’s no doubt that 2017 will also be bringing us the positive, interesting, and uplifting. One such event is in the works at Madrid‘s Reina Sofía Museum, devoted to 20th-century and contemporary art. It’s devoted to one of the greatest artistic giants Spain has ever produced, the painter and sculptor Pablo Picasso (1881-1973). But even more specifically, one monumental Picasso painting produced 80 years ago which many historians and art experts feel is not just his own greatest masterpiece but in many ways the single most defining work of the 20th century.

A raw, anguished anti-war statement painted in 1937 for the Paris world’s fair pavillion of the Spanish Republic, which was then fighting for its existence agains the fascist rebel army of Francisco Franco, it depicts the horrors of the aerial bombing of the Republican loyalist Basque town of Gernika by the forces of Franco’s Nazi allies. Kept at New York City‘s Museum of Modern Art until being returned to Spain in 1981, by when democracy had recently returned, it has been on display at the Reina Sofía since 1992.

And now during its 80th-anniversary year, from April 4 through September 4, a special exhibition will examine the history, context, and impact/legacy of Guernica. The giant canvas will remain in place, but be buttressed by other material – including works on loan from the MoMa and London‘s Tate Gallery – to help illustrate and bring its history to life.

Museum director Manuel Borja-Villel has declared that this “will be the most comprehensive exhibition yet dedicated to this painting” – of the various that have been staged in New York and Madrid these decades past.

Furthermore, according to Borja-Villel, the idea originated at a 2011 conference in with Biriths historian Timothy J. Clark. Clark pointed out that the origin of the painting actually dated back well before the actual bombardment ultimately depicted. Picasso conceived this work during a period of personal and artistic crisis back in the 1920s, which affected all areas of his life and imbued with him a fear of the horrors of war (he was deeply affected by the nightmare of World War I) and the capacity for destruction of the new generation of warships and planes. In fact, it could be said that Picasso in a sense foreshadowed what ended up happening in Gernika, foreshadowing the Nazi blitzkriegs and the other terrible new types of warfare to come.

In short, an amazing work of profound artistic and historic impact, seen in a new light. This is another fantastic example of the kind of revelation that makes travel so worthwhile and rewarding. Come see.