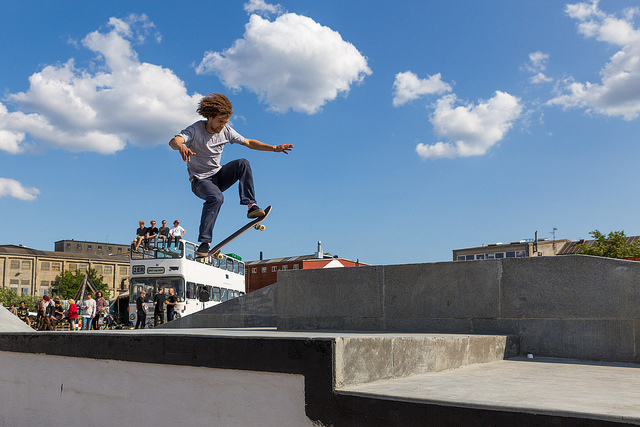 What do Barcelona and Copenhagen have in common? Well, a goodly bunch of things, of course. But today we’re going to be talking about skating. In both cities inline skating has become so popular that they’ve even started competing to become the bigger lure for skaters. And it seems that at the moment, Denmark‘s capital has pulled again in this race.

It used to be that these streets – especially the cobblestones of the historic centre – meant unfavourable conditions for skating and skateboarding. These days, though they’re all the rage. The reason is rooted in the progressive policies of city hall in these past few years. Simon Strange of the city’s culture and leisure department realised that skating and skaters could be leveraged into a great city trademark, and so in 2008 a campaign to promote this was launched.

And since then it seems local support has been wholehearted indeed, and has included practices like annually renovating its made covered skateboarding park (since this is a sport that’s continually evolving); building new ones (especially for when the chill and inclement weather set it) as well as providing other outdoor spaces for skating; holding an annual world competition; and being highly tolerant of skating in areas not designed for it.

Because after all, if you’re trying to set out to make a particular thing or activity into an emblem of your city, it needs constant promotion in public, using the cityscape itself as its canvas. And so these days skating is embedded in the fabric of street life and another aspect of what makes the city stimulating and lively. That in turn can bring in more visitors, and even residents. to a city that is one of the world’s most advanced, with among its highest quality of urban life. muy positivo.