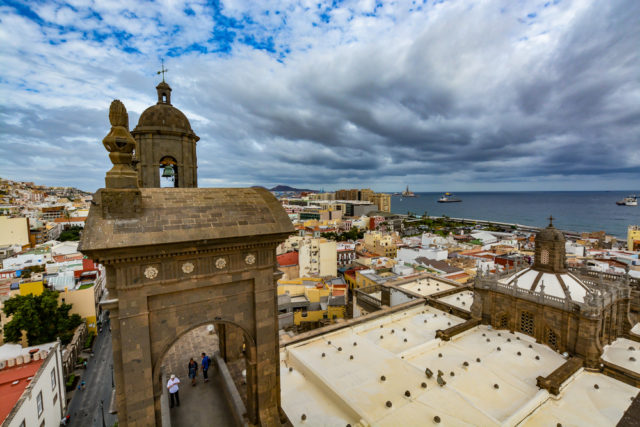 There’s an excellent reason why Gran Canaria has become such a popular holiday destination – yes, its delightful year-round warmth, but also the fact that it really does offer the proverbial something for everyone – the lazy, the active, singles, families, foodies, nudies, and much more.

Many make a beeline from the airport to the beach resort areas along the coast, where they stay put without visiting the island’s capital, Las Palmas (pop. 384,000), which is also the co-capital of the Canary Islands as a whole. Especially in recent years, it has become a creative, cosmopolitan, and stimulating city, especially in districts such as Vegueta and Triana.
Vegueta is especially noteworthy as one of the capital’s most interesting areas – historic and modern at the same time. Its pleasant streets especially come alive on Thursday evenings, the tapas nights which bring out locals and visitors alike for good food, entertainment, and general enjoyment.

Also very centrally located, Triana puts on more bohemian airs and is home to much of Las Palmas’ cultural life, with its theatres, cinemas, galleries, and other venues. One top lure is Gabinete Literario (Plaza de Cairasco 1), housed in an iconic neoclassical/Art Nouveau building, and hosting various and sundry cultural events and shows on a variety of topics including gastronomy. Speaking of which, here you’ll also find a superb restaurant, La Terraza del Gabinete, with contemporary cuisine and lovely views. 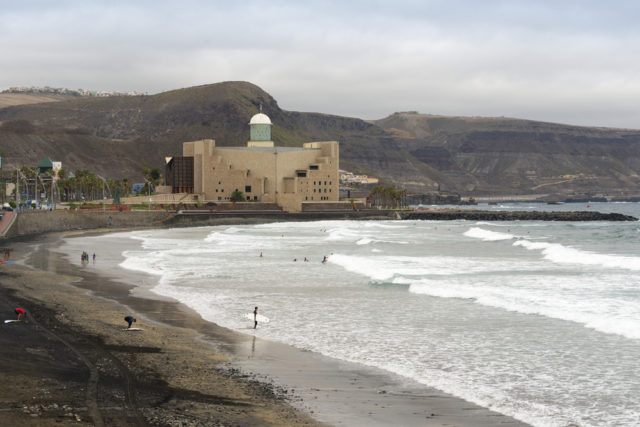 Music is also a major part of the local cultural scene, and revolves especially around the Auditorio Alfredo Kraus (above), designed in the 1990s by Óscar Tusquets toward the end of the city’s in-town beach Playa de Las Canteras (where by the way until January 9 you’ll find an amazing Nativity scene made out of sand). Seating 1,656, it’s home to the Las Palmas Symphonic Orchestra and has hosted some of the great names in 20th- and 21st-century classical music, especially during the Festival Internacional de Música de Canarias in January and February.

If you should happen to be here this week, see if any tickets are left for the fifth annual Concierto Popular de Año Nuevo on December 29 and 30, when the house orchestra serenades the public with great works from the likes of Bach, Verdi, Chueca, Bernstein, Bizet, Strauss, and others.

Finally, a bit of news for 2017: in addition to its existing attractions, a new aquarium, gracefully called Poema del Mar (Poem of the Sea) will open its doors this coming summer with cutting-edge exhibits, education, and sealife conservation efforts.