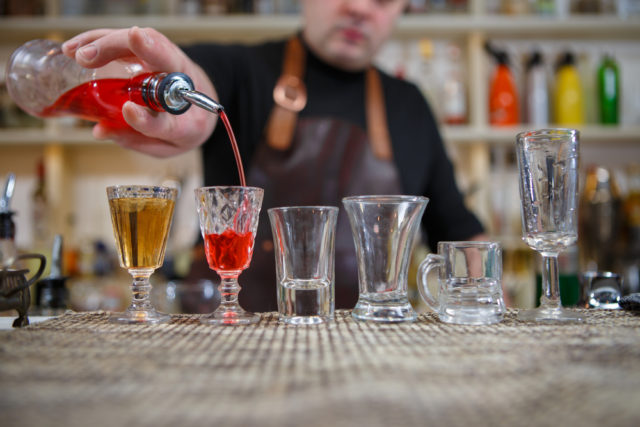 In addition to trying the food in all the places we travel, it’s fascinating to see how different countries , beyond beer and wine, enjoy very different kinds of spirits, liqueurs, cordials, and distilled beverages. Much has been written about what each culture’s favourite alcoholic beverages says about it, but in the meantime, for visitors, it’s a flavourful and intoxicating world out there. This blog covered the spirits of Spain earlier this year – now we turn our gaze and our palate to a primer from ten countries across Europe:

The precursor to gin, the juniper-flavoured national liquor of the Low Countries – is basically distilled malt wine (rye, wheat, corn) with herbs and cloves added. There’s an “old” style (40-percent alcohol) and a “new” (jonge) style (35 percent), along with an aged version called korenwijn. It’s served both room temperature and (more commonly these days) chilled, and not uncommonly with a beer chaser. 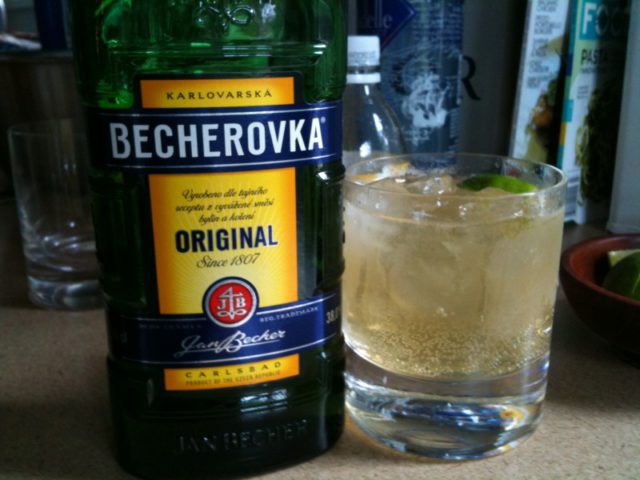 This thick, distinctive bitters was invented in the Bohemian spa town of Karlsbad (now Karlovy Vary) in the early 19th century, based on a secret recipe of more than 20 herbs and spices and today ubiquitous throughout this country and neighbouring Slovakia. Now owned and more widely distributed internationally by Pernod, Becherovka has 38 percent alcohol, notes described as cinammony and gingery, and is quite often sipped straight, but also occasionally in cocktails such as the Beton (Becherovka and tonic).

As with many areas of cultural innovation, the French over the centuries have created an embarrassment of riches when it comes to famous spirits. The greatest of them all is no doubt Cognac, grape brandies from the eponymous region, double distilled in copper pot stills and aged in French oak for at least two years. Armagnac, from its own region, is similar but heavier (distilled only once). Another brandy variant, Calvados, is distilled in Normandy from the cider of more than a hundred specific types of apples.

From apples to oranges, Cognac is also the base of the bitter orange liqueur Grand Marnier. Cointreau, meanwhile, is also a classic bitter orange liqueur, but made from neutral spirits instead of brandy. Down in the southeast, especially the Côte d’Azur in and around Marseille, anise is the flavor of pastis, a liqueur drunk diluted with water as a milky yellow drink, served cold, sometimes over ice. And finally, in the tradition of monastery-produced tipples, there is Chartreuse, produced by Carthusian monks in the Alps since 1601. Made from some 130 botanicals, it comes in a 110-proof green variety and a sweeter, 80-proof yellow variety. 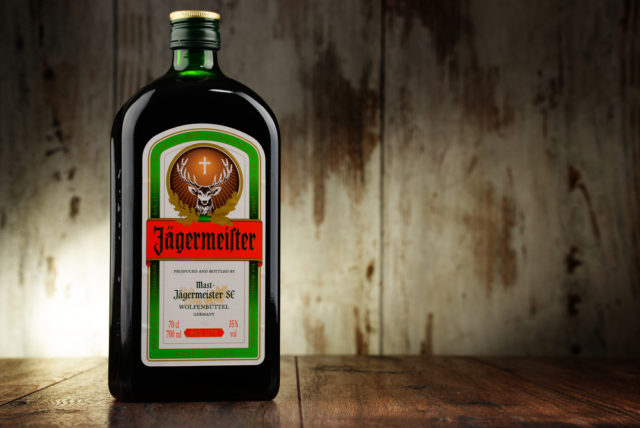 Here, Schnapps is king. Distilled from grain, potatoes, herbs, but especially fruit, it’s usually clear and colourless; the most common fruit flavours are apple, apricot, cherry (one of the best known, called Kirschwasser), pear, and plum. Sweetened herbal schnapps (Kräuterlikören) abound, as well, such as the now internationally famous Jägermeister (above), whose 56 herbs and spices lends it a flavour some describe as a cross between liquorice and mint.

Greeks have come up with a number of spirits, such as Corfu’s Koum Kouat liqueur (from kumquats, cultivated here for nearly a century); clear, grappa-like Tsipouro; Tentoura, a cinnamon, clove, and nutmeg liqueur; brandylike Mastika, made from tree resin on the island of Chios; and lemony Kitro from the island of Naxos. But the country’s signature is of course ouzo, the anise liqueur similar to France’s pastis, and drunk in a similar way. 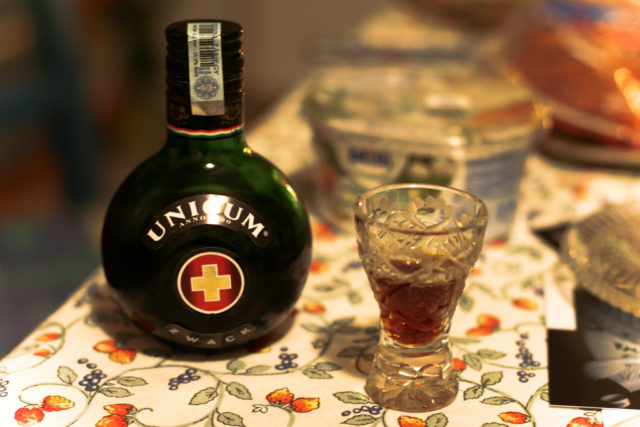 This country’s traditional herbal liqueur since 1790 – though the production of the original recipe was suspended during the 45 years of Communism – oak-aged Zwack Unicum (above) is brewed from some 40 botanicals and is not unlike some of the German Kräuterlikören: dark and medicinal, a mix of sweet and bitter. Traditionally sipped at room temperature, these days it’s not uncommonly taken chilled or on the rocks.

Another culinary superpower with a wideranging distillation tradition, the bel paese has become celebrated for a number of intense products. The clear, grape-pomace-derived digestif grappa, ranging from 35 to 60 percent alcohol, is produced in a number of regions, as is Sambuca, Italy’s equivalent to the clear liquorice liqueurs ouzo and pastis. Several other flavoured liqueurs are regionally associated, most notably almond-flavoured Amaretto (with Saronno, up in Lombardy), hazelnut Frangelico (with the Piemonte town of Canale), and the lemony, very popular limoncello (with southern Italy, especially Naples, Sorrento, and the Amalfi coast).

Finally, a couple of bitters are also quite popular in Italy and beyond. Barrel-aged Fernet Branca, with 39 percent alcohol, is not unlike Unicum in its sweet-meets-bitter-and-spicy, while Campari is less potent (20-28 percent) in addition to herbs includes cascarilla aromatic tree bark and fruit like chinotto (bitter orange), which gives it a reddish colour. 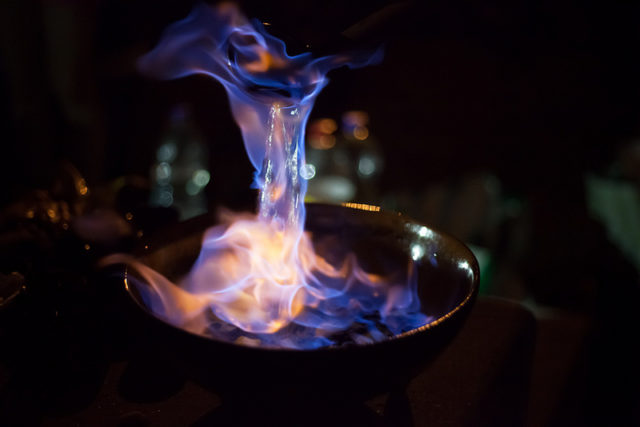 Generally known more for its wines than its spirits, Spain nonetheless has a number of beloved regional tipples, such as coffee liqueurs from northern areas like Asturias, Galicia, and León; orange-hued pacharán, brewed in the Basque Country, Navarre, and parts of Castilla and León from the fruit of the blackthorn shrub; and the Canary Islands’ ron miel (honey rum), based on sugarcane brandy and the superb local honey. In addition, the nearly century-old Licor 43 is a yellowish, vanilla-and-fruit-flavoured liqueur which enjoys some international popularity. There are a couple of distinctive cocktails worth mentioning, too. Agua de Valencia is a frosty potion which mixes the juice of Valencia’s famous oranges with cava sparkling wine, gin, and vodka, while Galicia’s queimada (above) is a dramatic, flaming witch’s brew of ancient Celtic origin, of local brandy mixed with sugar, lemon peel, and fruit.

Perhaps this country’s most famous booze is Scotch whiskey, distilled in five regions of Scotland from malted barley (or sometimes wheat or rye) and coming in single-malt or blended varieties. But gin is even more popular, the juniper-flavoured liquor made from malt wine or neutral spirits in a wide range of varieties and brands throughout the UK (and these days, far beyond, as well). Another popular and very English tipple is Pimm’s, a reddish liqueur with a subtly citrusy and spicy taste and most commonly mixed with ginger ale, fruit juice, lemonade, or sparkling wine.