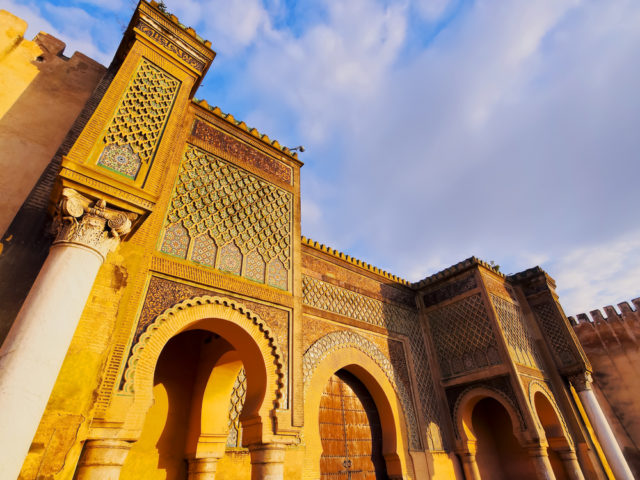 The kingdom of Morocco is rooted in a series of North Africa Islamic dynasties stretching back to 974 AD, and with the ebb and flow of history, the various dynasties at various times occupied four “Imperial Cities” as their capitals. Fez is the oldest, Marrakesh is the best known, and Rabat has the status of being the seat of the current king and national government. But the fourth, Meknes, is the least well known – and yet very worth the time of any visitor to Morocco, as a day trip or overnight from Fez.

Founded in the 11th century as a military camp, centuries later, in the 17th century, Meknes was turned by sultan Moulay Ismail (1672–1727), of the Alouite dynasty that still rules Morocco today, into his capital. As one of the newer such cities, Meknes differs from the others in that its souk and old quarter were built in a style with some European influences – indeed, sometimes reminiscent of the Spanish Moorish style that developed during the Muslim occupation of much of Iberia from 710 to 1492.

Today, Meknes is a mix of historic and modern, with a population of 836,000 (metro area one million), but of course its main allure to visitors lies in the old city and medina laid out some three centuries ago. Other pluses include being less crowded and easier on the wallet. 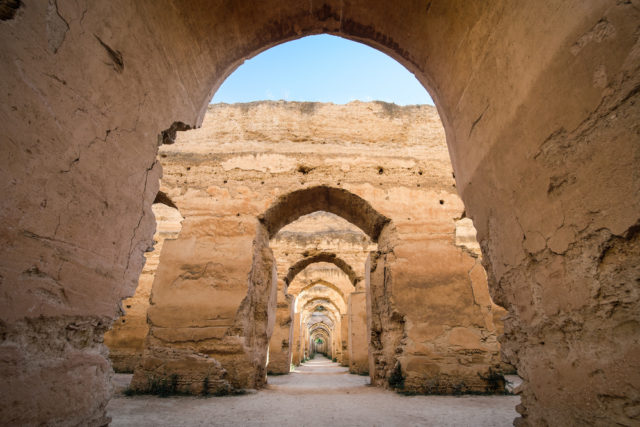 The famous entrance gate to the old city, the Bab Mansour (top), is located on the Place Hedim, a square  reminiscent of a smaller version of Marrakesh’s Djmaa el Fna, with performers, vendors, and just locals hanging out, and is a masterpiece of the mosaic art, accented by columns from the nearby Roman ruins at Volubilis. Once through the 17th-century city walls, a classic Maghreb souk lies before you, its winding lanes and market stalls and shops packed with exotic sights, sounds, and aromas (again, better prices here than in Marrakesh and Fez!). Also in here is the Dar Jamaï Museum of Moroccan art, housed in a gorgeous and expansive late-19th-century townhouse (another, newer museum well worth a look is the Musée de Meknès, showcasing the city and region’s traditional arts and crafts, including ceramics, tapestries, and jewelry.

Other old city highlights include Moulay Ismail’s sumptuous mausoleum, (non-Muslims may visit the outer areas, as well as see into the interior – including the sultan’s tomb – from the entranceway); other religious buildings such as the Bou Inania Madersa, a 14-century religious school covered with exquisite carving and calligraphy; the elaborate Ambassadors’ Hall, where foreign ambassadors were received, and beneath it, subterranean vaults where tens of thousands of Christian slaves were imprisoned; and remnants of the sultan’s many palaces (including, memorably, the massive royal granaries and stables). 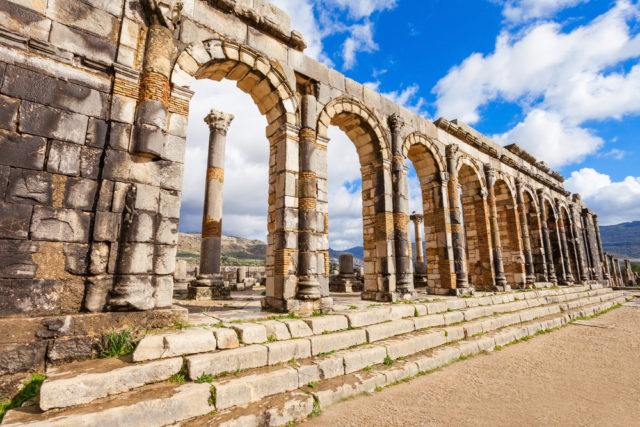 There are also a pair of out-of-town excursions I highly recommend. First is Oalili (aka the abovementioned ancient Volubilis, above), once the capital of the local colony of the Roman Empire, with various remnants of villas, streets, and walls, including some impressive mosaics (much of the statuary and artifacts, however, were removed to the archaeology museum in Rabat). The second is Moulay Idriss, a town named after its founder, a great grandson of Islam’s prophet Mohammed who also founded the Maghgreb’s first Arab dynasty, the Idrissids, back in the 8th century. The main site here is his green-roofed tomb – which however can only be viewed from the outside if you’re non-Muslim – but the town’s atmosphere and winding lanes are also remarkable to experience.

As for Meknes dining and accommodations, you can opt to stay in the Ville Nouvelle, the modern part of town with its full cohort of restaurants, hotels, nightlife, and shopping, or overnight in old-town riads (traditional townhouses) such as the Riad Felloussia, which offers four atmospheric, traditionally decorated suites for 100 euros or less.