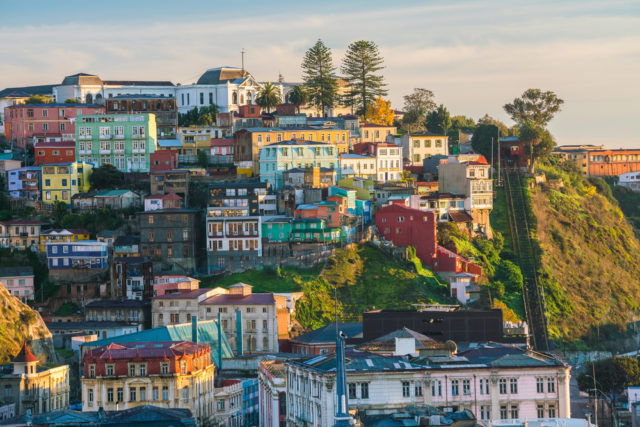 Out on Chile‘s coast just under three hours from capital Santiago, Valparaíso (pop. 275,000, metro 930,000) is not just this country’s second largest urban area but one of South America‘s most colourful cities. The old colonial-era buildings of its historic, UNESCO World Heritage core nestle into the hills which surround it – rising, falling, looking out to sea.

The artfulness of Valparaíso’s cityscape is reflected in the cultural life of a place which continues its tradition of attracting artists, writers, architects, and other creatives, along with culturally minded visitors who delight in getting lost amid its streets; happening across overlooks offering varying perspectives of the city; and experiencing art along the streets – its murals, its galleries, its fascinating shops almost like worlds unto themselves. 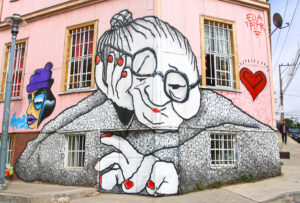 One of the best known artists associated with Valparaíso, for whom the city was a kind of muse, is Nobel-winning poet Pablo Neruda. From his local abode, La Sebastiana, atop Florida Hill, you can spot some of the many street murals which spread art throughout the city, a tradition dating back to the early 1970s, when they sprang up as political manifestoes by the supporters of then president Salvador Allende. The tradition of colourful free expression across the cityscape has remained strong and proud.

The city’s oldest neighbourhood is Barrio Puerto, a district that’s always a cheerful hurlyburly of activity, with fishermen and sailors mingling on the streets with vendors as gulls cry overhead and trams rumble by. Here you’ll also find more cool street murals, as well as some of the best eateries in the city to enjoy the star local dish: caldillo de congrío,  a hearty, eel-based fish stew (Neruda even wrote a poem to it!). 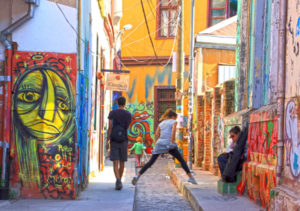 Over in the Barrio de Bella Vista, meanwhile, visitors will find the Museo a Cielo Abierto (Open-Sky Museum), set up in the 1990s and consisting of a series of outdoor street murals, featuring work by the likes of Chile’s Gracia Barrios and the Catalan José Balmes. More still can be found on the walls of many of the city’s hotels and especially its hostels, as well as up on Cerro Alegre (Happy Hill), a place popular with visitors, where contemporary urban street art is created by groups like Caos and individual artists such as Inti Castro, who specialises in hummingbirds. You can continue the walk over on Cerro Cárcel (Jailhouse Hill), bear the Valparaíso Cultural Park – which offers a bonus of spectacular views out over the city.

You can get around this hilly city via bus (to get uphill), trams (on level ground), and even occasionally elevators, such as the one that takes you up Polanco Hill where another round of grafitti and murals awaits.

And to make the most of the wealth of street art in this singular city, consider signing onto a Valpo Street Art Tour, which can also introduce you to some of the artists.