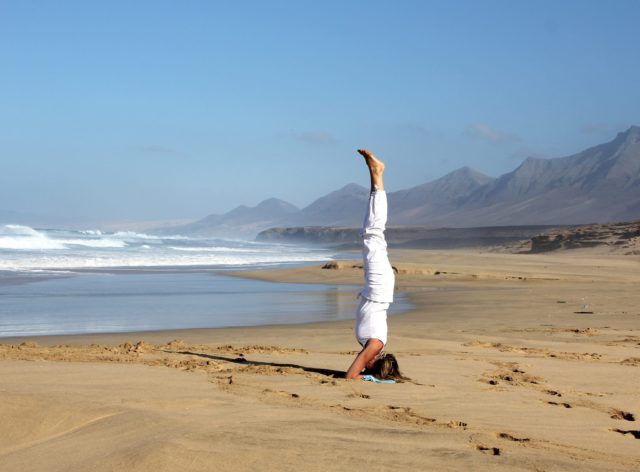 On a visit this past summer to the Canary Islands‘ second largest island, Fuerteventura, to review Fuerteventura hotels for the travel section of The Telegraph, between site inspections and time in my room pecking away at a laptop, I was thrilled to have the chance to discover the town and beaches of a part of the southern Jandía Peninsula called Cofete. And I found it fantastic indeed.

I was privileged to explore in the company of Yoga Fuerteventura’s Caroline Traynor Bohny. Yoga is about combining the elements, and Cofete does just that. As Caroline explains, “the fire comes in the form of the sun, a near-constant companion on the island; the wind you can see as well as feel; the water the Atlantic Ocean; and earth the sand underneath our feet.”

This is Fuerteventura at its most unspoilt. There are no tourist developments here, just what still feels like a virgin beach of white sand located on the southwest tip of the island – part of which is given over to a cemetery. 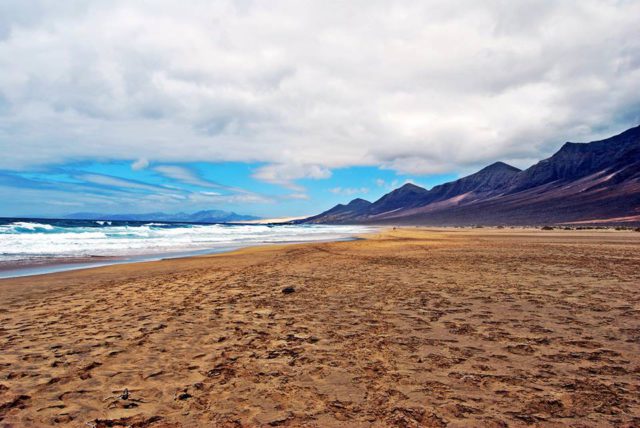 For Caroline, Cofete’s a great place to disconnect from the modern world. Instead, we attuned ourselves to nature. Adopting the classic starting lotus pose (padmasana), I found myself crossing my fingers, desperately hoping that rumours of the Lopesan Hotel group having bought the area turn out to be false.

Although by no means cold, for July it was pretty overcast. Making the prospect of an Atlantic dip feel more of a dare than a carefree exercise. Still, I took the plunge; warming up with a jog which saw me quickly lose our stretch of Cofete’s fellow handful of visitors, accompanied by the roar of the ocean and the not-so-gentle caress of wind on my back.

Another reason I’d added Cofete to my Fuerteventura bucket (and spade) list was Villa Winter. This was the erstwhile abode of one Gustav Winter, a German engineer, born in Bavaria‘s Black Forest in 1893, who built this isolated property back in 1946.

The timing of the construction has led to some fantastical theories. There’ve been suggestions that defeated Nazis arrived to Cofete’s shores by submarine and at Villa Winter they received facechanging plastic surgery before heading for a new life in South America. 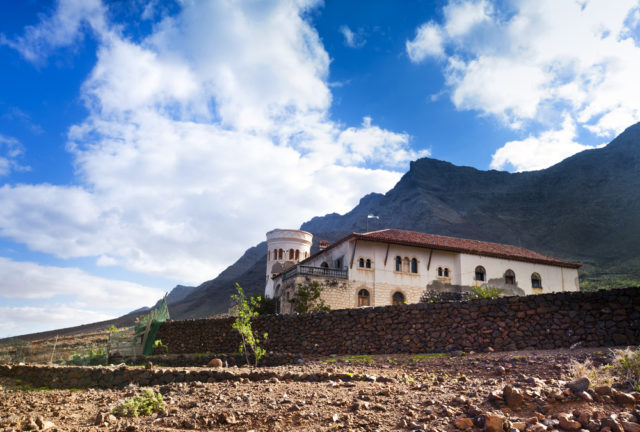 Caroline had warned me that the villa had fallen into some disrepair. The last time she had gone, onions were growing in the living room. Although still ramshackle, Villa Winter had received a bit of a cleanup since then.

We were “greeted” by the Canarian caretaker, who shamed us into making a donation before we entered, saying that most tourists didn’t bother. And that didn’t pay for the restoration work he’d undertaken.

Unfortunately, much of that work seemed to have eradicated any link the property had with the Winter family. Instead, there were photos of the caretaker’s ancestors. This provided a gateway to a Canarian past which didn’t interest me nearly as much as the property’s Teutonic mythology.

We did receive a warmer welcome at the hamlet’s only bar. The manager of the establishment in which I was staying at the time had proudly told me he hailed from Cofete. I had imagined a rather larger settlement than the ghost town which greeted us – where nothing moved much, save the tumbleweed blowing in the wind. Along with the not-so-occasional bus which ferried in tourists from the resort of Morre Jable who wanted to go off the beaten track.