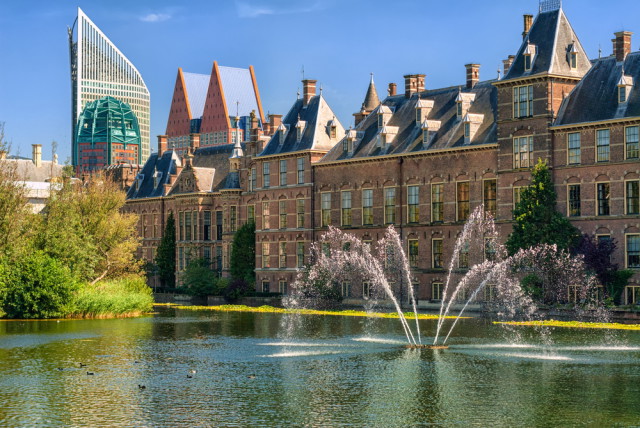 Quick, what’s the capital of the Netherlands?

Trick question, kind of – it’s Amsterdam, of course. But that’s just its official title by a quirk of history; pretty much the entire Dutch government, along with foreign embassies (not to mention more than 150 United Nations and other international organisations) is in fact located in about an hour south in Den Haag, the Netherlands’ third largest city (pop. 568,000, metro area 1.1 million).

And for visitors, the green, leafy, generally prosperous Hague provides not just some stately and distinguished architecture (mixed with its share of cutting-edge contemporary) but also some interesting culture and sophisticated dining. In short, very much worth at least a day trip from Amsterdam and quite arguably more.

The city’s twin hubs include the Gothic lakeside Binnenhof (above), the Netherlands’ central government complex whose oldest bits date back to the 13 century and which includes the world’s oldest operating parliament building – which can be toured via the ProDemos Visitor Centre.

The other is right alongside: the square ingeniously named Het Plein (the square), which among other things is the site of one of the country’s top art museums, the Mauritshuis, a 17th-century palace containing some of the crème de la crème of European and especially Dutch/Flemish painting (such as Vermeer‘s famous Girl with a Pearl Earring). There are a number of nice restaurants and cafés here, as well.

Hague highlights continue with the International Court of Justice in the Vredespaleis, which has a visitor centre and offers tours when the court’s not in session (so sorry, probably no international war criminal spottings!). The 15th-century Grote of Sint-Jacobsuskerk, a Protestant church that’s one of the Hague’s oldest surviving buildings, is also worth a visit, as is the Gevangenpoort (Prison Gate) Museum, in the 13th-century onetime main entrance to the Binnenhof as well as jailhouse, now a prison (and given the times, torture) museum.

If you’re especially interested in art, besides the Mauritshuis you’ll want to check out the Prins Wilhelm V Gallery (the Netherlands’ first museum back the the 17th century, recently restored and harbouring some 150 Old Masters); the Bredius Museum (Baroque artworks as well as silverwork and porcelain); and the Gemeentemuseum (Municipal Museum, with 19th- and 20th-century biggies such as Van Gogh, Kandinsky, Monet, Bacon, and especially the Netherlands’ own Piet Mondrian). Several blocks away, another museum displaying just one single painting is the Panorama Mesdag, an enormous, 360-degree affair created in 1881 to depict the Hague’s resort district, Scheveningen. 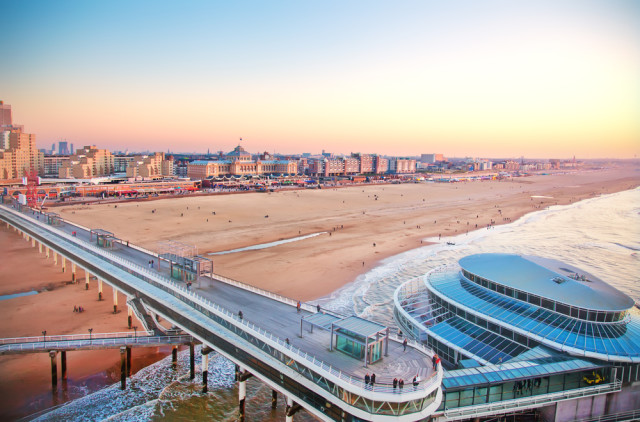 For yes, there’s another very different side to the Hague: the beach/entertainment area at the shore four kilometres (2½ miles) west of the Binnenhof has a bit of the vibe of Brighton or Blackpool. With bathing-resort roots going back to 1818, Scheveningen boasts a long, sandy beach which besides bathers these days also attracts windsurfers and kiteboarders; an iconic pier; the grande dame Kurhaus hotel; and attractions including the Sea Life Museum aquarium and Madurodam, a scale-model Netherlands – dykes, windmills, tulips and all – which is both adorable and educational!

After dark, Scheveningen especially serves up a large menu of eating and nightlife options, but even back around the old part of the city it’s worth noting that there’s a superb international dining scene (to appeal, after all to the many international expats), including some of the Netherlands’ best cuisine from former Dutch colony Indonesia (in my firm opinion, all foodies should bucket-list the Indonesian rijstaffel, a banquet of small, scrumptious dishes). The music scene is pretty good, too, from metal, blues, roots, reggae and soul, club nights and more at Paard van Troje to performances by the renowned Nederlands Dans Theater and concerts by the Residentie Orkest, The Hague’s symphony orchestra, which currently performs at the Zuiderstrandtheater.

So, see? Sometimes being “sent to the Hague” isn’t a bad thing at all! 😉

Best fares to Amsterdam from the USA, from Spain.