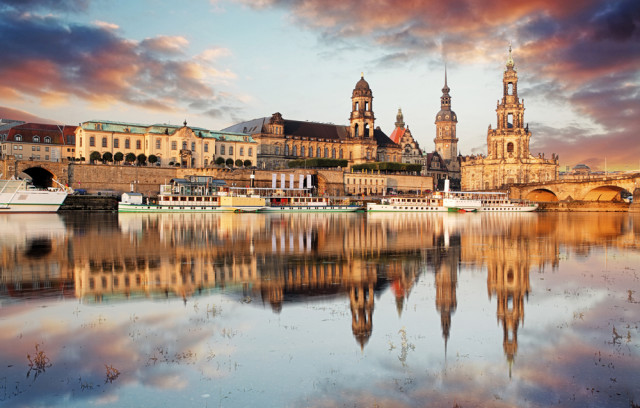 To visit the capital and largest city in Germany’s state/region of Saxony today, you might never guess that the magnificent Baroque and Rococco Altstadt (Old Town) we see today lay in absolute ruins after the infamous carpet bombing of World War II. Even today, there are gaps in the cityscape, but for the most part Dresden in 2016 (pop. 586,000) is a handsome mix of modern industrial and an impressively historic (the city’s settlement dates from 1006), risen from the ashes on the banks of the Elbe River a couple of hours south of Berlin.

One of its most impressive and iconic buildings, for example, the mid-18th-century Lutheran Frauenkirch (Church of Our Lady) on Neumarkt square, painstakingly reconstructed from the rubble over the course of decades. Its ruins long treated as a monument to world peace, it wasn’t finished, in fact, until 2005, but now the spectacular dome once again graces Dresden’s skyline.

Another, brought back many years ago, in 1964, is the lavish early-18th-century palace of King Augustus the Strong, which is is now home to an Old Master Gallery, a porcelain collection, and a museum of vintage scientific instruments. A third is the Semperoper (below), the spectacular neo-Renaissance opera house dating back to 1878 and restored in 1985, open for tours and once again an epicentre of Saxon culture, extending a groundbreaking history that included world premiers of immortal works such as Tannhäuser, Der Rosenkavalier, and The Flying Dutchman. And there’s also a grandiosely Rococco Catholic Hofkirche (Catholic cathedral), also built in the 18th century and restored in the 1980s.

Other restorations have been even more recent, such as the sprawling Residenzschloss, the castle of the rulers of Saxony until World War I, which started as a Romanesque keep in the 13th century and its postwar restoration wasn’t finally completed until 2013; today it houses a veritable treasure trove including all manner of bejeweled items as well as Ottoman art, armor, coins, prints, and other historic artworks collected by these rulers. 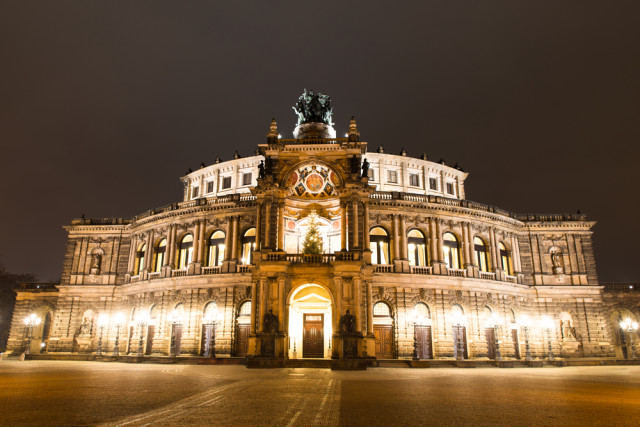 Many of Dresden’s most notable other landmarks date from the 18th-century Enlightenment period or from the 19th century. A great example from the 1880s is the stately Albertinum, which also is now home to some extraordinary art: the “New Masters” Gallery with works from the 19th century (including the likes of Gauguin, Van Gogh, and Monet) to today; and a Skulpturensammlung of remarkable sculptures (including Rodin’s The Thinker) dating back to classical antiquity. Then of course there’s the Semper Gallery (designed in 1855 by the architect of the eponymous opera house) next door to the Zwinger, home to the city’s Old Masters collection, starring the likes of Raphael (including the famous Sistine Madonna), Titian, and Rembrandt.

Parenthetically, perhaps – clean freaks alert! – the most unusually names, at least, is the German Hygiene Museum, founded by a mouthwash magnate but which these days is actually a fairly interesting survey of the life sciences as well as public health.

Across the Elbe River, the Neustadt (New City), mostly escaped wartime damage and is today a lively mix of alternative and upscale. There’s the Innere Neustadt, which is “new” only in comparison with the Altstadt, and still is full of historic buildings and landmarks dating back to the 18th century, along with a high concentration of hotels, restaurants, and nightspots from beer gardens to cutting-edge discos.

Best fares to Berlin (a bit over two hours from Dresden by car, two to four hours by train) from the USA, from Spain.