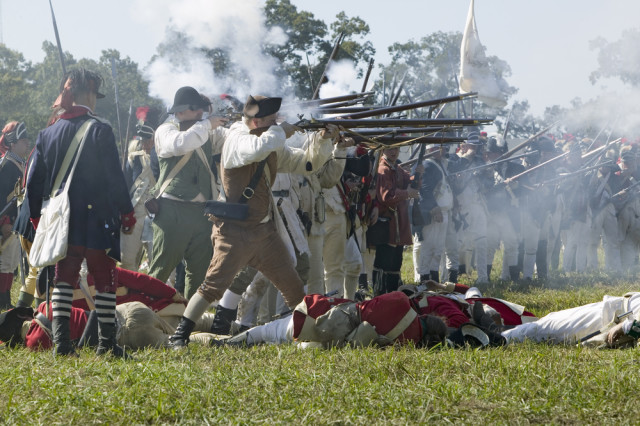 In school, U.S. kids still learn the patriotic poem connected to the battle of Concord and Lexington, Massachusetts that begins, “Listen, my children, and you shall hear, of the midnight ride of Paul Revere…” And on this long weekend of their country’s Independence Day, today, many of their families are taking the opportunity to explore their country’s founding by including in their holiday plans this and other of the sites of key events in its War of Independence from Great Britain – all of them preserved as national park sites; most of course in the 13 original colonies; and all east of the Mississippi River. Here are the top five most important:

But its main relevance to revolutionary history is the Yorktown Battlefield, the 1781 battle/siege against the forces of General Charles Cornwallis that finally won U.S. independence. Here visitors can see the siege earthworks, the historic house that served as Cornwallis’ headquarters and another where the surrender was negotiated. Volunteers recreate military maneuvers (top), cannon firings, and the like, and there is of course a comprehensive visitor centre.

Perhaps the greatest political milestones of the revolution were the 1774-6 sessions of the Continental Congresses, held in Philadelphia in what was then Pennsylvania’s state house, which among other things ratified the Declaration of Independence on July 4, 1776. The building also played a key role in the first decade of the new country, including as the place where the current Constitution was ratified in 1783. Today it is of course the epicentre of the city’s Independence Day celebration, with a parade, ceremonies, and assorted hoopla. As for sightseeing, in addition to the hall itself (you might be surprised how small the famous Congress chambre, below, is!), there’s a visitor centre, another centre housing the famous Liberty Bell, and a museum dedicated to key Founding Father Ben Franklin. 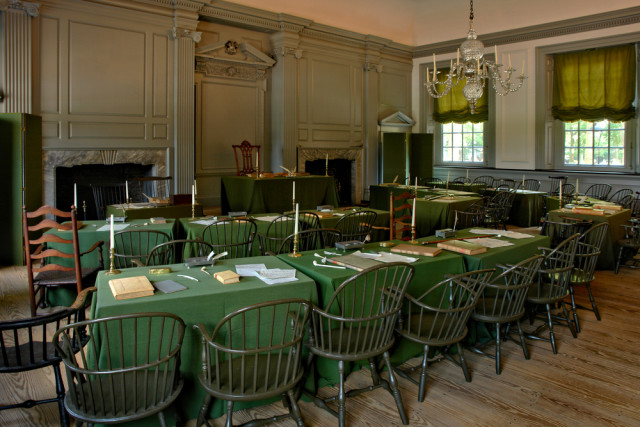 This was essentially where it all began – the emergency that Paul Revere was riding about (though the 1860 poem by Henry Wadsworth Longfellow tinkered with some of the details), sites of the April 1775 battles of Lexington and Concord, pitting local militias against the colonial British forces and essentially launching the military action of the American Revolution, including “the shot heard ‘round the world”. Located a very short drive west of Boston on Route 2A, its 364 hectares (900 acres), anchored by visitors centres in Concord and Lexington, include an eight-kilometre (five-mile) trail and various restored period houses and structures.

U.S. schoolchildren also learn that their country’s war of independence had its grueling patches, even those when it looked like the whole enterprise might not survive. The rough winter of 1777-78 in this camp outside the town of King of Prussia (a half hour southeast of Philadelphia) is Exhibit A. The 14-sq.-km(5½ sq.-mile) site features a tour route (self-drive or 90-minute tram tour) with nine stops at various restored encampments, monuments, and historic buildings including American commander George Washington’s headquarters.