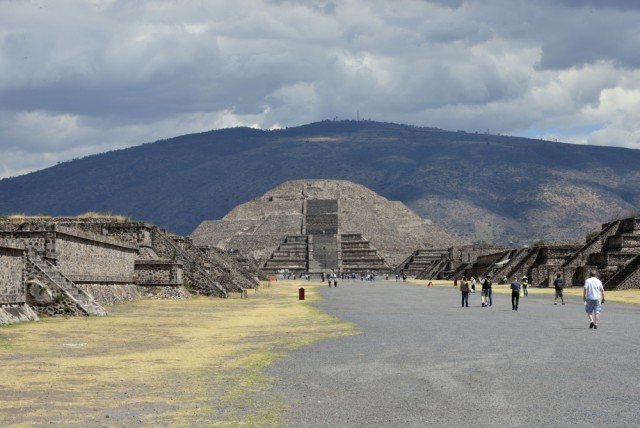 I will never forget, nearly 40 years ago, laying eyes for the first time on my first ancient archaeological site. About an hour’s drive north of Mexico City, this UNESCO World Heritage complex of temples absolutely electrified my imagination and became a driving force in my fascination with not just archaeology but travel and world cultures in general. Teotihuacán has that kind of impact.

Even after decades of study, archaeologists still aren’t quite sure who (Toltecs?  Otomi? More likely Tonotacs?) actually built one of the first of the great cities of the Western Hemisphere as early as 400 BC, sprawling across 21 square kilometres (eight sq. miles) and thought have reached a population as high as 200,000 – the largest city in the hemisphere until the 15th century. Teotihuacán is thought to have met its downfall during a period of drought and famine around the 7th/8th century AD, but even afterward, influenced the culture of the Aztecs who arrived centuries later.

The core open to visitors today consists of a grid with a broad central boulevard, the Calle de los Muertos (Street of the Dead), running 2.4 kilometres (1½ miles) north-south and linking various structures, most notably the Pyramid of the Sun (71 metres/234 feet high), the Pyramid of the Moon (46 m/150 ft.), and the Temple of the Feathered Serpent (which the Aztecs called Quetzalcoatl), a six-stepped truncated pyramid with elaborate walls and sculptures (detail below). 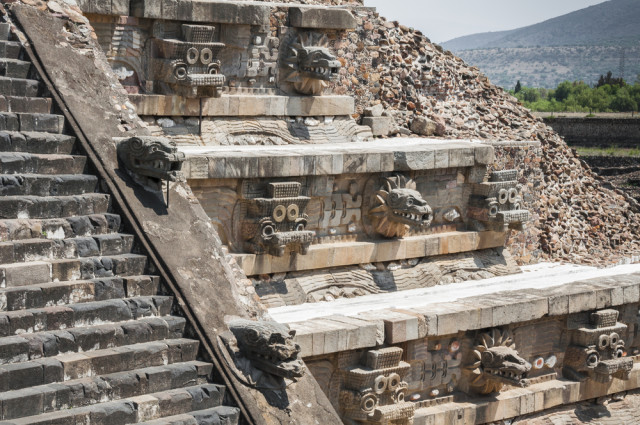 In other parts of the site there are other fascinating buildings such as the Palace of the Jaguar, as well as multi-storey living compounds where visitors can get a good look at pictograms and murals featuring all manner of gods and animals. And you’ll want to make time for the pair of museums on the site that display and explain the artifacts and murals, and their context; there are another pair of museums just outside the archaeological area that provide additional context to Teotihuacán and what is known of its culture (and that, knowledge, by the way, keeps growing as new discoveries are made every year at a site which is still only about five percent scientifically excavated).

Interesting local options include a hot-air balloon ride over the site, and in the evening there’s now also a sound and light show. You can get here via organised tour, or independently either by hiring a car or an Autobuses Teotihuacán bus from Mexico City’s Norte terminal (guidebooks and signage can get you through the site on your own, or you can hire a guide at the entrance for less than an organised bus tour from the city). Keep in mind, please, that even if the outside temperature isn’t high on the day of your visit, the sun is relentless, and there’s not a lot of shade. So sunscreen, hats, and bottled water are highly recommended.