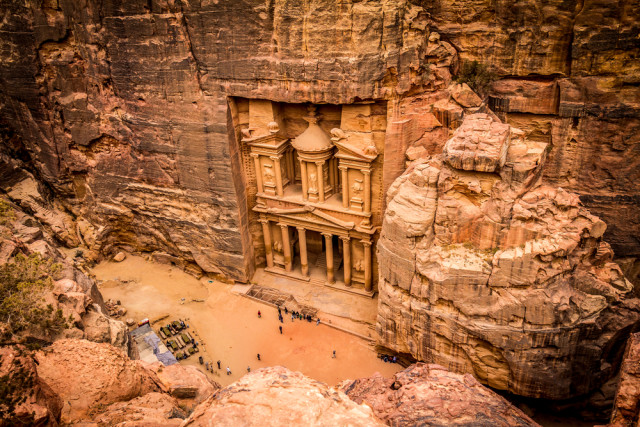 Big news in the archaeology world this week, and it has to do with this legendary site tucked into the sandstone canyons of a valley running from the Dead Sea to the Gulf of Aqaba – one of those places, in fact, you could almost believe was invented as a set for an Indiana Jones-type movie.

Well, while Petra did in fact make a key and dramatic appearance in Indiana Jones and the Last Crusade, this is no film set. Instead, this fabled UNESCO World Heritage Site is a city hewn out of the living rock, with a history stretching back to the 2nd century AD but abandoned around the 7th century AD and lost to the outside world until the 19th century. Truly one of the wonders of the world in every sense.

Popular as an overnight excursion and even day trip from both Jordan’s capital Amman and Israel cities like Jerusalem and Iberia gateway Tel Aviv (an hour’s drive away), the city known to its founders, the Arab Nabateans, as Raqeem covers 264 square kilometres (102 sq. miles) tucked behind towering red sandstone formations amidst the arid badlands of southern Jordan, traditionally inhabited by Bedouin tribes who now make receiving, guiding, and feeding tourists a significant part of their income.

The famous view we all recognise, the so-called Treasury with its classical Hellenic columns, reached at the end of the Siq, a winding passageway through a narrow, 600-foot-tall canyon, is just the most iconic corner of this complex – at its peak, home to more than 30,000 – at the centre of a vast trading empire particularly specialising in frankincense and myrrh. 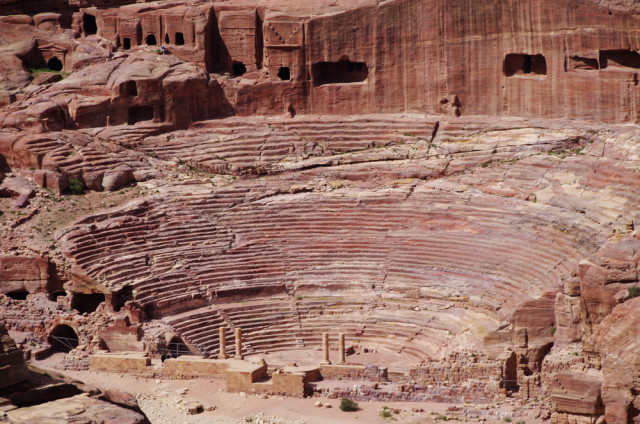 Today, visitors can among roam fabled, fabulous structures carved into the sandstone cliffs, such as a 4,000-spectactor amphitheatre (above), monumental tombs, temples, gates, and more. To get additional context, besides guide explanations there’s a visitors’ centre in the nearby town of Wadi Musa.

Speaking of wadis (which means valley or ravine in Arabic ), many visitors also combine a visit to Petra with a stop in Wadi Rum, a desert wilderness area some 90 minutes away; it’s a mix of sites both historical/archaeological (another Nabatean temple, for example) and natural (canyons, oases, arches).

Petra is still being extrensively surveyed and explored by archaeologists and other scientists, with new discoveries still being made. For example, just this week came word that less than a kilometre south of the main city, an enormous platform unlike anything else here has just been discovered, and the team responsible promises more “pretty amazing discoveries” over the next year. All of which adds to the mystique and fascination of an ancient city like no other – an absolute must for your “before-you-die” bucket list.

Best fares to Tel Aviv from the USA, from Spain.