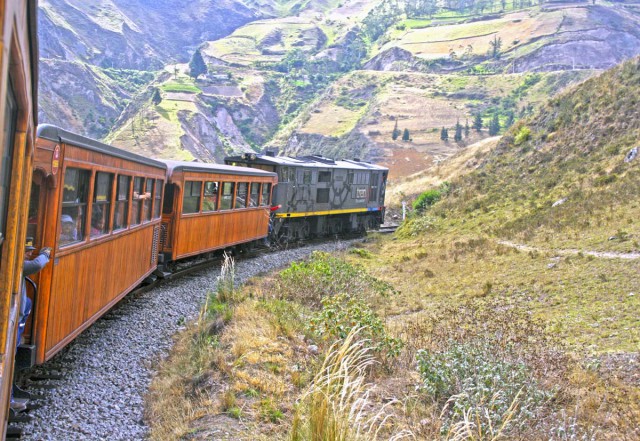 If there’s a single means of transport today that most preserves some of the old-time romance of travel, it surely must be rail travel, thanks to its close-to-the-ground, human scale, and in many countries, rolling stock which is literally vintage. Latin America is a good example – though these days intercity rail travel in the region is limited, the trains still in service run through some lovely landscapes, and many are throwbacks to the past. A prime example is Ecuador‘s elegant Tren Crucero (“Cruise Train“), recently resurrected to run on a narrow-gauge line from Guayaquil on the coast up to capital Quito in the Andes.

Nominated as 2016’s as South America’s Leading Luxury Train by the influential World Travel Awards, (to be presented this July), this four-car wooden train takes you on a four-day journey through some of the continent’s most spectacular scenery, thanks in part to a short but notoriously nervewracking stretch of switchbacks carved into the side of a mountain known as Nariz del Diablo (Devil’s Nose, also known to locals as Cóndor Puñina – Condor’s Nest – though the condors are long gone, driven away by the railway’s construction).

If you’re short on time, or on cash to cover the entire four days and three nights (which costs $1,200 per person, kids $952, including hotels, meals, and excursions en route), you can choose to only do the Devil’s Nose stretch, which has been called the world’s toughest. It was a reputation acquired early on, during and after its construction in stages ending in 1908. The difficult topography of the Andes, the shortage of labour, and the rainy climate which causes landslides and terrible tropical diseases were what gave this railway the reputation as being the most difficult in the world. 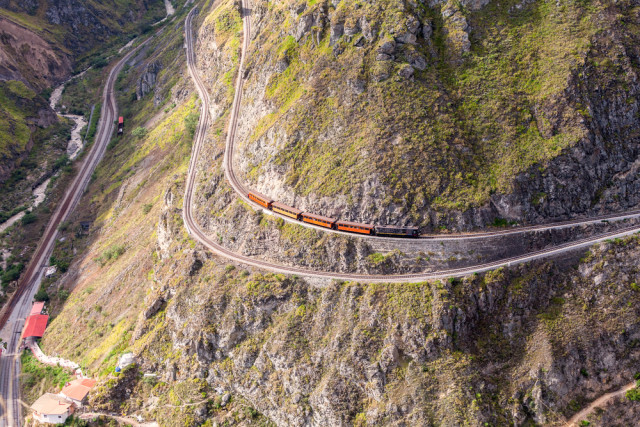 To board at the southern end of this stretch, you have to go to the city of Riobamba (just over three hours by road from Quito, just over four or an hour’s flight from Guayaquil), then from there to a Alausí, a little town where time seems to have stopped.

The trickiest bit along this stretch comes right at the beginning, the incline between Alausí and the Sibambe stations, rising 2,945 metres (9,662 feet) over just 56 kilometres (34 miles). The only practical way to get a train up this steep slope was a zigzagging series of switchbacks, making for an impressive sight and experience indeed. In fact, back in the old days, the Devil’s Nose stretch did acquire something of a devilish reputation. Some passengers fainted and reported strange images, and others became so frightened they would get out and continue on horseback or even on foot.

So who’s up for a grand adventure? 😉

Best Iberia fares to Guayaquil from the U.K., from Spain.