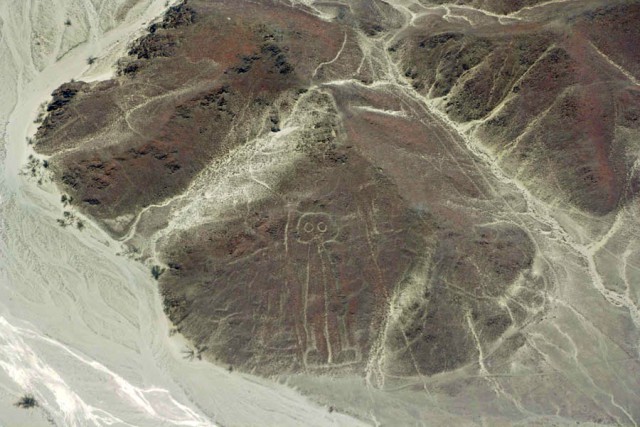 In the middle of Peru’s parched, dusty Nazca Desert, you’ll find one of the world’s most fascinating archaeological enigmas: the Nazca Lines. These are ancient geoglyphs located on the Pampas de Jumana between the towns of Nazca and Palpa, a 5½-hour drive south (or hour’s flight) from capital Lima.

Looking like some adventure film set, this bleak setting showcases gargantuan shapes painstakingly fashioned between 500 BC and 500 AD by the mysterious civilisation which once inhabited this place. There are many different theories about this enormous, enticing enigma. The American Archaeological Association, for example, offers up various interpretations and new discoveries that shed some light on these lines in the desert. But it turns out there are more questions than answers.

The Nazca Lines became famous when Swiss author Erich Von Däniken published the book Chariots of the Gods in 1968. In this, he asserted that the lines were landing strips for interplanetary spacecraft. The reality is more down to earth (though amazing enough in its own right), but the publicity from the book ignited the imaginations and interest of many around the world, leading to the Nazca tourist industry that exists today.

More scientific explanations have come to us from Maria Reiche, a German archaologist and mathematician who arrived here in the 1940s and never left, captivated by the mystery and dedicating the rest of her life to researching their origins and meaning; thanks to her work, they were listed as a UNESCO World Heritage Site in 1995. Today you can visit the museum, located right on the edge of the desert and named after Reiche, to learn more about her story and of course the lines themselves.

Nazca and Palpa are dry, dusty towns, the former of which is the one mostly focused on tourism; from Lima you can take a comfortable bus which takes no longer than seven hours in normal conditions. 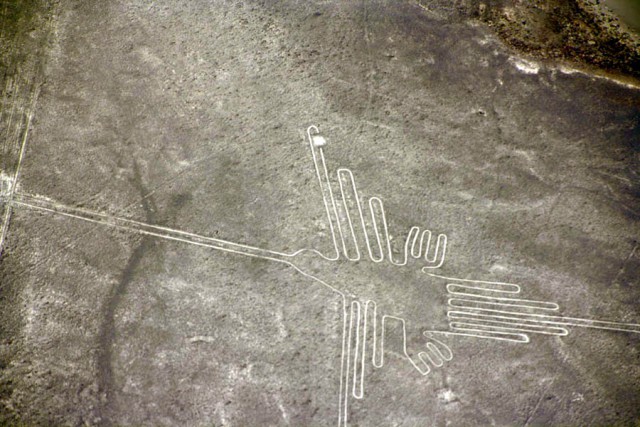 It’s commonly believed that the Nazca Lines can only be seen from the aeroplanes that fly over them; but this is not true. There’s an overlook on the motorway near to the Maria Reiche Museum from where you can view them (although admittedly the shapes do look even more spectacular when seen from the air). For this, you can head to the little Nazca Airport, where companies operate tourist flights; if you don’t get airsick (it really is something of an an extreme flight that twists and turns like an air acrobatics competition) you can get a dramatic eyeful of the various shapes and lines that make up one of the world’s greatest archaeological mysteries.

Some of the lines represent shapes such as the hummingbird, monkey, spider, tree or hands – but for many, the most intriguing is the shape is called that can be seen on the hillside, appearing for all the world to be a human wearing a kind of spacesuit. “The astronaut” is perhaps the single most powerful driver of the Chariots of the Gods theories of ancient alien contact. Scientistts, though, say it’s more likely the stylised figure of a fisherman.

Close to the lines, there are some places that shed more light on them, such as the cemetery of Nazca de Chauchilla with its visible mummies or the lost city of Cahuachi, the ceremonial centre of this enigmatic culture that created these drawings and lines in the desert.

All in all, a most fascinating bucket-lister for the curious traveller.