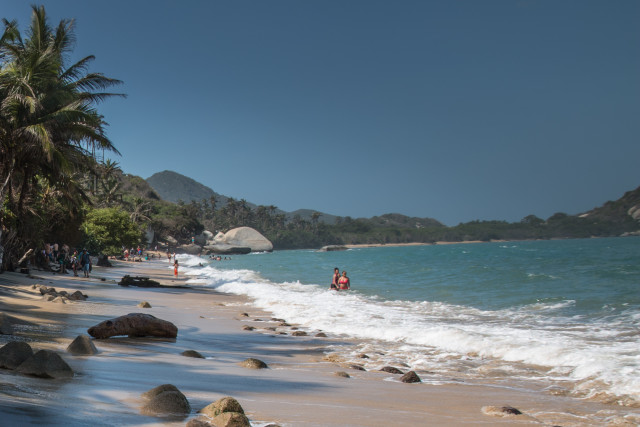 The foothills of the world’s highest coastal mountain range, the Sierra Nevada de Santa Marta, meet the Caribbean at Tayrona National Natural Park, Colombia’s second most visited national reserve. The promise of dramatic scenery where the jungle slopes down to the sea lures a mix of visitors (especially from Barranquilla, just over two hours’ drive west or Cartagena, some four hours away) fanning out along sandy coves enjoying a break from the city.

Beach life is the reward at the end of a trek to reach this earthly paradise named for the Tayrona, the first indigenous people encountered by the Spanish in South America, back in 1499. Tayrona attracts day-trippers staying nearby, perhaps 32 kilometres (20 miles) away in the city of Santa Marta or the fishing village Taganga, as well as those planning to overnight in the park itself. Backpackers camp out under the stars or sleep in hammocks. Popular ecohab bungalows and cabins book up well advance during high season for people looking for a more comfortable night’s sleep.

The only dilemma – apart from having to avoid the occasional falling coconut – is to choose the right beach for the day. Distinct in character, several beaches can be reached by short, easy-to-follow wooded trails. The main park gates are at El Zaino, where visitors gather to watch a short orientation film on the 180 square kilometres (70 sq. miles) of land and sea that make up the park and pay the park entrance fee, 39,500 pesos (around  £9/11 euros/US$12). It’s a short minibus ride or 40-minute walk to a trail leading to Cañaveral Beach, dotted with turret-shaped ecohabs – palm-roofed huts built mostly from natural materials – peering over the tops of trees out toward the Caribbean. Vehicles are not permitted any farther into the park, so hikers pass plenty of mules laden with heavy backpacks, traipsing along narrow forest trails and onto the next destination. It’s a shaded hour’s walk to Arrecifes, a rocky and more exposed beach that’s beautiful to look at but too dangerous for swimming. 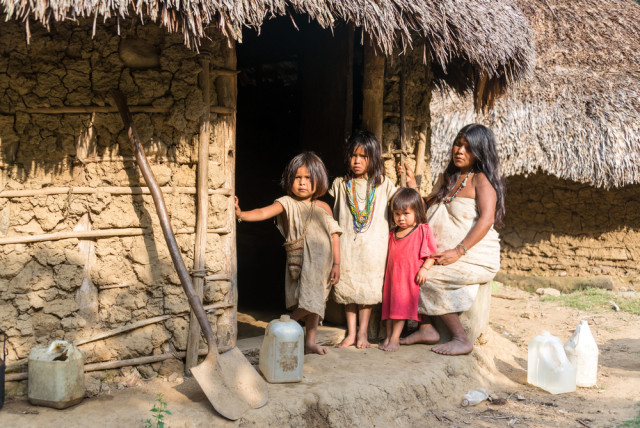 Passing through vibrant green mangroves back into the forest, it’s not uncommon to meet a member of the 20,000-strong Kogi tribe, believed to be descendants of the Tayrona people who fled centuries ago into the Sierra Nevada de Santa Marta mountains. Dressed in white, Kogi kids sell coconuts or fresh fruit. Tourist entrance numbers are restricted daily to protect the environment and the home of the Kogi, so day-trippers should plan to arrive early. Plastic bags and bottles are banned from the park to ensure it doesn’t end up like other neighboring areas such as the mangroves between Barranquilla and Santa Marta, parts of which are choked with luminous plastics.

Hikers have a greater chance of meeting the Kogi on the journey to Pueblito, the terraced ruins of a pre-Hispanic settlement. Minibuses drop tourists at the park’s Calabazo entrance, from where it’s a three-hour hike to Pueblito then a further one and a half hour to Tayrona’s beaches for a well-deserved rest. It’s a fairly strenuous hike but early in the morning there’s the possibility of encountering wildlife such as the mico tito, the critically endangered cotton-top tamarin monkey. 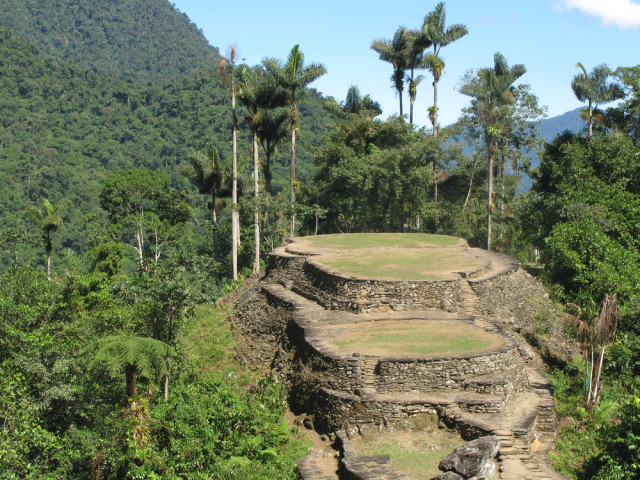 The Sierra Nevada de Santa Marta has been described as the world’s most important concentration of endangered wildlife on the planet. In the past, it was scarred by drug crops and off limits to tourists because of the dangers posed by Colombia’s notorious drug cartels.

Now safe, it’s also home to one of South America’s most extraordinary archaeological sites, called the Ciudad Perdida (“Lost City”), Colombia’s Machu Picchu. Believed to date back to the ninth century (making them 650 years older than the legendary citadel of the Incas), they’re undeniably scenic and fascinating, but also much harder to reach – a grueling five- to six-day hike from the start of the trail east of Tayrona at El Mamey to Teyona, as the locals call the former settlement, a series of small plazas and over 160 terraces cut into the mountainside, with new ones still being uncovered from dense jungle. It’s a trek recommendable only with an experienced guide.

Back in Tayrona, the next beach west of Arrecifes is La Piscina (top), named “The Pool” because of its natural wall resembling the side of a swimming pool, where coconut husks are rolled by the tide. It’s a popular spot with Colombian holidaymakers taking a dip in the ocean. Farther west, Cabo San Juan del Guia is the end destination for many in the park. It has a busy beachside restaurant and camping ground, two hours’ walk from the main park entrance. The draw is the idyllic setting of the aquamarine sea and gentler waves either side of a little peninsula with palm-fringed, golden sands.

There’s just enough time for day-trippers to relax on the beach before heading to the park entrance and jumping aboard the minibus back (pre-arranged by hotels and hostels). An alternative, for the more adventurous, is to take the late afternoon boat, the Tibisay, that heads west to Taganga. It’s an hour’s ride and to describe it as “bumpy” would be an understatement. Not for the faint of heart, 40-odd passengers wearing life jackets cling to the sides of the large wooden boat as it cuts across swirling waves, falling and rising in walls. You pass several more bays and beaches, accessible from Taganga – albeit against the tide – their headlands appearing as soft silhouettes in the evening sun. The barefoot captain stands holding two ropes attached to the front of the boat as if they were reins, judging the movement of waves as those in his care fast learn a newfound respect for the sea.

In the distance are Colombia’s tallest mountains, named after Christopher Columbus and Simón Bolívar (the man who liberated much of South America from colonial rule). Bolivar died at the Quinta de San Pedro Alejandrino, a historic landmark and museum just outside Santa Marta. These two snow-capped peaks, around 5,700 metres (18,700 feet) high, tower over the tropical rainforest that leads down to the sandy Caribbean coast, making for a truly diverse ecosystem that ticks many dream-holiday boxes, as well.

Best Iberia fares to Cartagena from the U.K., from Spain.

Lee Howard is a London-based freelance and photographer who covers travel, arts and culture; his work has appeared in The Guardian, National Geographic, Rough Guides and Where Traveler. Follow him on Twitter at @LeeeHoward.