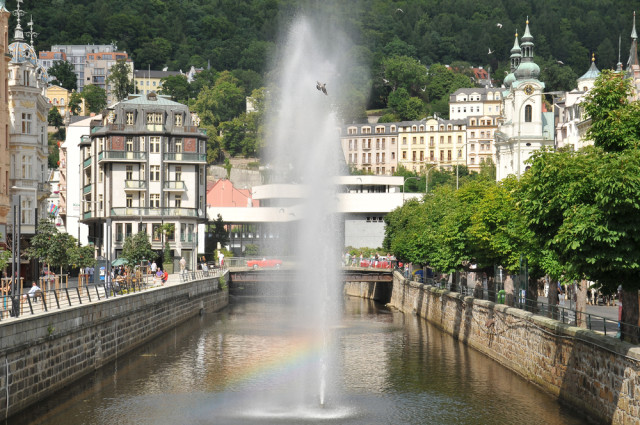 “I walk on, once again, down these corridors, through these halls, these galleries, in this structure of another century, this enormous, luxurious, baroque hotel…”

That line, from French director Alain Resnais’ 1961 film classic Last Year at Marienbad, reintroduced many in the West to the magnificent Belle Époque spas enjoyed by the European élite in Bohemia (which then became the Czech Republic between World Wars I and II) before it fell under the shadow of Nazi Germany, then the Soviet Union. When democracy returned after the 1989 fall of the Berlin Wall, these Czech spas became popular with a more democratic travelling public, and gradually modernised and capitalised on the growing trend for spas and wellness, whilst resolutely preserving their Old World ambiance (and, in many cases, style of spa treatments, which is more “medical” then you might be used to). Here are the top five.

Founded in 1793, the least internationally well known (and perhaps quietest) of the triangle of spa towns about two hours west of Prague, named after Austria-Hungary (and the last Holy Roman) Emperor Franz II, who by the way was also King of Bohemia in the early 19th century. The main attraction is its dozen mineral springs of carbonated water, touted as beneficial to the cardiovascular system (especially blood pressure and circulation), as well as rheumatism and bodily inflammation; mud treatments (the world’s first) and peat pulp baths are also big. There are other attractions, as well, such as a water park in town and nearby ecotourism options and an impressive old castle.

Another of the West Bohemia spa triangle, a half hour east of Františkovy Lázně, the country’s most famous spa city – indeed, one of the most famous in Europe – was, the story goes, founded when the entourage of King Karel (Charles) IV discovered its mineral springs in 1370 (the city’s puttin’ on the ritz this year over Chuck’s 700 birthday). Much of what you see of KV’s spa-resort section (as opposed to the regular city), however, is 19th-century Art Nouveau, Belle-Époque, and such, with the crown jewel being the Grand Hotel Pupp, including an elegant casino; originally founded as Saxony Hall in 1701; and redone as neo-Baroque in 1907 (you may’ve seen it in the 2006 Queen Latifah movie Last Holiday and/or the reboot of the James Bond flick Casino Royale). As with the other towns, summer is the most popular season (and here there are festivals to help it along, such as July’s glamorous Karlovy Vary Film Festival). KV is also known for the country’s most popular tipple, a juniper-based liqueur called Becherovka.

Near the city of Zlin in the White Carpathian Mountains of the Czech Republic’s second main region, Moravia (and a 1½-hour drive from Moravian capital Brno, 3½  hours from Prague), this charming town is less famous outside the country. But it’s been known for its curative waters since at least 1669. Most of the architecture visible today is early-20th-century Art Nouveau, early modernism, and classic Alpine-chateau style. In addition to taking the waters for digestion; bathing in them for skin and joint problems; and mud treatments; another particular speciality here is inhalation therapy for respiratory issues.

Nestled among wooded hills of the Slavkov Forest, this is another famous spa town filled with a serene feel and genteelly grandiose architecture of the 19th century, when it attracted emperors, kings, and celebrities including Chopin, Edison, Goethe, Twain,and Wagner (today it seems to specialise in older Germans from across the nearby border). Grande dame hotels here include the Grandhotel Pacifik, the Bohemia, and the Nové Lázně. One local favourite is the “Singing Fountain“, with a sound and light show in front of one of the colonnades.

Just under a couple of hours’ drive south of Prague, here the flavour is decidedly Renaissance – closer to most other historic Bohemian towns and cities than the Belle-Époque beauties of the West Bohemia spa triangle above. Set amid fish ponds where carp have been raised for centuries, there’s just one spa here, called Lázně Aurora, set in a park on the west side of town (and it’s just 41 years old). Medically, it specialises in treatment of disorders of the musculoskeletal system, rheumatic illnesses, and post-injury/post-op conditions, with a lot of peat baths and wraps; there are also weeklong or weekend relaxation/wellness programmes. Other sights include a Renaissance chateau and other lovely nearby towns such as Jindřichův Hradec.

Best Iberia fares to the Czech Republic from the USA, from Spain.