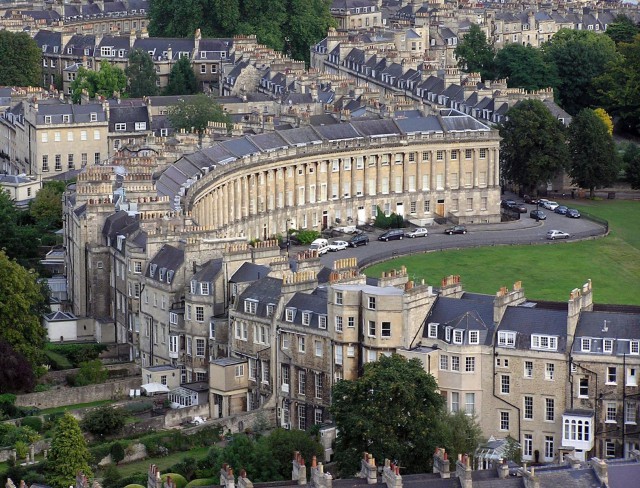 One of my very first introductions to Great Britain as a youngster was a short but sweet visit to an ancient, elegant city in the bucolic hills of Somerset some 90 minutes by train west from London (closer to three hours if you drive). A smallish, very walkable and liveable city of some 89,000, Bath could not of course be more aptly named – and a fine wallow it is – doable as a day trip but even better over a night or two. 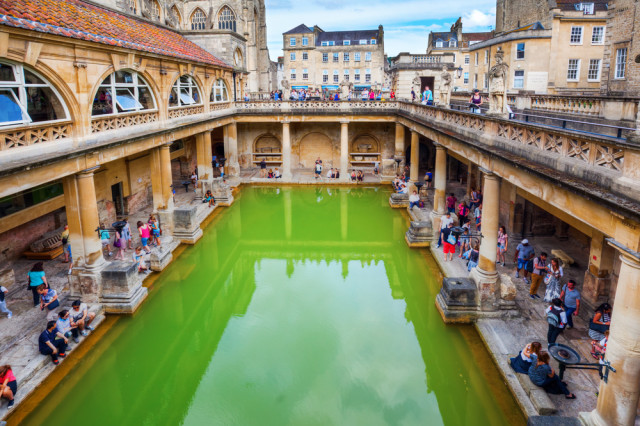 As you know, folks in the Roman Empire did love themselves a good soak, and so when natural hot springs sacred to local Celts were discovered here in the 1st century BC during Roman rule, spa complexes were not long in coming. Once the city had been properly English for more than a dozen centuries, locals in the 17th century became convinced that even beyond a good soak, these spring waters could cure what ails ye – and so the spas and attendant tourism became a booming business, and an explosion of stately Georgian architecture gave the city much of the look that defines it to this day.

The Roman thermae of the onetime Aquae Sulis (aka The Roman Baths), contained in a complex that mixes the ancient with the 18th- and 19th-century, have happily been well preserved, restored, and open to visitors just since 2006 – and it’s an absolutely fascinating experience – changing rooms, pools (including the great central pool) supplemented by informative displays on the baths, artifacts found onsite, and other aspects of the day and some docents in period costume. There are even a couple of restaurants within the complex, including the famous neoclassical Pump Room. 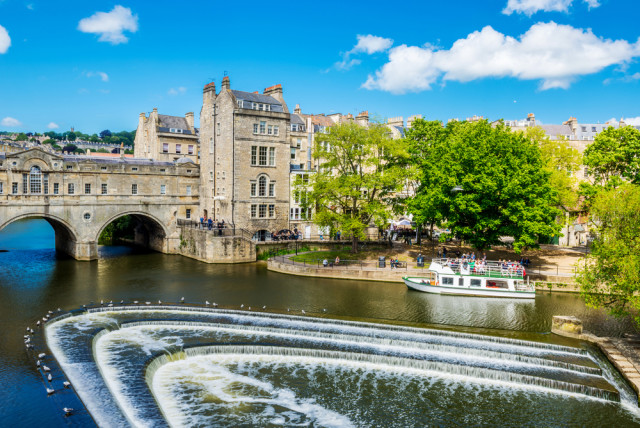 As I mentioned above, though I find the baths to be Bath’s splashiest (so to speak) draw, there is a wealth of historic architecture that is key to the city’s atmosphere, starting with the Bath Abbey, next door to the Roman Baths. Built in the early 16th-century, it has the destinction of being England’s last Gothic church (as opposed to neo-Gothic). Another singular site in the historic core is handsome, 18th-century Pulteney Bridge (above) across the River Avon, which along with Florence’s Ponte Vecchio is one of only four bridges in the world to have shops built along either side.

The bridge connects the historic centre with its relatively newer Georgian precincts – whose classic formations are its eight crescents, sweeping eliptical rows of grandiose manses, the best known of which is the Royal Crescent, dating from th 1770s; No. 1 is open to the public with period furnishings and décor); right in front here is lovely, leafy Royal Victoria Park, at 23 hectares (57 acres) the city’s largest.  (The other main park worth a look, incidentally, is the Parade Gardens back in the historic centre, a civilised little spread overlooking the river.)

There are some interesting museums hereabouts, as well. The must-visit is the Building of Bath Museum, which traces the history and development especially of the Georgian city. Another good one is the Museum of Bath at Work, chronically this city’s commercial and manufacturing side. English literature fans might also want to consider the Jane Austen Centre, devoted to the author of Pride and Prejudice and other classics, who lived here for the first five years of the 19th century.