For holidaymakers, of the great Autonomous Community of Catalonia’s four provinces, Barcelona tends to get most of the attention, closely followed by Tarragona and Girona. But west of these, Catalonia’s largest province (12,150 square kilometers/4,690 square miles) is Lleida (pronounced Lyey-da), also known in Spanish as Lérida, which is known as an agricultural heartland (especially for fruit-growing) and nature/adventure paradise, from the mountainous heights of the Pyrenees to the rich Lleida Plain. Let’s have a look, shall we? 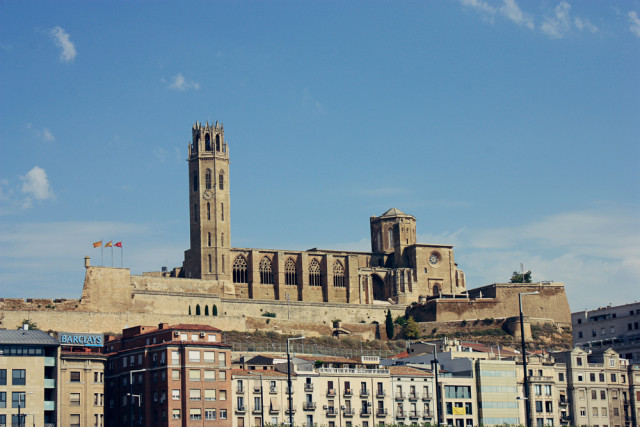 A good place to start is the eponymous capital city (pop. 137,000, metro 250,000), on the River Segre in the lowlands in the west of the province. A settlement that predates the province of Roman Hispania, when it was called Ilerda, and though less remains here of those early, early centuries than in some other major cities of Spain, there are still some remarkable landmarks, such as not one but two cathedrals. The Seu Vella is a Romanesque/Gothic affair on a hill overlooking town. It eventually was turned into a fortress, and the Baroque neoclassical Seu Nova is still in use as such today.  On the civic side, the Gothic Paeria Palace houses the city hall and many of its ancient halls, rooms, and cellars are open to visitors. The blocky, 12th-century Knights Templar Castle on Gardeny Hill is also an extraordinary must.

Museums include the Museu de Lleida, opened in 2008 with well curated displays on the region’s art and history, as well as the venerable Institute of Ilerda Studies, in a onetime Gothic hospital across from the Seu Nova, with a mix of archaeology and contemporary artists. Modern art is also the name of the game at the Centre d’Art La Panera and the Museu d’Art Jaume Morera. In the music arena, the main music venue is the Enric Granados Auditorium, named after the native son who became one of Spain’s  most famous composers of all time.

Particularly great times to visit the capital include mid May, when for three the city celebrates its Festa Major in honour of its patron saint, Sant Anastasi; the end of May, when the Aplec del Caragol – escargot festival – showcases not just snails but all the province’s traditional cuisine.

This fertile region offers a number of lovely touring options with different themes and activities, including a medieval castles route; a wine route showcasing Lleida wine’s ancient roots and Costers del Segre denomination of origin; and a lovely, “lake train” excursion from the capital through some of the ravishing scenery of the surrounding plains.

Lleida’s main draw for many in Spain and beyond, however, lies in its northern reaches, as the plains rise up into mountains soaring as high as 2,700 metres (9,000 feet) above sea level. It’s a spectacular region that’s become one of the country’s top meccas for skiing and adventure sports. Lleida ecotourism highlights include nature parks like Aigüestortes, Estany de Sant Maurici, El Cadí-Moixerò, and Alt Pirineu. They’re all magnets for hiking, biking, kayaking, horseback riding, caving, and fishing in mountain streams and lakes, as well as more out and out adrenaline pumpers such as river rafting, canyoning, rock climbing, mountain biking, paragliding, and hang gliding. Perhaps most famously of all, here you’ll find 11 of Spain’s top resorts for skiing, snowboarding, and other snow sports (one of the best known being Baqueira Beret).

Throughout these highlands are sprinkled enchanting old medieval hamlets, villages, and towns, which besides offering agritourism opportunities also features ancient treasures such as 10 Romanesque churches of a valley called the Vall de Boí (top); of the early Middle Ages, they’re so striking they’ve made the UNESCO World Heritage list. Another valley, the Vall d’Aran, is notable also because geographically it’s actually on the French side of the Pyrenees, and has a distinct local language related both to Catalan and French Occitan. And one of the most distinguished small cities up here is La Seu d’Urgell, whose 12th-century Romanesque cathedral is one of Catalonia’s oldest. The city is also notable for being the gateway to Andorra, one of the peculiarities of Europe as an independent principality wedged in the Pyrenees between Spain and France.

All truly part of a compelling adventure in a region that’s in many ways the heartland of Catalonia.