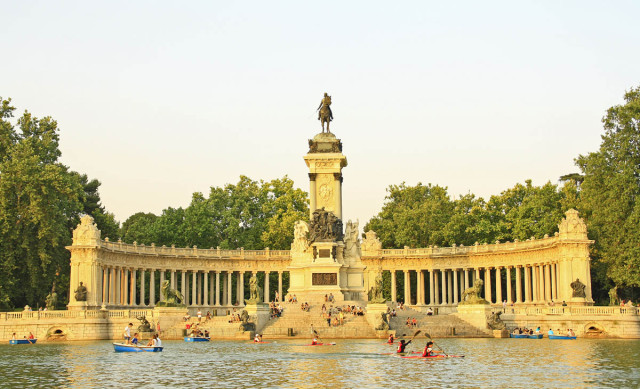 As many Madrileños return home from their summer holidays, they still have a place right on their doorstep. The Parque del Buen Retiro (“Good Getaway Park”) is 118 hectares (292 acres) in the centre of Madrid originated in the 1630s as a royal hunting reserve and playground, gifted by obsequious aristocrat to King Phillip IV.  It became a public park in 1868.

The Retiro is of course full of marvelous woods, bushes, and garden such as the lovely rose garden. And with 18 entry points and more than 50 discrete places of interest throughout the park (many described in most travel guides), you could easily spend the better part of a day here. Furthermore, each season has its special pleasures – colourful foliage of course being the top draw as we enter autumn. Come check out the great spots of the “Good Getaway”:

This is the Retiro’s focal point (top), originally created to provide water to the park’s irrigation system.  With an average depth of 1.80 metres (six feet) and a capacity of more than de 50,000 cubic metres (11 million gallons),  back in the day it used to host small-scale recreations of naval battles; today you’ll still see boats, but much smaller still: dinghies, a popular pastime most of the year. At the back of the pond is the Monument to Alfonso XII, with a semi circular colonnade and crowned by an equestrian statue of Spain’s king of the 1870s and 1880s.

Though the most iconic, that monument is far from the bit of impressive architecture in here. The red-brick-and-blue-tile Palacio de Velázquez (named after its architect, not the famous painter) was built between 1881 and 1883 for a mining/metallurgy exhibition. But perhaps the park’s most famous and popular structure is the Palacio de Cristal (below), built shortly afterward and taking London’s Crystal Palace as its model. A masterpiece of glass windows and domes supported by slender iron columns and arches. Both regularly host temporary modern art museums of the Reina Sofía National Museum. 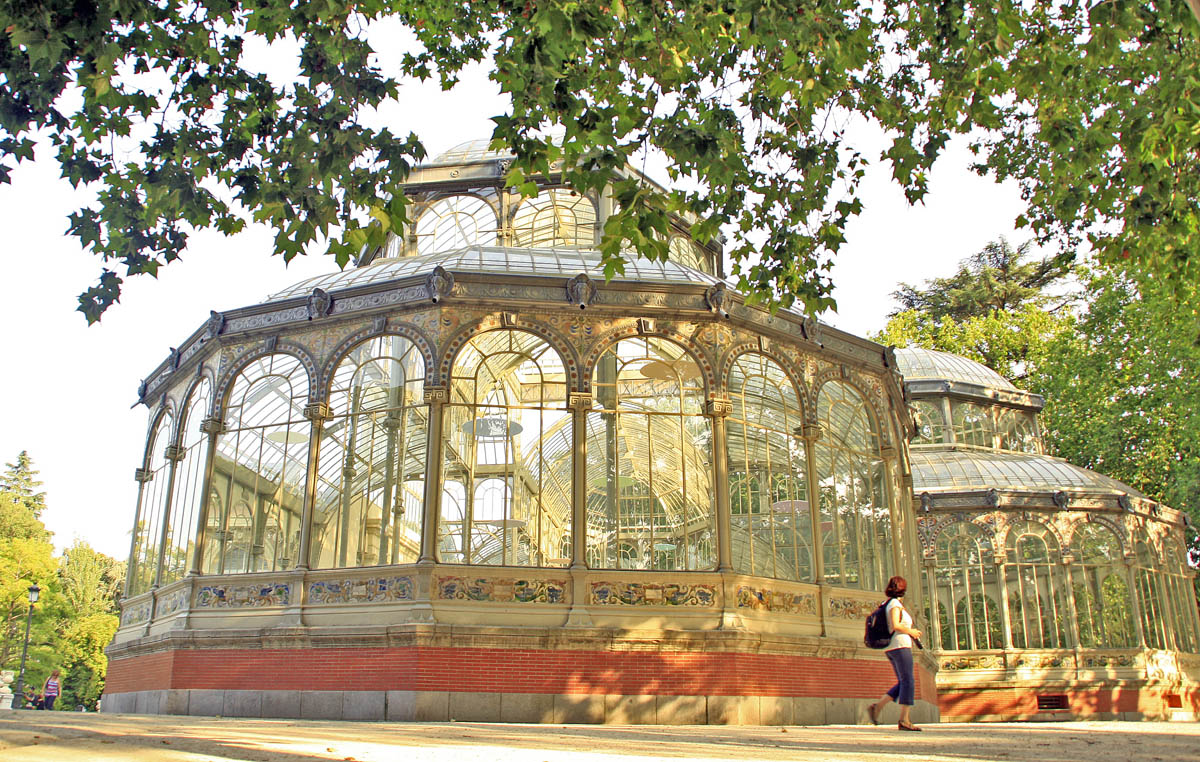 As with any formal European park worth its chlorophyll, fountains and statuary abound through El Retiro. The Argentina Promenade, leading in from the Puerta de España entrance to the Great Pond, is better known as the Promenade of Statues because it’s flanked by 94 figures of rulers of Spain throughout history.

But perhaps the park’s most notorious statue, however, is part of the Fountain of the Fallen Angel – said to be the world’s only public monument depicting Lucifer. And by the way, it turns out this bit of business happens to be 666 metres above sea level. Spooky…  ?