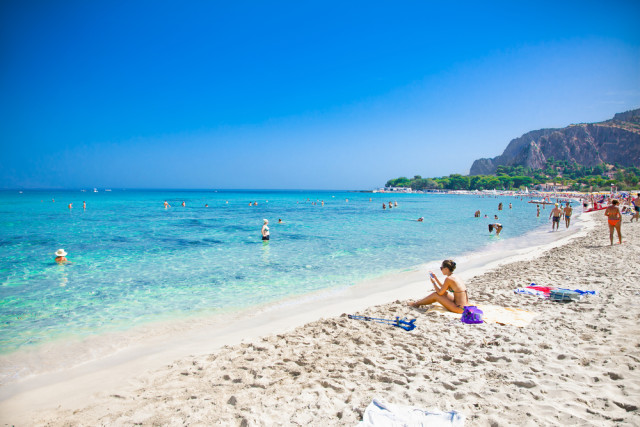 Bathed in the Mediterranean Sea off southern Italy, looking on the map like a vaguely triangular football being kicked by the Italian boot, this proud, ancient land is one of striking contrasts. Famous for among other things volcanoes like Etna and Stromboli, Sicily is also home to forested and farmed highlands, vibrant cities, awe-inspiring Roman ruins, and of course some of Europe’s best beaches.

It’s these spectacular spiaggie on which I’m going to focus here – lapped by the Tyrrhenian Sea to the north, the Ionian Sea out east, and the open Mediterranean to the south – which have attracted the Hollywood elite along with legions of holidaymakers from across Europe and well beyond.

On the east coast an easy, 15-minute ride from Taormina, this wide, laid-back stretch has dark volcanic sand which contrasts dramatically with crystalline (and consistently nice and warm) waters. It’s a full-service set-up, as well, including such as umbrella rental and public toilets.

Also down the coast from Taormina, this small town’s beach is quite popular, as well as expansive, with a mix of pebbles and sand – both fine white and dark volcanic – and calm, warm waters.

Heading up to the north coast, 70 kilometres (43 miles) from capital Palermo, the town of Cefalú offers relatively modest-size beaches of golden sand and deep blue waters. Adding to the atmosphere is the historic architecture of the old town, including a Norman cathedral.

Even closer to Palermo (just 13 km/eight mi.), this elegant port town’s beach (top) at the foot of Monte Pellegrino is popular with local families in summertime – understandably, due to its fine sand and calm, clear waters. The town’s traditional restaurants and Art Nouveau architecture complete the charm.

Finally, let’s pop down to the south coast (which has the reputation of boasting Sicily’s cleanest beaches), where the stars are a handful of golden-sand beaches along 60 km (37 mi.) of coast near the UNESCO World Heritage town of Ragusa. The surf and breezes here are a little kickier – enough so that windsurfing is quite popular.