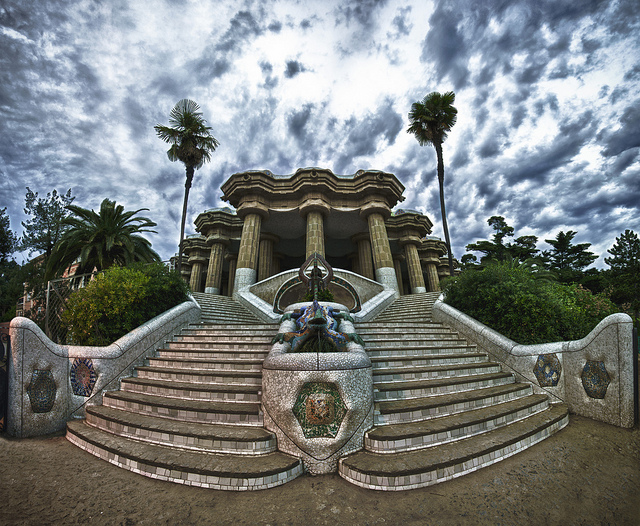 The capital of Catalonia is famously full of extraordinary sights, sites, and experiences – and it’s in summertime that a particularly outdoorsy subset of these come into their fully glory: Barcelona parks, gardens, and other green spaces, often punctuated with extraordinary architecture. Herewith its top stars:

Historically considered the “lungs” of Barcelona, this 28-hectare (69-acre) area near the coast and the 1888 Triumphal Arch presents an impressive first impression with its huge decorative fountain, complete with waterfalls. Stroll the footpaths and float around the lake in one of its rowboats. The grounds are also home to the Barcelona Zoo and the Catalonia parliament. Less well known is the winter garden, an excellent example of late-19th-century steel architecture à la Eiffel Tower; inside it’s possible to have a drink or cup of coffee.

Designed by the legendary Antoni Gaudí, in many ways his sinuous, organic architecture is the most perfect fit imaginable for the Mediterranean greenery of these relatively compact 15 hectares (37 acres), which have been a public park in 1926 (top). Accordingly, it’s almost always full of tourists year round. Take the Metro to the Lesseps station and head uphill for 15 minutes or so (alternatively, the No. 24 bus from Plaza de Cataluña will leave you right at the entrance). The footpaths provide some pleasant strolls and the pair of gingerbread houses (one of which Gaudí himself lived in) and details like a column-supposted pavillion, porticos of leaning columns, and colourful mosaic benches provide whimsical eye candy. Don’t forget the obligatory snap with the equally colourful salamander at the entrance!

One of Barcelona’s best kept secrets, dating back to 1791, this nine-hectare (22-acre) pair of gardens at the foot of Mt. Collserola manages to be both elegant and magical. Formerly part of the estate of an aristocratic family, its 18th-century neoclassical half includes the eponymous labyrinth of cypreses and statue of Eros; a pavillion a pair of templetes, and a pond, while the Romantic garden dating from the mid-19th is a bosky affair with flower beds and a waterfall. That, along with the statues of nymphs and mythological creatures, will make you feel like you’re ambling through a fairy tale. A must is the Pavillion of the Muses and a military tower left over from the 14th century. The closest Metro station is Mundet.

Entering the hallowed 15th-century main building on Placa de l’Universitat, you’d never imagine the island of peace that awaits beyond. The only sounds are birds and croaking frogs in their ponds, illuminated by light entering the courtyard of the sciences and the humanities, as well as their respective arcades. Remarkable botanical specimens abound, such as Mediterranean cypress, figs, and pines, as well as more exotically distant flora like Himalayan cedar and Argentine ombú. Sit a spell on one of the cast-iron benches and breathe in all the tranquillity and the history.

One of Barcelona’s iconic hills, Montjuïc, harbours corners of which even many locals are not fully aware. One of them is the Joan Maragall Gardens, which include a magnolia-lined avenue; a pond with fountains; and all manner of other ornamental fountains, pools, plazas; and buildings such as the Palacete Albéniz, a small palace that’s the residence of the king and queen of Spain when they visit the city. Nearby is another hidden gem, the Laribal Gardens, a symphony of luxuriant Mediterranean foliage and rosebeds that includes a staircase inspired by the Moorish Generalife palace of Granada (complete with water cascading down steps) and the Font del Gat (Cat Fountain), popular with picnicking families and young lovers alike. y disfrutar de las cascadas. It’s guaranteed toinspire a reverie from which you won’t want to wake up.