When visiting a fascinating new destination, there’s nothing cooler than staying in equally intriguing accommodations. And so here are some of the most fascinating in key #IberiaDestinations in Latin America.

Mendoza province is the heart of Argentina wine country, Latin America’s number-one source of the fruits of the vine, and its growing wine tourism industry has in recent years given rise to some superb hospitality options. One of the most interesting is the exclusive Hotel Champagnerie Casa Margot, a pair of rooms adapted from historic brick wine cellars on a 27-hectare (67-acre) vineyard devoted to growing grapes for sparkling white méthode champenoise wine. Between the vaulted ceilings, tango clases, beef, and of course Malbec and sparkling wine, this is one terrific terroir.

Sao Paolo’s Hotel Unique is one of this country’s most avant-garde buildings and a well known local landmark whose design has won various architectural awards. Up in the jungle not far from the Amazon capital Mamaus, the five-star Ariau Amazon Towers is along similar lines is a gimongous seven-tower complex connected by eight kilometres (five miles) of walkways.

When it comes to boutique digs, Argentina’s long, skinny next-door neighbour goes in for eco-elegance in choices like extreme-south EcoCamp Patagonia, based on ancient Indian designs and a sustainable relationship with nature. Probably the most sophisicated is Hotel Antumalal, a Bauhaus-style bit of business built into the flanks of a volcano, but probably the country’s most dstinctive is Montaña Mágica Lodge, built in a UNESCO Biosphere Reserve from ecological materials by local artisans distinguished by its distinctive silhouette and waterfall cascading down its windows. 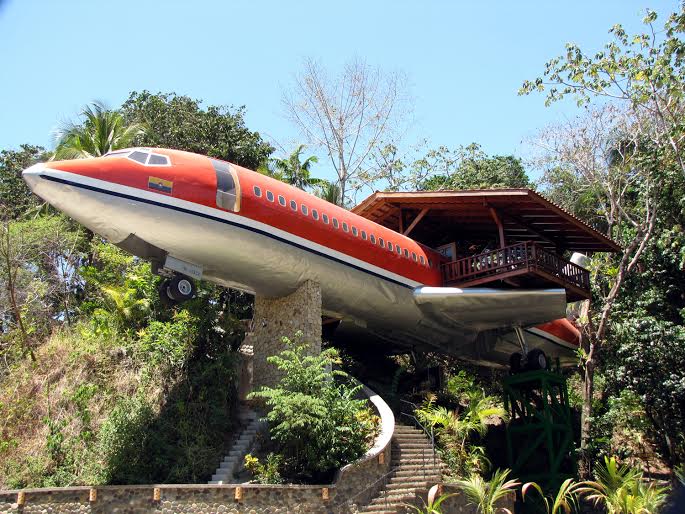 An aviation geek special awaits in Manuel Antonio’s Hotel Costa Verde, a remodeled 50-metre (foot) Boeing 727 including a luxurious, woody suite and a terrace where guests can enjoy marvelous views out over the Pacific coast. A but farther south, in the jungle outside the Osa Peninsula town of Puerto Jiménez, the four-unit Lapa’s Nest Treehouse is a six-storey extravaganza built into a tree 18 metres (59-foot) tall tree.

An hour south of Mexico City, in the town of Tepoztlán, known for its New Age vibe, the most interesting of the many local hostelries is the Tubo Hotel (top), a cluster of cement tubes. In the other direction there are several other cool options. Some 4½ hours up in San Luis Potosí, funky units include Wild-West-style teepees amid a lovely verdant setting starring a string of waterfalls. Another 2 hours farther north of here in Zacatecas, you can bed down in a real-deal bullring, the Hotel Quinta Real (above; olé!). And up in Ensenada near the U.S. border in Baja California, the 20 mod-cool units of the Hotel Endémico perch atop a hill around the Guadalupe Valley.

Perhaps one of the most unique accommodations not just in LatAm but in all the world, the Canopy Tower in the Valle de Antón about an hour from Panama City was once a U.S. radar installation and since 1999 is considered one of the world’s premier eco-hotels. In addition to access to a diversity of flora and fauna (birders will especially be in heaven), its unique location affords a panoramic view of the Panama Canal and the capital skyline.

Near the famous beach resort city of Punta del Este, Laguna Garzón is a hotel floating on a lagoon, with just 12 rooms and ecotourism activities conceived to allow guests to commune with nature.