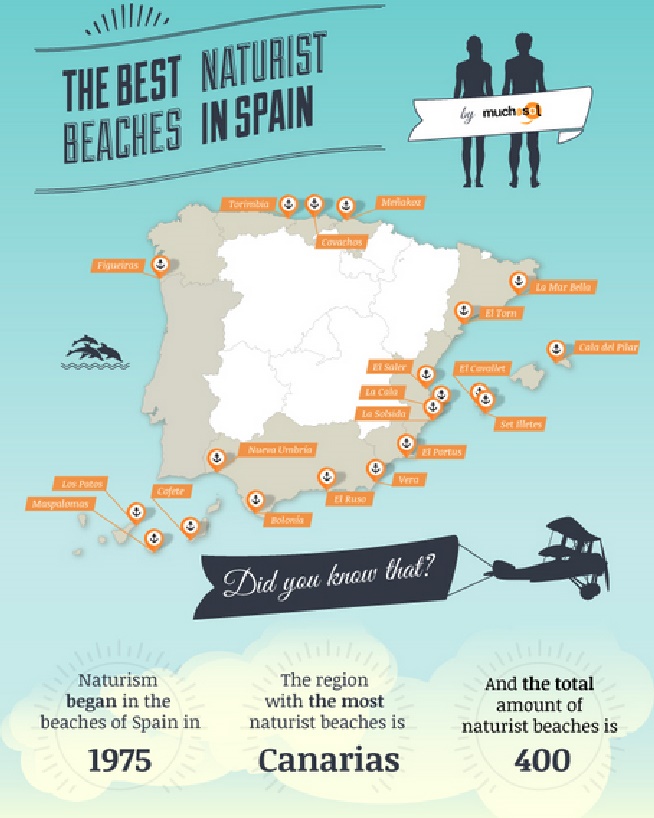 Thinking of coming to the playa in Spain this summer? Well, if you’re also a fan of all-over tans, nude beaches mark 40 years in this country, which has sprouted a whopping 400 where you can swim starkers and sun your bum to your heart’s content. Here are 20 of the top choices! 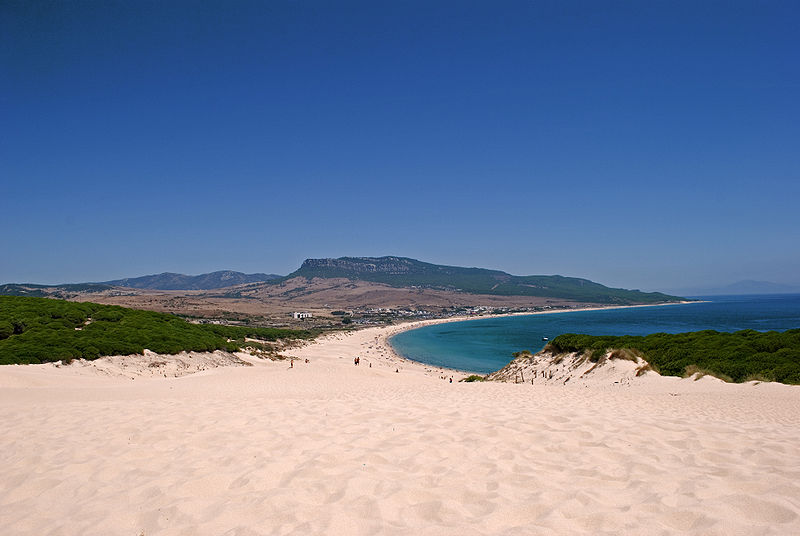 Bolonia (Tarifa, Cádiz)  One of Cádiz province’s loveliest and most popular strands, with turquoise waters and natural pools created by the rocks; its far left end, called El Chorrito, is designated nekkid.

Nueva Umbría (Lepe, Huelva)  On Huelva’s west coast, 40 minutes from Huelva city, you can strip down in the central section of this unspoiled stretch a whopping 12,000 metres (7 1/2 miles) long.

Vera Playa (Vera, Almería)  In this famously nude-oriented beach community 10 km (seven miles) from the slightly inland town of Vera, the top clothing-optional area is toward the north in an area called El Playazo. (site of the Guiness World Record skinny dip). Spain’s only nudist hotel Vera Playa Club Hotel, is located nearby.


Cala del Pilar (Menorca)  At the foot of a cliff on Minorca’s north coast, northeast of the city of Ciutadella, this a u-shaped cove has reddish-golden sand and calm, shallow waters. It’s a little bit of a hike to get to, though – nearly two kilometres (just over a mile) on a path through woods.

Es Cavallet (Ibiza)  A drive of just 15 minutes or so from Ibiza town, you’ll find a picturesque setup tucked behind dunes, a woodsy strip, and an area of salt flats and boasting lovely nwhite sand and turquoise waters. There are several restaurants, kind of a party atmosphere, and at the far end a gay scene.

Ses Illetes (Formentera)  Sunbathing in the buff is permitido on all the beaches of the smallest Balearic island, and this is Formentera’s premier strand, a paradisiacal spit of sand on the north coast across a lagoon from the island’s main town Sant Francesc, lapped by crystalline azure waters, and surrounded by lush scenery.

Meñakoz (Sopelana/Barrika, Vizcaya)  With some of Europe’s biggest waves (and therefore a favourite of surfers), this cove 24 km (miles) east of Bilbao is stony rather than sandy, windy,  and backed by cliffs. Access is down on foot via a long path.

Cofete (Pájara, Fuerteventura)  Down on an isolated stretch of the windward coast of Fuerteventura’s southernmost Jandía Peninsula, this 12-km (-mile) beach , strong currents, and is a bit of a production to get to, via bumpy dirt roads. Well worth it, say fans!

Maspalomas (Gran Canaria) At this island’s southernmost point, one of its most famous beaches is famous for the huge sand dunes behind it. The main stretch is usually fairly crowded, the clothing optional sections a bit less so. 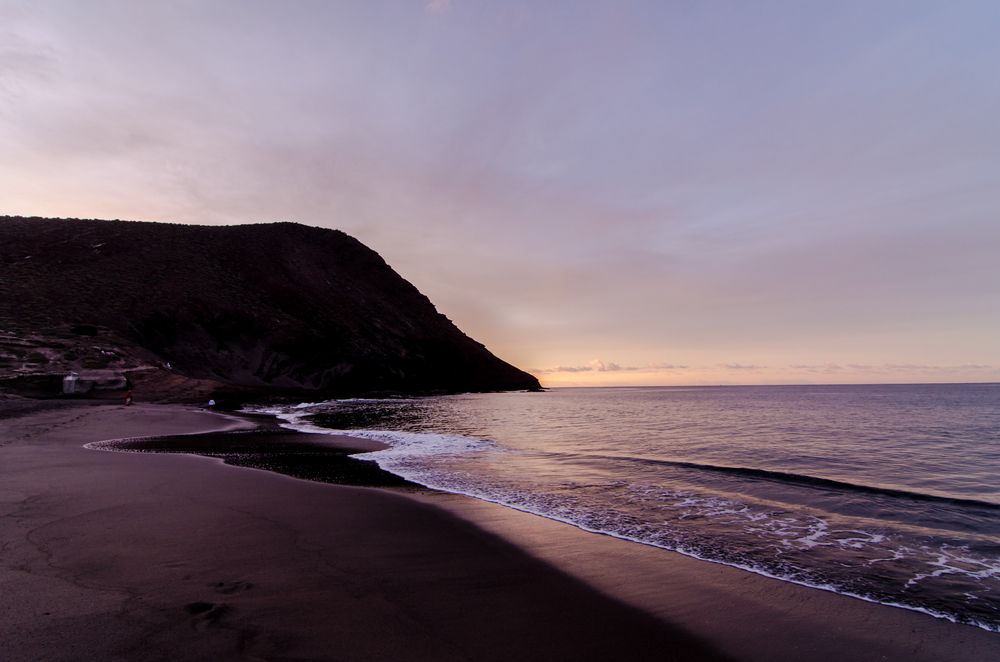 Los Patos (Tenerife)  The volcanic-black-sand “Ducks Beach”, in one of a trio of coves just outside Puerto de la Cruz, below Orotava. It’s a little tricky to find – then involves negotiating a steep trail down to the sand. 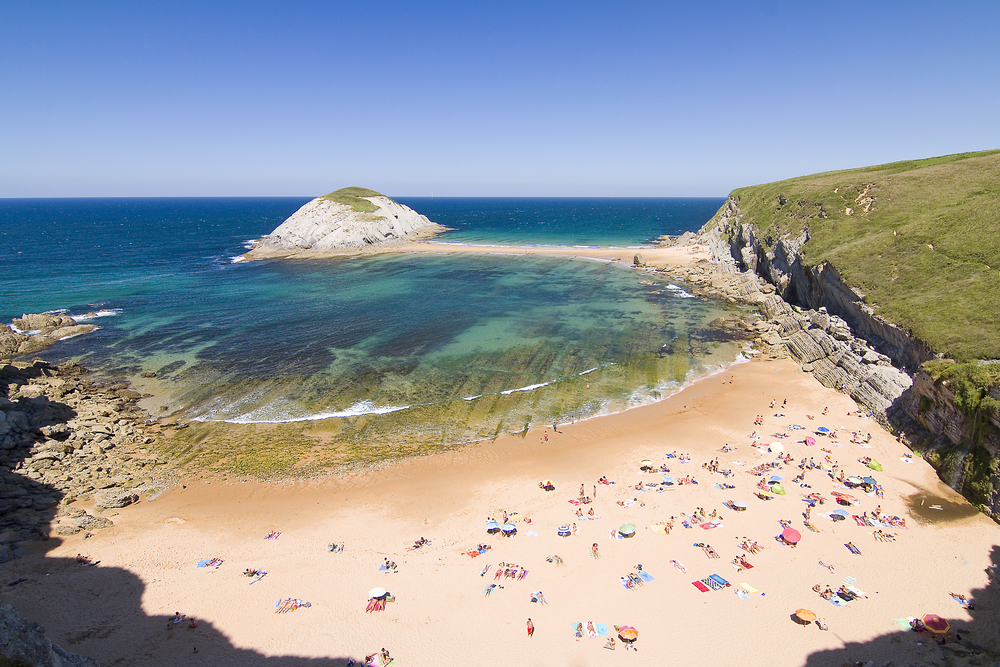 Covachos (Santa Cruz de Bezana, Cantabria)  Considered one of Cantabria’s loveliest beaches, this 690-metre half moon with fine golden sand is framed by limestone cliffs and located just across from the even more sheer cliffs of Castro Island (which can be reached on foot at low tide). It’s some 10 kilometres (seven miles) west of Santander.

La Mar Bella (Barcelona)  Brought into being on Barcelona’s Poblenou waterfront by the urban renewal generated for the 1992 Olympics, this four-kilometre (-mile) city strand between two breakwaters along the Passeig Marítim promenade is popular especially with young people, gay folks – and nudies, yay.

El Torn (Vandellòs/Hospitalet de l’Enfant, Tarragona)  Fine sand and crystal waters backed by low woods, this tranquil, 1,400-metre (-foot) gem of a naturist beach is near the resort town of Salou. There’s easy on-foot access, and a nudist campsite nearby.

Figueiras (Cíes Islands, Pontevedra) In a lovely natural setting out on the islands across from the city of Vigo, this strand with 350 metres (1,150 feet) of white sand and chilly Atlantic waters is one of the most popular in Galicia, as well as particularly popular with folks who like to take their clothes off.

El Portús (Cartagena)  A rocky, sheltered cove some 10 km (six miles) from downtown Cartagena is home to a pebble beach that’s one of the Mediterranean coast’s bum-baring meccas, with a nudist colony right alongside. Amenities include a chiringuito (snack bar) and toilets.

La Cala de Aiguadolç (Dénia, Alicante)  In a nature reserve a short hop south of the popular resort city of Dénia is another discreet clothing-optional cove with a petite (80-metre/262-foot), pebbly strand, fine snorkeling, and nearby restaurant.

El Saler (Valencia) South of Valencia city and a five-minute stroll south of the town of El Saler is one of the region’s more popular beaches, some 2,600 metres (8,530 feet) of tawny sand with clothing-optional areas next to the Albufera Nature Reserve.

La Solsida (Altrea, Alicante)  On a pebbly, semi-wild, 800-metre (half-mile) stretch amid lush vegetation just north of the marina of a resort town (20 minutes north of Benidorm and 45 to Alicante city), there’s a zone that attracts enthusiasts of bathing-costume-free beaching.